Focusing on work can be a great distraction during difficult times, and it seems Kylie Jenner’s BFF is doing just that. Jordyn Woods’ photos from a recent trip to London suggest she’s moving on from a month of scandal and choosing to keep her head up. Woods will be promoting her Eylure x Jordyn Woods Lashes collection while in England, according to People. The trip represents a return to the spotlight following a turbulent couple of weeks.

To quickly recap, in February, rumors that Tristan Thompson hooked up with Woods at a party surfaced on sites like TMZ and Hollywood Unlocked. Thompson and Khloé Kardashian’s split was reported shortly after those claims spread, according to Elle. (Bustle previously reached out to reps for Woods, Kardashian, and Thompson about the situation, but did not hear back.)

Based on her latest social media posts, it’s clear that Woods is now looking to leave the scandal behind and focus on her business ventures. On Monday, March 25, Woods shared a set of photos from London on Instagram, showing off her athleisure look. The post is likely to be the first of many social media updates from the trip, since she wrote in the caption, "Happy to be back good morning London. don’t mind all of the photos I’m going to be posting this week." She shared additional updates in her Instagram Story, offering fans a closer look at her accessories and appreciating the sunny weather from the backseat of a cab.

This trip overseas is well-timed, and it seems the launch of her line has been in the works for a while. On Friday, Woods teased the launch of the collection via social media. The Boohoo designer posed for a casual picture on Instagram, writing in the caption, 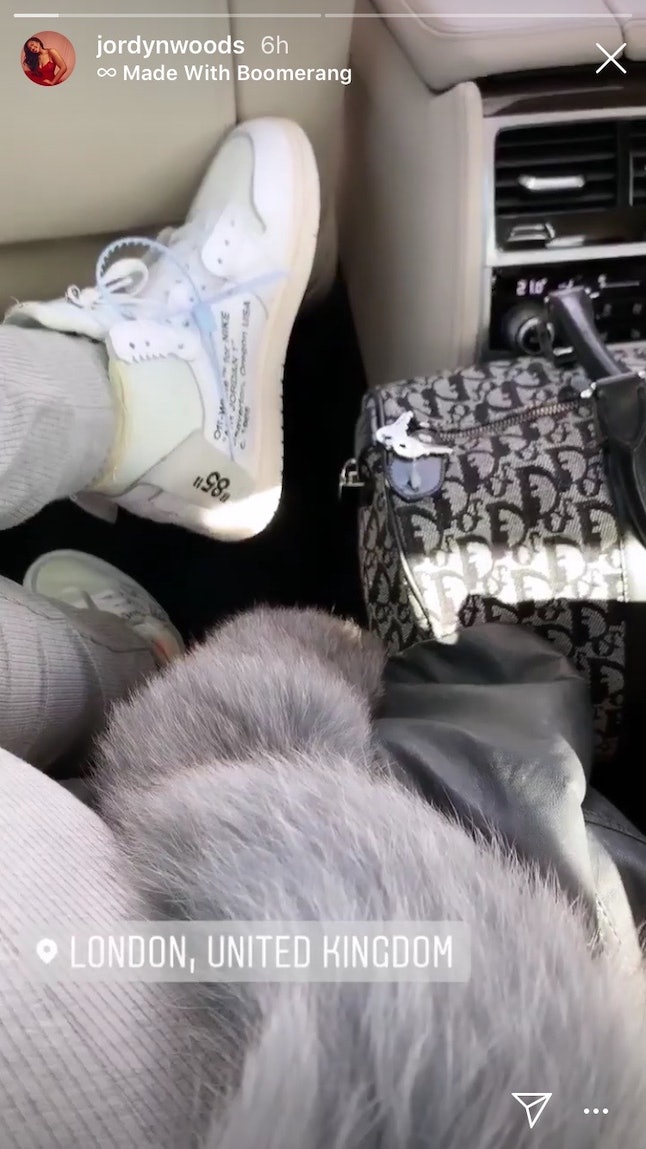 It’s clear the model is excited for the chance to explore London, and she has been keeping things positive on social media as of late. On March 8, Woods shared a selfie, including a message that suggested she was looking to the future. She wrote:

After the scandal broke, Woods appeared on Jada Pinkett-Smith’s show Red Table Talk. During the interview, the model emphasized that she wasn’t trying to hurt anybody. "I’m no home wrecker,” Woods said. “I would never try to hurt someone’s home, especially someone that I love. And someone that I’ve seen has a beautiful daughter. I never was trying to steal someone’s man.” She also denied hooking up with Thompson, describing the incident as a kiss and nothing more.

Meanwhile, the Kardashian-Jenner family is looking to leave the situation behind them as well. On Twitter, Khloé Kardashian wrote the situation was exhausting for her. On March 2, she tweeted,

Kardashian also tweeted that she planned to focus on family following the drama. She wrote, "I have to move on with my life & count my blessings, my family, my health, & my beautiful baby True."

Just like Kardashian, it’s clear Woods is moving on from the drama in February, starting with this London trip. The launch of her collection is an exciting way to keep things positive while returning to the spotlight, and it sounds like she’ll keep fans updated along the way.