John Lukacs, a maverick historian, prolific author and self-professed reactionary whose views on politics, populism and pop culture departed from those of doctrinaire liberals and conservatives alike, died on Monday at his home in Phoenixville, Pa. He was 95.

The cause was heart failure, his daughter, Annemarie L. Cochrane, said.

Mr. Lukacs (pronounced LOO-kuss) was a chronicler of modern Europe, a commentator on semantics and current events, and a romantic who lamented the vanished charm of the bourgeoisie. He lionized Winston Churchill (about whom he wrote an acclaimed study), and, while he unsurprisingly loathed Stalin and Hitler, he said, after tempering his characterization with the appropriate caveats, that the Führer “may have been the most popular revolutionary leader in the history of the modern world.”

A Hungarian refugee from Nazism and Soviet Communism, Mr. Lukacs ultimately found refuge at Chestnut Hill College, a small Roman Catholic institution, originally just for women, in a bucolic corner of Philadelphia. He taught there for 47 years.

John Wilson, a professor emeritus at Hillsdale College in Michigan, wrote in The American Conservative in 2013 that through 35 books and countless articles, essays and reviews, Mr. Lukacs “influenced and inspired (and sometimes infuriated) three generations of accomplished historians despite never having taught at prestigious universities, where he could sequester graduate students and make disciples of them.”

Mr. Lukacs’s erudite and elegant arguments reverberated with recurring themes: that history is determined by human nature and free will; that degenerating morality has delivered society to the brink of a new Dark Age; and that the Cold War was misconstrued as an ideological conflict between democracy and communism.

“Nationalism, not Communism, was the main political force in the 20th century, and so it is now,” he wrote in The American Conservative in 2008.

As much scribe as scholar, Mr. Lukacs would invoke vivid imagery to prove his points.

“When the Third Reich collapsed in 1945, perhaps as many as 10,000 Germans killed themselves, and not all of these had been Nazis,” he wrote. “When the Soviet Union and Communist rule in Eastern Europe collapsed in 1989, I do not know of a single Communist, whether in Russia or elsewhere, who committed suicide.”

Frequently quoting Alexis de Tocqueville’s warning against the “tyranny of the majority,” he defined populist nationalism as the bedrock of Communism, Nazism and Fascism in the 20th century and the greatest threat to civilization today.

Yet in Mr. Lukacs’s provocative view, as expressed in his book “The Hitler of History” (1997), the increasingly prevalent combination of nationalism and the welfare state in recent decades means “we are all national socialists now.”

He insisted that he was neither a cynic nor a “categorical pessimist.” But he wrote in his “Confessions of an Original Sinner” (1990), “Because of the goodness of God, I have had a happy unhappy life, which is preferable to an unhappy happy one.”

In 1966, when the world was halfway between the year George Orwell finished writing his visionary novel “1984” and the actual arrival of that year, Mr. Lukacs envisioned a dystopia very different from the one Orwell foresaw but equally oppressive. His version of the future, he wrote in The New York Times Magazine, was already visible in two Pennsylvania structures not far from Philadelphia: the King of Prussia shopping mall and General Electric’s Valley Forge space complex.

He saw these vast, impersonal edifices as the products of “planners, experts and faraway powerful agencies” who disregarded the will of the people — “our voices, our votes, our appeals.”

“It is a sickening inward feeling,” he wrote, “that the essence of self-government is becoming more and more meaningless at the very time when the outward and legal forms of democracy are still kept up.” 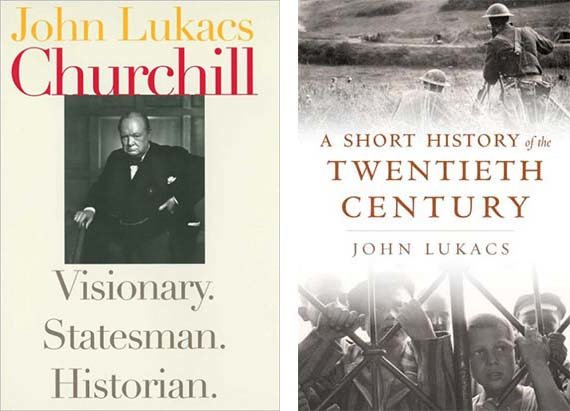 What he feared most, he added, was that “Booming Technology” was having a deadening effect, leaving people with “a sense of impersonality together with a sense of powerlessness.”

Janos Adalbert Lukacs was born on Jan. 31, 1924, in Budapest to Paul Lukacs, a doctor, who was Roman Catholic, and Magda (Gluck) Lukacs, who was Jewish.

He had an English-language tutor and spent two summers at a boarding school in Britain before earning an advanced degree in history from the University of Budapest.

Although Mr. Lukacs became a practicing Catholic, he was considered Jewish enough to be conscripted into an army labor battalion when the Nazis occupied Hungary. He deserted in late 1944, before the Germans were eventually routed.

But his hopes that life would prosper in Hungary under Soviet occupation and a Communist government faded fast. Leaving his parents, he fled illegally to the United States in July 1946 and landed in New York.

He was soon hired as a part-time lecturer in history at Columbia University to accommodate an influx of returning veterans. Chestnut Hill College hired him to teach full time in 1947.

He retired in 1994. The ground-floor library of his home in Phoenixville, in Chester County, held some 20,000 books.

In 1954 he married Helen Schofield. She died in 1971. In addition to their daughter, he is survived by their son, Paul, and a granddaughter. His second wife, Stephanie Harvey, died in 2003. He is also survived by three stepchildren, Charles and Peter Segal and Hilary Segal Felton, and four step-grandchildren. A third marriage, to Pamela Hall, ended in divorce.

Mr. Lukacs’s most notable books include “A Short History of the Twentieth Century” (2013) and “Churchill: Visionary. Statesman. Historian.” (2002). In “George Kennan: A Study of Character” (2007), he profiled the diplomat and scholar who was best known for his analysis of the Cold War (the Soviets were a manageable threat, not an evil empire). The two men exchanged hundreds of letters over the decades.

Mr. Lukacs devoted much of his career to analyzing World War II and its impact. In books like “The Last European War” (1976) and “The Duel: The Eighty-Day Struggle Between Churchill and Hitler” (1991), he viewed Nazism as a populist convergence of the sinister impulses of modern civilization that can erupt from the left or the right. And in “The Hitler of History,” he argued that Hitler’s genocidal policy toward the Jews ultimately had the unintended effect of making anti-Semitism no longer acceptable.

He hailed Churchill’s stubborn refusal to negotiate with Hitler. He scoffed at Mayor Rudolph W. Giuliani’s reference to the Blitz, as described in Mr. Lukacs’s book “Five Days in London” (1999), as comparable to the 2001 World Trade Center attack. (Mr. Lukacs said the Blitz was worse.) And he criticized Ronald Reagan for contributing to “the militarization of popular imagination,” even blaming his aggrandizement of the military role of American presidents for contributing to the United States’ intervention in Iraq in 2003.

Mr. Lukacs summed up his view of time and history in “A Student’s Guide to the Study of History” (2000): “The past is the only thing we know. The present is no more than an illusion, a moment that is already past in an instant (or, rather, a moment in which past and future slot into each other). And what we know about the future is nothing else than the projection of our past knowledge into it.”

He was not particularly hopeful about that future. A decade after he had declared himself happily unhappy, he wrote a new coda, in “At the End of an Age” (2003): “My conviction hardened further, into an unquestioning belief not only that the entire age, and the civilization to which I have belonged, were passing, but that we are living through — if not already beyond — its very end.”

“I am not a survivor,” he wrote in Chronicles magazine in 2017. “I am a crumbling remnant. A remnant of the very end of the Bourgeois Age and a remnant of the Age of Books.”