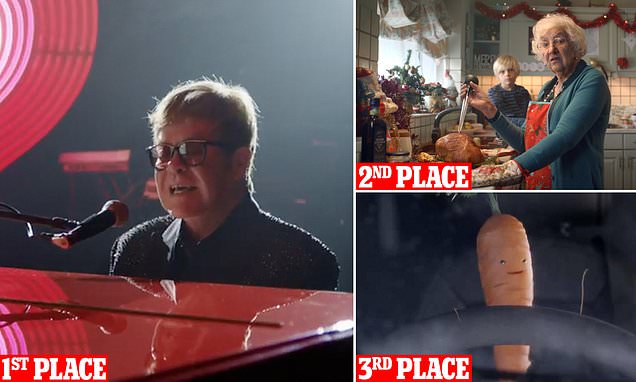 So John Lewis IS king of the Christmas adverts! Retailer’s Elton John TV spot is crowned this year’s most talked about festive campaign – while Tesco takes second place

Festive heavyweight John Lewis has beaten its rivals to be named this year’s most talked about Christmas advert.

The big budget TV spot, which stars Sir Elton John singing at a piano, set tongues wagging and prompted the biggest spike in social media engagements in the five minutes after it aired, research shows.

Tesco’s low-key campaign focusing on the joys of a family Christmas also struck a chord with viewers, earning it the second place spot.

Aldi rounds out the top three with its festive saga featuring fan favourite Kevin the Carrot. 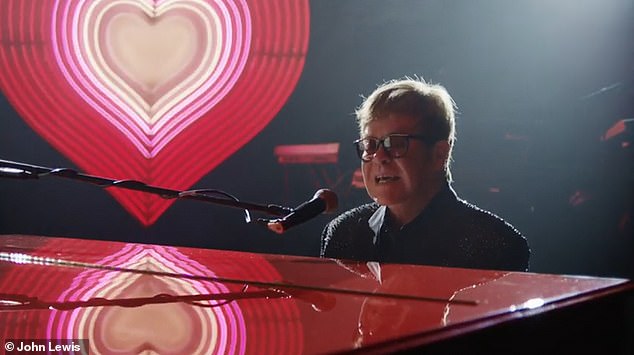 Released from early November onwards, the TV adverts battled it out to win over customers as the festive season got underway – and continue to jostle for attention as the big day looms ever closer.

Analysts from data firm 4C used artificial intelligence to scan millions of Twitter, Facebook and Instagram posts to determine which 10 adverts engaged most with viewers – an important indicator of a brand’s success.

The data also reveals which adverts received the most positive comments – or were most ‘liked’ by viewers.

John Lewis, which arguably had the most highly anticipated festive campaign, saw the biggest spike in brand mentions – 135 per cent – in the minutes after screening. 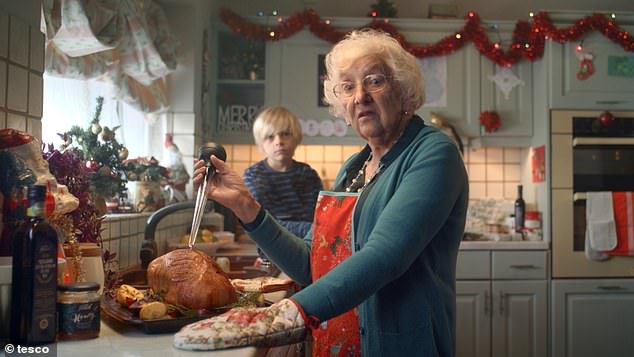 Tesco’s low-key campaign, pictured, focusing on the joys of a family Christmas also struck a chord with viewers, earning it the second place spot 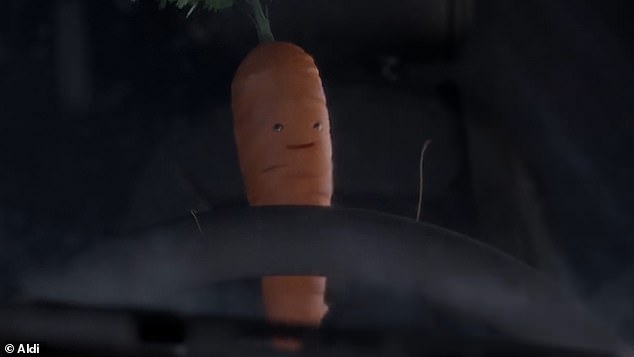 Aldi rounds out the top three of the Christmas adverts with the most social media engagement with its festive saga featuring fan favourite Kevin the Carrot, pictured

However not all of these comments were positive. Indeed research shows just 62 per cent were favourable towards the brand.

Tesco faced a similar division, coming in second in the viewer engagement but tying for last place in the positive mentions.

Morrison’s, Lidl and Asda noticed the fourth, fifth and sixth biggest spikes in social media engagements from their adverts, while Argos, Boots, M&S took the next three positions. 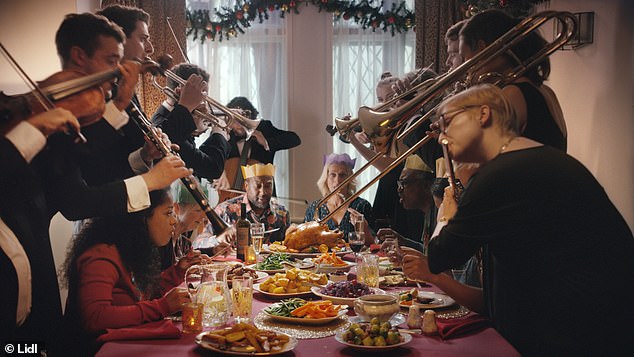 Lidl’s playful Christmas adverts, pictured, received the most positive comments on social media, according to the analysis by data firm 4C

Some 77 per cent of the comments relating to Asda’s feel good festive advert was positive, research shows

Newcomer Amazon, whose advert features delivery boxes singing the Jackson 5’s Can You Feel it?, came at the bottom of the top 10 table.

Lidl’s clever campaigns, which were a send up of its high end rivals, had the most positive reaction online, with 79 per cent of the comments registering as positive.

Argos’ mischievous fool determined to ruin Christmas failed to garner a positive reaction from viewers, with the advert tying in 10th place based on the number of favourable comments

Marks & Spencer’s star-studded festive campaign with brand ambassador Holly Willoughby paid off, with the retailer coming in third place in terms of positive mentions. However it failed to spark an online discussion and came ninth in the social media engagement rankings

‘For many of us, the first time we see the John Lewis Christmas ad will be on social media. And for those that see it first on TV, many will turn immediately to social media to comment.

‘To effectively reach multi-screening consumers, it’s now critical to take an audience-oriented approach that reaches consumers at the right place and time.’