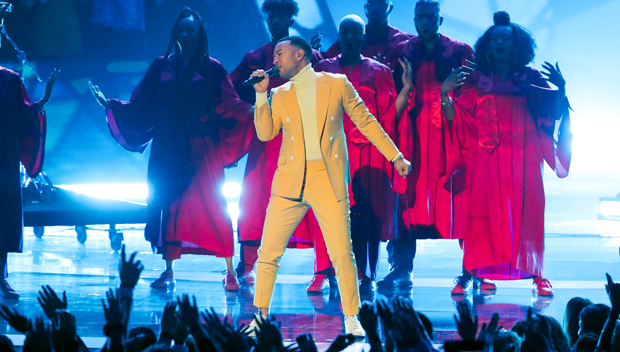 John Legend had the crowd on their feet at the iHeartRadio Music Awards in LA on March 14! The singer performed ‘Preach’ for the 1st time live in a bright yellow suit with a clapping choir.

John Legend‘s first live performance of his powerful hit, “Preach” did not disappoint during the iHeartRadio Music Awards in LA on March 14. The Grammy Award winning singer, 40, belted out the lyrics with an energetic choir in his background. He had the crowd on their feet and clapping as he danced on stage in a yellow suit. Other artists on the performance roster at the 2019 iHearts include: Ariana Grande, Alicia Keys, Halsey, Garth Brooks, Kacey Musgraves and the Backstreet Boys.

Ahead of his performance, John rocked the red carpet solo without his wife, Lip Sync Battle host Chrissy Teigen. But, the singer did not show up to the pre-show in his yellow performance suit. John’s first look of the night was a bright lilac Paul Smith suit — a Soho notch lapel two-button lilac blazer and matching slim fit trouser. He showed off his purple threads during an interview, where he dissed his hilarious other half’s new pet.

The first question John was asked was about the hamster Chrissy purchased for their daughter Luna — which Chrissy already tweeted John wasn’t too “thrilled” about. During the interview, he admitted that he is “not” a rodent guy, and is not a fan of the hamster, whatsoever. But, it’s the opposite for his wife, who recently tweeted about life as a “hamster mom.” She even basked in the glory of her love for their new pet, especially because of John’s disdain for the little creature. We highly recommend scrolling through her hamster chronicles on Twitter.

Tonight’s awards show marks the sixth year in a row that the iHearts unite loyal fans with their favorite artists. T-Pain, who is on a roll this year, is hosting the show, which airs on Fox for those who cannot attend. The rapper is fresh off his Masked Singer win, and he feels honored to take the stage as tonight’s MC.

“The blessings keep rolling in. I am grateful and honored to host this year’s iHeartRadio Music Awards,” T-Pain said in a statement after his hosting gig was announced. “The past two weeks have been incredible and the run continues. Thank you to everyone for all of the love and support. A special thanks to the iHeart team and FOX for having me.”