Kayleigh Dray is Stylist’s digital editor-at-large. Her specialist topics include comic books, films, TV and feminism. On a weekend, you can usually find her drinking copious amounts of tea and playing boardgames with her friends.

“This year was the great leveller,” Jennifer Lopez explained in her emotionally-charged People’s Choice Awards speech.

Jennifer Lopez has always been an icon to us, but now she has the People’s Choice Award to prove it.

That’s right: the singer, actor, dancer, fashion designer, producer, and businesswoman (forget triple threat; JLo’s a sextuple threat!) was named the People’s Icon of 2020 during the E! People’s Choice Awards in celebration of her work over her decades-long career.

And Rebecca star Armie Hammer, who presented JLo with her new trophy, made sure to celebrate the tenacity and drive she’s shown throughout her career, from performing at the 2020 Super Bowl halftime show in this year’s heady pre-Covid months, to kicking off her career as Selena Quintanilla in 1997 biopic Selena.

“Jennifer Lopez has always looked at the world and thought why not,” explained Hammer.

“Why not have a former fly girl rule the box office? Why can’t a bona fide movie star dominate the music charts? And why not be a little girl from the Bronx who conquers the fashion and beauty world?

“And why not become a global icon?”

“I have long admired your work and uncompromising work ethic and beautiful, authentic audacity may your passion, vision, determination, self-respect and courage,” said Zellweger, noting how Hustlers star Lopez has been “pushing boundaries all over the place for decades.”

Kidman, meanwhile, shared her own JLo anecdote, recalling how she took her sister to meet with Lopez after a two-hour concert.

“I said, ‘Are you sure she’s OK, don’t want to interrupt,’ [and they were] like come on in, and you were standing there as though you could go on again, mom there, kids there, friends there, and you were just power and love and warmth.” 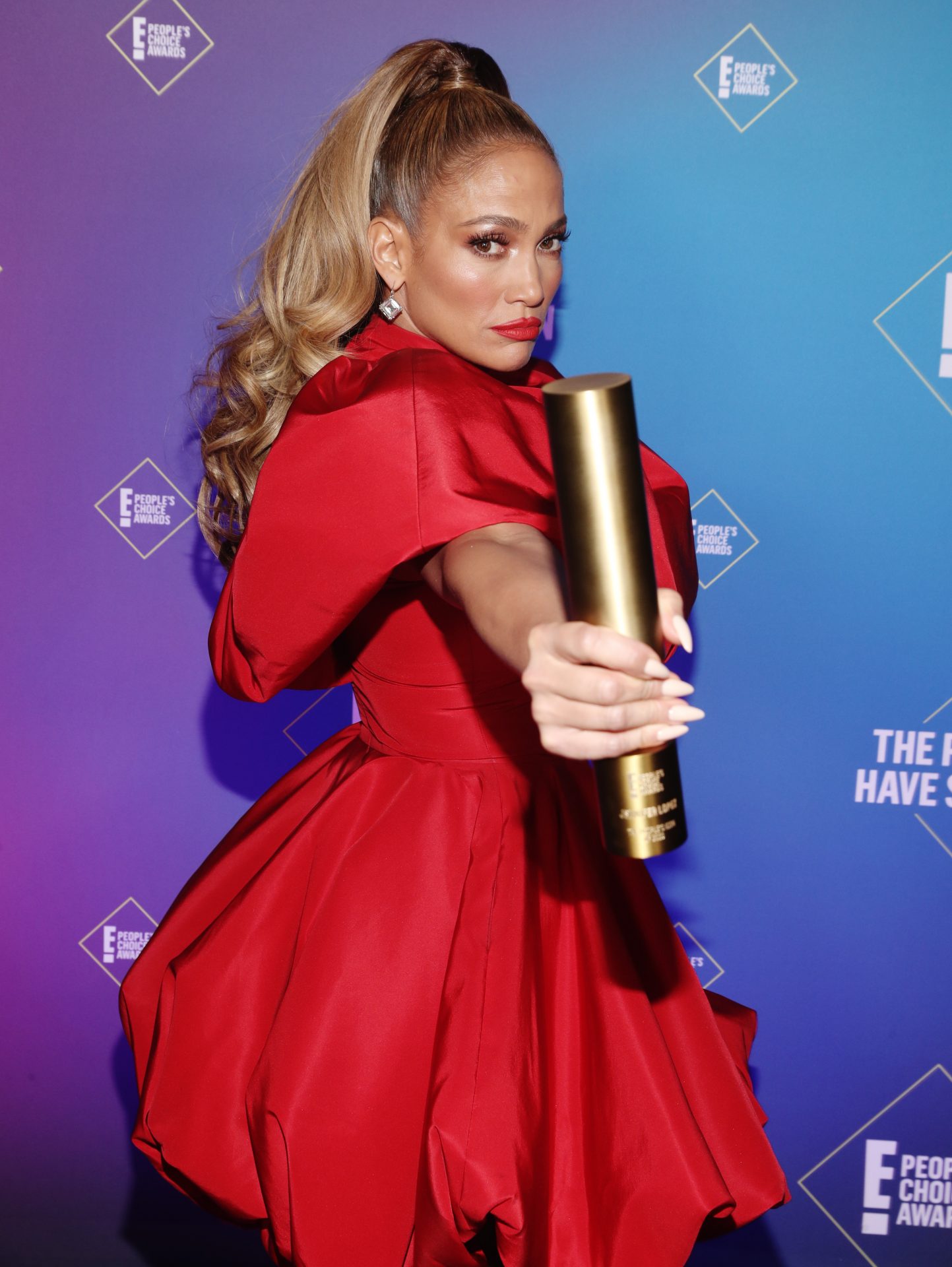 Finally, Lopez’s twins Emme and Max shared a sweet video message of love, before their mum swept emotionally onto the stage.

“Man, 2020 was no joke right?” she told viewers watching from home. “I mean before 2020 we were obsessing about winning this award or getting nominated for that award or we were caught up in who sold the most records or box office opening or crazy stuff like did we get the latest drop before anybody else.

“But not this year. This year was the great leveller.”

JLo continued: [This year] showed us what mattered, what didn’t. And for me, reinforced what mattered most: People, all of us, together. Helping each other, loving each other, being kind to each other. And the importance of that connection, that human touch. I realized that’s what I strive for in everything I do. To reach people, to touch people.

“I believe that’s what we all want, those shared experiences to know that we’re not in this alone.

“Your belief and your faith in me motivates me to keep going and sometimes when I’m tired or beaten down, like a lot of us have been this year, it’s my family, friends, my babies and my fans, you guys, who have lifted me up when I couldn’t lift myself. I am so grateful to have you, to have that in my life.”

Warming to her theme, JLo added: “You know I approach my career the same way I approach my life. I lead with life, I feel with my heart and I always try to speak truth in telling stories, singing songs. I do so with the purpose of bringing a little happiness, creating beauty and inspiring others to do the same.

“From being a little girl in the Bronx, New York, and having the privilege of performing on some of the biggest stages in the world, and even at the Super Bowl earlier this year, that was a biggie! I have seen and learned a lot and I am still learning. I want to thank you and tell you how much I appreciate you for letting me do that in front of you for all of these years.”

Because, as Lopez explained, not everyone wanted her to succeed.

“As a Latina and as a woman, we have to work twice as hard to get the opportunities,” said Lopez, “and sometimes my big dreams and my ambitions, it made the people around me nervous. ‘You can’t be an actress. You’re an actress, what you want to sing? You’re an artist, you won’t be taken seriously as a businesswoman.’

“The more that they said I couldn’t, the more I knew that I had to. So now here I stand so very grateful knowing that the true measure of my success is not in box office numbers or records sold, but from the love that I feel from all of you.”

Wiping tears from her eyes, JLo finished: “The true measure is inspiring girls in all ages and all colors, from all over the world, to know you can do whatever want, as many things as you want and to be proud of who you are no matter where you come from.

“I want them to know your dreams are limited only by your imagination, determination and their willingness to never give up. If I have touched you or them in any small way, then this is the greatest award I could ever receive.

“I accept this award with great humility and gratitude, and hope we can begin to heal as a country and stand together united and proud, and in harmony.”