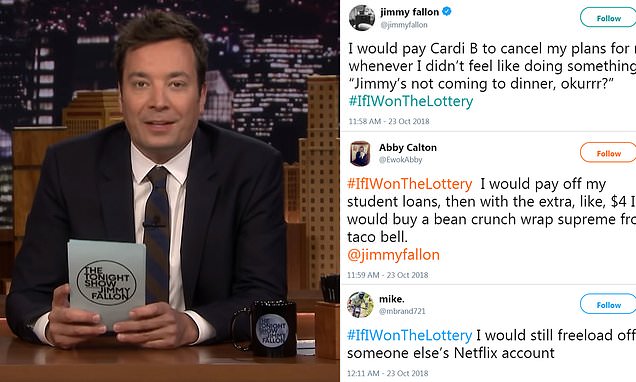 ‘I’d hire Morgan Freeman to narrate my life!’ Twitter users think up WILD ideas for how to spend the $1.6 billion lottery jackpot, after Jimmy Fallon said he’d hire Cardi B to ‘cancel plans for him’

Social media users are revealing the weird, wonderful – and downright wild – things they would do with $1.6 billion, after Jimmy Fallon revealed how he’d have spent the recent record-breaking Mega-Millions jackpot.

During The Tonight Show, the 44-year-old host asked his readers to tweet what they would do had they won the $1.6 billion jackpot that was reportedly won by someone in South Carolina on Tuesday.

Answers flooded in on Twitter with people dreaming up some fantastic and hilarious ways they would spend the money. 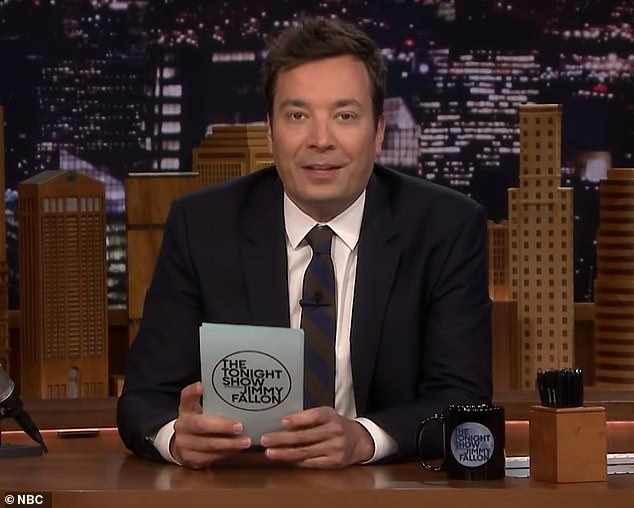 Curious: On The Tonight Show Starring Jimmy Fallon, the 44-year-old host asked his followers what they would do with the winnings if they won the lottery

Clever: Jimmy revealed he would pay Cardi B to cancel all of his plans

Brilliant: Another person had a similar thought and said the would hire actor Morgan Freeman to narrate their life

Funny: One fan of the Bachelorette said she would stage her own rose ceremony for her family and friends

Hilarious: Another person joked that a majority of the winnings would go towards their student loan debt

Jimmy first offered up what he would do with the money and wrote: ‘I would pay Cardi B to cancel my plans for me whenever I didn’t feel like doing something. “Jimmy’s not coming to dinner, okurrr?” #IfIWonTheLottery’

And he wasn’t the only one who wanted a prominent figure in Hollywood to provide narration for their own lives.

‘I would have Morgan Freeman follow me around, narrating my activities…”He chose a hooded sweatshirt today, passing on the polo for the 3rd straight day…”,’ one Twitter user hilariously wrote.

Another person said they would put their friends and family through a ceremony to decide who would also reap the benefits of the winnings.

‘I would hold a Bachelorette style rose ceremony for everyone I know where they’d find out whether or not they made the cut to be part of my new, rich life,’ the Twitter user wrote ahead of the lottery ticket announcement.

Thoughtful: One Twitter user said they would finally buy their own HBOGo subscription

Freeloader: But another person said they would rather save the money and still use someone else’s Netflix account

Priorities: A Chipotle fan said they would finally pay extra to get guacamole

One Twitter user’s main priority once winning the lottery would be to pay for any student loan debts.

She wrote: ‘I would pay off my student loans, then with the extra, like $4, I would buy a bean crunch wrap supreme from taco bell.’

Another focus of people’s tweets would be the streaming service subscriptions that they have yet to pay for themselves.

‘I would buy my own HBOGo and stop using the password of my college roommate,’ one person admitted.

The dream! One person would finally shop ‘Prices High to Low’ online

Important: Another person said the money would go towards paying off their parents

Incredible: One man said he would use the winnings to send Hogwarts letters to everyone

But someone else said they preferred to keep those few dollars in their account instead of paying a subscription fee. They wrote: ‘I would still freeload off of someone else’s Netflix account.’

Other clever suggestions for the lottery winnings included paying extra for guacamole at Chipotle, shopping with the selection ‘prices high to low’, and paying your parents to stop asking when they should expect grandchildren.

Unfortunately, there was only one winning ticket in the most recent drawing for the Mega Millions lottery.

Future chances might be slim, but there is still the possibility of winning millions during the next lottery drawing.