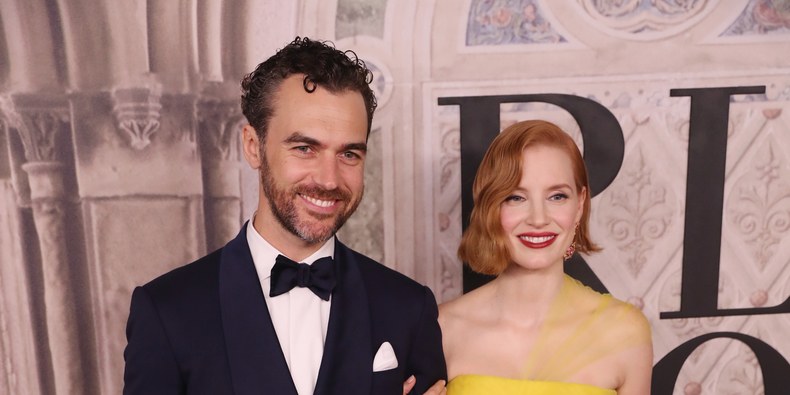 Earlier this week, actress Jessica Chastain and her husband, Gian Luca Passi de Preposulo, were spotted with an unexpected addition in tow: a baby carrier. In doing so, the couple seemingly confirmed reports that they welcomed their first child, via surrogate, earlier in the year.

According to Page Six, their baby is a girl, her name is Giulietta Passi Chastain, and she was born roughly four months ago. There have been a few hints, but Chastain and Passi de Preposulo have managed to keep the news impressively private. (There was no sign of the baby on her Instagram, for example.) Roughly a month ago, on October 12, according to the Daily Mail, the actress was seen pushing a baby stroller in Boston, where she’s filming the upcoming action-thriller Eve, in which she plays a black-ops assassin. A couple days later, Passi de Preposulo was seen carrying a car seat into a hotel. Then, last week, Giulietta accompanied the family to Paris, where Chastain attended the Galeries Lafayette Christmas-tree lighting. And this past week, their destination was reportedly an Upper East Side pediatrician (again, via Page Six).

So this season will mark their first Christmas as a family since the birth of their daughter. At the beginning of the year, during an appearance on Jimmy Kimmel Live, Chastain—a longtime vegan—described a recent Christmas gathering with her traditional Italian in-laws and her northern Californian family. Brunch can last up to four hours, she reported, during which her mother-in-law would scoop additional helpings onto her plate the moment she cleared it. “In the beginning, I would say I'm vegan. Which is like the worst thing. I don't eat 10 meals and I'm vegan. I would say, 'I'm sorry I can't eat that,'” Chastain said, to which her mother-in-law would reply, “No problem, we have fish.” Plus, there’s the language barrier: “It was a very quiet holiday, but there was a lot of pointing and a lot of food,” she said. It could make for an awkward situation—which prompted Kimmel to ask if she thinks her in-laws “hate” her. “Maybe that’s why it’s so quiet,” Chastain conceded, joking. “They just hate me.” Having a newborn in tow might change the tone of those family meals, in any case.

Chastain is going to appear on Jamie Oliver’s cooking show Friday Night Feast along with Danny DeVito, Jodie Whittaker, and Patrick Stewart—so perhaps motherhood will encourage her pivot towards a Jennifer Garner-style future in culinary fame. It’s only a short distance from guest-starring on a cooking show to hanging out with Martha Stewart and Ina Garten and bringing veganism to a small screen near you.