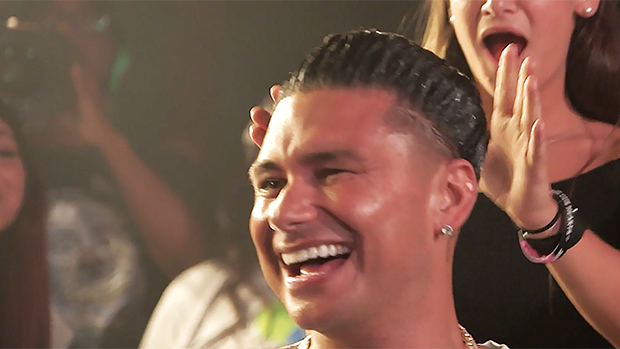 In this EXCLUSIVE preview of the ‘Jersey Shore: Family Vacation’ season 2 finale, one lucky fan gets to do what no one has done before — touch Pauly D’s blowout! It comes at quite a hefty price, though. Watch here!

The Jersey Shore cast hosts an auction for Be The Match on the Dec. 13 finale of Jersey Shore: Family Vacation, and at the event, attendees get a chance to bid on certain prizes that actually involve the famous cast members. HollywoodLife has an EXCLUSIVE sneak peek of the episode, in which Vinny Guadagnino introduces the first auction: A chance to tough Pauly “Pauly D” Delveccchio’s hair! From the very first episode of Jersey Shore, Pauly’s rock hard blowout has been a staple, and being able to touch it is QUITE a privilege.

“This NEVER happens,” Deena Cortese tells the packed crowd. The bidders come out in full force, and someone spends $400 just to touch Pauly’s head! “It doesn’t move!” the lucky winner declares, as she firmly places a hand on Pauly’s head. “Back in the day, when I created this hairstyle I never in a million years would think people would actually pay money to touch it,” Pauly admits. There are plenty of other auctions on the board onstage, but we’ll have to wait until the episode airs at 8:00 p.m. on MTV on Dec. 13 to see what they are!

Previously released sneak peeks from the finale show Ronnie Ortiz-Magro dealing with some new drama involving his on again/off again girlfriend and baby mama, Jen Harley. This time, she calls him to let him know their home in Las Vegas was ROBBED!

Earlier this year, season one of Jersey Shore: Family Vacation reunited the cast in Miami. Then, this summer, season two took them to Las Vegas and back to the Jersey Shore. Where will they head next?!