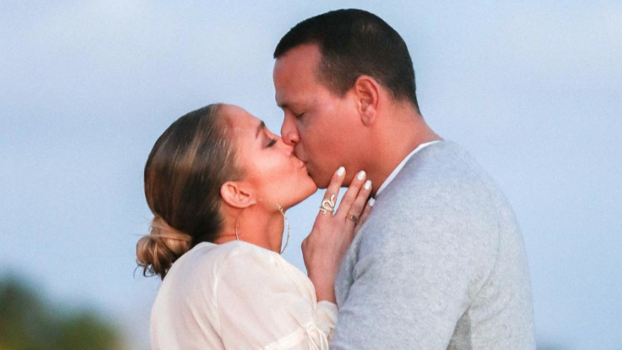 Jennfier Lopez and Alex Rodriguez, patron saints of all things shiny and expensive, are giving us devout J-Rod shippers the engagement content we’ve been craving since the news that he put a ring on it first broke on Saturday.

The initial announcement was simple and sweet — both Lopez and Rodriguez shared the same close-up photograph of their intertwined hands, J. Lo’s, of course, weighed down by a massive rock, estimated to be worth approximately $5 million.

On Tuesday afternoon, however, Lopez treated us to four — count ’em, FOUR — more shots of the whole affair, including A. Rod on bended knee in front of linen-clad J. Lo, whose skirts are billowing in the wind just so like the heroine in any romance novel. (We’ll spare poking fun of A-Rod’s beach sneakers. This time.)

Now, it looks like J-Rod used a bit of a heavy-hand when Photoshopping this image, because they really seem to have a glow about them, no? I mean, we don’t blame them — capturing back lit subjects at sunset is no easy feat. Then again, maybe that’s just what they look like all the time, IRL? Who’s to say.

The second and third images show the “she said yes” part that inspired the caption on A-Rod’s initial announcement, including the moment he slipped the ring on her finger. The final shot is of the couple sharing a sweet kiss that’s definitely worthy of the mantel in their new Malibu home.