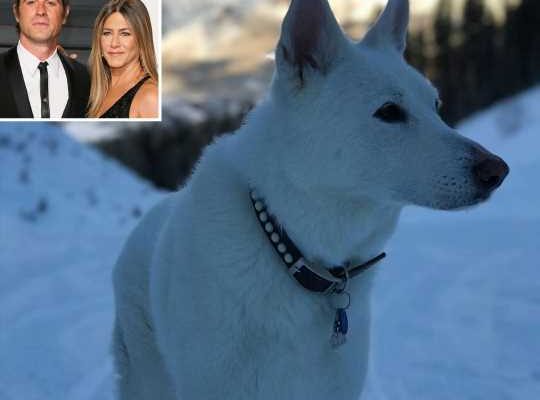 Justin Theroux and Jennifer Aniston‘s beloved German shepherd has died, the 47-year-old actor shared on Instagram late Sunday night alongside a gallery of photos from what appeared to be an outdoor burial ceremony.

Led with a snapshot of the white dog still alive, the slideshow then went on to give Theroux’s followers a look into the ceremony that saw Dolly’s body covered in flower petals as she was laid to rest.

In one image, two hands grasped each other’s — one presumably Theroux’s and the other appearing to be of Aniston, 50 — while in the last photograph, they wrapped the late pup in a soft blanket.

“Tonight, at sunset, after a heroic struggle … our most loyal family member and protector, Dolly A. laid down her sword and shield. 🐺💔,” Theroux captioned the post. “She was surrounded by her entire family.”

” ‘The one that never deserts, the one that never proves ungrateful … is the dog — faithful and true, even in death.’ -George Vest,” he went on, concluding with, “Rest In Peace Dolly” along with the hashtags, “#adoptdontshop” and “#rescuedog.”

Jennifer Aniston’s Been Too Busy to Date — But Is Open “If Something Comes Into Her Life”: Source

The Murder Mystery actress and The Girl on the Train actor announced their split last February after two and a half years of marriage and seven years as a couple.

During their 2015 wedding events, Dolly — whom Aniston had owned for nearly a decade at the time — and the former couple’s pit bull-boxer mix Sophie got spiffed up for the ceremony by Spa Dog.

Theroux and Aniston also opted to say “I do” at home — the hillside estate with terraced grounds that the Friends alum bought in 2012 — in part so they could include their dogs.

“They are like Jen’s babies,” a source told PEOPLE following the nuptials.

Many of Theroux’s fans and celebrity pals took to the comments section of his Sunday night post to give the actor their condolences over his loss of Dolly.

“I’m so sorry man.🌹,” wrote Cat Power. “Keep on the lookout, in the days after my little Abeulo passed, he was everywhere wanting me to see him, waking me up like he used to, following me in the bathroom, sitting on my feet like he used to💝be on the lookout for different things🌹so sorry🌹it is the hardest loss. 🙏”

Samantha Ronson also chimed in, leaving a series of broken heart emojis and one rainbow emoji.

The exes’ loss of Dolly comes a little over eight years after Aniston’s Welsh corgi-terrier mix, Norman, died at the age of 15.