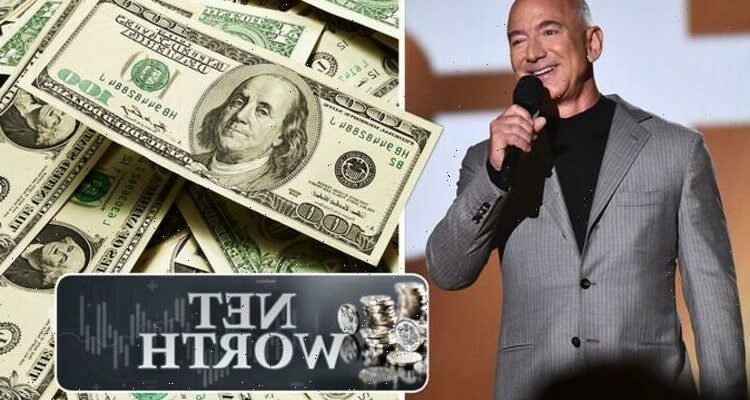 Blue Origin: Jeff Bezos and crew float around in capsule

Jeff Bezos is an American billionaire, raking in an incredible net worth as a result of his role in creating the online retail platform Amazon. His online business alone is worth an estimated $1.7 trillion (approximately £1,298,655,500,000) as of January 2022, according to Business Insider.

With so much money to his name, it’s no surprise the billionaire CEO earns an epic sum of money on a daily basis, but just how much is that exactly?

The amount comes from a series of calculations based on how much he earns according to his salary and his net worth.

Bezos, born in Albuquerque, New Mexico in 1964, began his career while still in high school when he developed the Dream Institute – a centre that promoted creative thinking in young students.

After graduating in 1986 with degrees in electrical engineering and computer science, he undertook a series of jobs before joining the New York investment bank D.E. Shaw & Co. in 1990.

Not long after, he was named Senior Vice President, becoming the youngest person in the company to hold such a title.

As web usage began to explode around the world, harbouring new, untapped potential, the entrepreneur was sparked with inspiration.

In 1994 he quit D.E. Shaw and relocated to Seattle, Washington, to open a virtual bookstore.

Though he began working out of his garage, his new business Amazon sold its first book in July 1995, beginning what was to become his journey to success.

The website didn’t take long to become a leader in e-commerce, open 24 hours a day for consumers to buy and review books.

In June 1998, the website expanded to selling CDs and then videos.

In 1999, the website added the option to host auctions, and he invested in other virtual stores.

By 2005, Amazon had diversified its offering to include electronics, hardware and apparel.

In 2007, the website launched its handheld reading device, Kindle, which saw customers able to purchase, download and read books on the go without ever having to hold a physical book in their hand.

Partly, this was thanks to the COVID-19 pandemic, which saw people unable to visit physical retailers or leave their homes other than for essential reasons.

Last year, Bezos stepped down from his role as CEO, however, he remains an executive chairman.

Bezos also has a number of links with outer space travel.

He founded a spaceflight company named Blue Origin in 2000, which owns a launch site in Texas.

He was named the richest person in the world in 2018, though has since lost out on this title to Tesla co-founder Elon Musk.