On tonight’s episode of ‘Dickinson’, Mrs. D crosses paths with a very familiar face for any diehard fan of ’30 Rock’ & Jane Krakowski talks with HL EXCLUSIVELY about the cameo!

This is my confession: I started watching Dickinson because I’m a HUGE Jane Krakowski fan. Now, to be clear, I stayed for the innovative writing, the incredible music, and the overall powerhouse cast I’ve grown to love, but it was Jane Krakowski that ferried me into the world Alena Smith created. And, if pressed on my favorite Jane Krakowski project, hands down I’d have to say it’s 30 Rock, the NBC Tina Fey-fever dream comedy I could quote on a dime. If we’re close friends, I’ll even hit you with my favorite line from Jane’s character, Jenna Maroney, “I’ll do it, but only for the attention.”

So, now that you understand what level I’m at, let’s dive into this week’s episode of Dickinson, “A little Madness in the Spring.” After the devastating events during Edward’s birthday party, the Dickinson women are at odds with Austin and Sue and it has them all pretty low. Edward’s big plan to cheer them up? A visit to the mental asylum! Don’t worry, no one is being committed, but it’s here that Mrs. D meets the most inspiring woman. 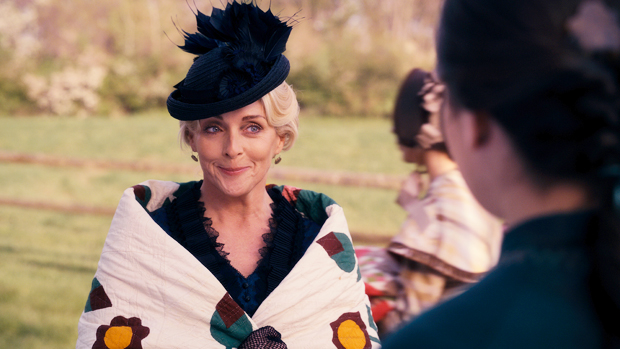 During a tour of the facility, which Edward is being considered for a trustee position, Mrs. D happens upon a nice looking room, with a woman curled up in blankets in bed. And BLAMMO, there she is: Marceline Hugot, better known as the actress who played Kathy Geiss, the daughter of GE CEO Don Geiss, over 30 Rock’s seven year run! Fans will instantly recognize her and be delighted, but no one was more thrilled than Jane.

“I couldn’t believe it!” Jane shared during an EXCLUSIVE interview with HollywoodLife about Dickinson season 3. “It was a great joy to get to do a scene with her again.” Marceline plays a patient at the asylum, who is in no way crazy – unless you count crazy smart! “Nowhere in the world is a woman treated as well as an insane asylum,” Marceline’s character tells Mrs. D, explaining that she’s getting some much needed “R&R” from all the cooking and cleaning she usually does for her family. All it takes is just a bit of yelling about voices coming from the wallpaper, and she’s being pampered like a queen! The reunion’s short, but very sweet. “That was really fun and wonderful to get to do a scene with her again,” Jane shared, “in a different setting entirely, of course.”

But season three was a bit of a “homecoming” for 30 Rock alum, as Jane puts it. Another of her pals from NYC actually got behind the camera in the sing-a-long episode the week before. Keith Powell, who played Toofer on 30 Rock, actually directed the musical-inspired episode, and as Jane puts it, it was a special moment for everyone.

“The filming of the family sing along was one of the great days of all three seasons of filming,” Jane shared, “because it really was like a family sing along. We all were assigned a song. We practiced on our own, we came onto set. It was the first time we presented it to everybody and we were allowed to react in real time. If we loved it, we could laugh, we could applaud, we danced along, all within the confines of our characters, and the believability of our characters. But it felt like it lived on a meta level as well, that we were all really celebrating and having fun together, like a party for all of us, as our characters and as our own people.”

And what a group of people Jane has worked with on Dickinson, especially the incredible fellow female talent that helps anchor the show. The fact that she’s in the presence of the next generation of superstars — Hailee Steinfeld, Ella Hunt, and Anna Baryshnikov — is not wasted on Jane at all.  On the contrary, to hear her speak about the women she’s worked alongside as a Dickinson woman takes what you see on screen to a whole new level. 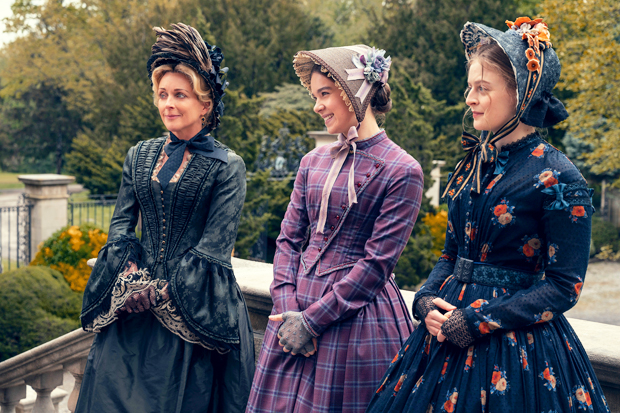 “I am so thankful for all my scenes with Hailee,” Jane shared, “because I feel like she’s an actress of such note that I learn something every time I work with Hailee. And she never ceases to amaze me in her professionalism. The greatest growth of my character in all three seasons have always come from the scenes with Hailee, and the emotional depth that they get to go to, and what is revealed about Mrs. Dickinson in those scenes.”

Jane added, “I absolutely adore working with Anna. I don’t know how anybody couldn’t adore working with Anna or watching Anna. She is just a delight. And I think she is a great comic actress, and I admired watching her blossom with all the comedy she was given as her character. And Ella is a force. She’s one of the people I work the least with, but I always felt there was such an honesty in her work.”

With the show being in its final episodes, it’s hard to say goodbye to such an impactful and creative series. Still, for Jane, the experience was so rewarding and she reveals she’s taken away a very important lesson.

“I think remembering to always try something new,” she shared. “I think the show is very different for me than the other projects I’ve worked on, and certainly the style of comedy. And I was very ignited by the original concept of the show, that it was going to have such a modern twist on the telling of the story of Emily Dickinson. And so, I think it’s exciting to take a chance, to take a risk, to try something new, and always be open to different artistic ventures.”