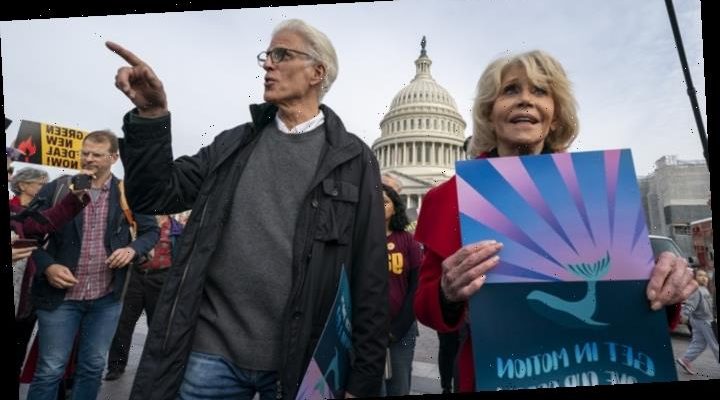 Jane Fonda was arrested (again) on Friday during an ongoing climate change protest in Washington D.C., and this time was joined by Ted Danson.

A video posted by Washington Post’s Hannah Jewell showed Danson being detained by police outside of the Capitol Building with his hands restrained on Friday morning. When asked if he has ever been arrested before, “The Good Place” star replied that he hasn’t.

The Twitter account for Fonda’s climate change campaign, Fire Drill Fridays, also tweeted a video of Fonda being arrested for the third time in three weeks.

Fonda started protesting three weeks ago to urge politicians to take action against climate change, and vowed to get arrested every Friday through the end of the year as part of the effort. Last week, her “Grace and Frankie” co-star Sam Waterston joined her and was also arrested.

Fonda said on her website for the campaign that she moved to D.C. “to be closer to the epicenter of the fight for our climate.” “I can no longer stand by and let our elected officials ignore — and even worse — empower — the industries that are destroying our planet for profit. We can not continue to stand for this,” she added.

Variety has reached out to Fonda and Danson’s reps and the Capitol Police for comment.