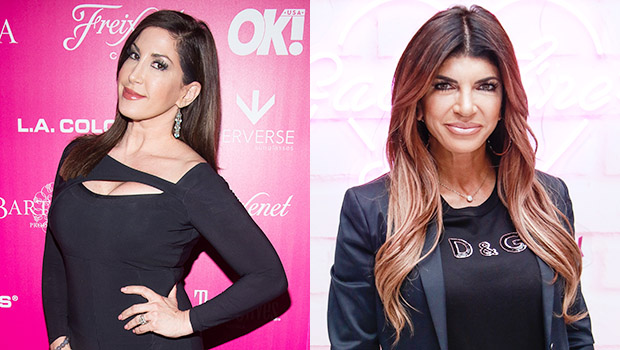 Jacqueline Laurita said Teresa Giudice should ‘call it for what it is’ if Teresa’s refusing to move to Italy because of her marriage with Joe Giudice, and not their kids, as he faces a deportation order.

Jacqueline Laurita, 48, is no longer close with her former confidante on The Real Housewives of New Jersey, Teresa Giudice, 46, and would be disappointed if Teresa had a similar fate with husband Joe Giudice, 48 — physically, that is. “I’m saddened to hear that after all that time apart, when they are almost through it all, that they will go their separate ways,” Jacqueline EXCLUSIVELY told HollywoodLife. As Joe faces a deportation order to his native Italy, his wife announced that she will “not doing a long distance relationship” on part three of the RHONJ reunion special, which aired on March 6.

“I would have thought they were all looking forward to that time to bringing their family back together as a whole and having a fresh start,” Jacqueline continued to tell HollywoodLife, with that “fresh start” being a new home across the pond. The Get It! co-author thinks Teresa’s four daughters Gia, 18, Gabriella, 15, Milania, 14, and Audriana, 10, would also appreciate the break from the reality television limelight, as their mom has been a main cast member on all nine seasons of RHONJ. “I just think having a more structured environment that’s less intrusive would be more beneficial for everyone. Most of her kids don’t even like filming, and I don’t feel her kids ever wanted their parents apart. I’ve heard it’s been hard for them,” said Jacqueline, who herself has appeared on Seasons 1-7 of the Bravo show. She has since refocused on her education, as she recently earned a certification in Dr. Kurt Woeller’s Autism Mastery Course, and is enrolled in his toxicity course.

During the reunion special, Teresa said her kids had not voiced any interest in following their dad to Italy. Her second eldest daughter was even against it! “Gabriella already voiced her opinion to me — she was like, ‘That would be so hard for me Mommy,’” Teresa told host Andy Cohen, as Gabriella doesn’t speak Italian. But Jacqueline thinks it’s possible the daughters could adapt to the culture shock, and even benefit from the change of scenery. “Even if, as minors, they don’t like the idea of moving, their family would finally be whole again and they would adjust to their new environment as a family unit. Sometimes change is good,” Jacqueline pointed out. But if Teresa’s marriage is the problem, her former best friend thinks the kids shouldn’t be used to justify the Bravo star’s decision to stay at home.

“On the other hand, If the REAL truth is that Teresa doesn’t really want to be married because she resents him, wants to keep her job/paycheck, and/or has a new boyfriend, then that is a very different story, I get it…but I don’t think she should use the kids as an excuse to stay behind. She should just call it for what it is,” Jacqueline said. After Teresa served an 11-month sentence for mail, wire and bankruptcy fraud charges (which Joe is still carrying out a 41-month sentence for), she admitted she was “angry” with her husband in the Feb. 27 episode of RHONJ. For now, the two remain married, as Joe is waiting to hear back on the appeal he filed over his deporation order. He was set to be released from prison on March 14, but his release date status has since been changed to “unknown” on his inmate record, as a source EXCLUSIVELY explained to us that “Joe’s remaining incarcerated until his appeal is satisfied.”