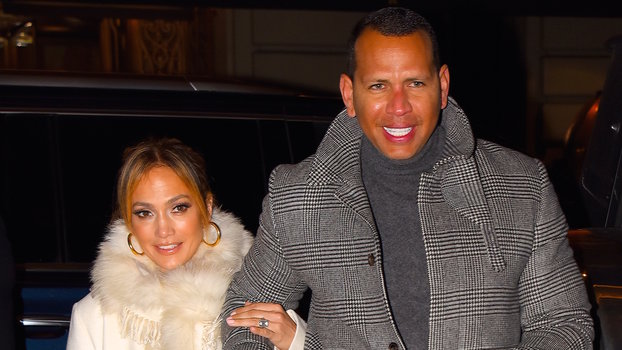 Jennifer Lopez and Alex Rodriguez recently touched down in NYC after a romantic trip to the Bahamas, where they got engaged. Their relationship milestone — fully documented on social media — practically broke the internet, thanks to the massive rock that sealed the deal.

On Sunday evening, J-Rod enjoyed a cozy night together at the Polo Bar, where they probably booked a table for three, because the songstress’s gigantic engagement ring basically third-wheeled the pair’s dinner date.

The couple stepped out together in causal chic attire. J.Lo wore a stark white coat with a matching fur scarf and ripped jeans. She accessorized with a snakeskin Birkin bag, gold hoops, and the aforementioned bling on her left finger — practically blinding photographers with its sparkle. Here’s a closer look:

Meanwhile, A-Rod linked arms with his lady while sporting a gray checkered coat over a charcoal turtleneck and trousers.

It’s estimated that J.Lo’s new ring is worth around $5 million, and, unsurprisingly, she’s a huge fan of the former baseball pro’s taste in jewelry. “Jennifer can’t stop looking at her ring. She is obsessed and loves it,” a source recently told People. “She keeps saying that the proposal was the best surprise ever.”

The insider recalled how the whole shebang went down. “They were going for a beach walk when Alex asked her to marry him. Jennifer loves that the proposal was so romantic and low-key,” the source continued. “She loves that Alex knows her so well and felt comfortable keeping it real instead of going for a flashy proposal. It was a dream proposal for Jennifer. She wouldn’t have wanted it any other way.” Swoon.