Aged care experts say boosting staff numbers is the key to reducing waiting times for in-home care for the elderly and improving services and employee satisfaction across the sector, but funding alone isn’t the answer.

“There are many ingredients to fixing the system but until you get the workforce right you’re not going to fix it completely,” Australian Nursing and Midwifery Federation federal secretary Annie Butler said. “It’s the cornerstone.” 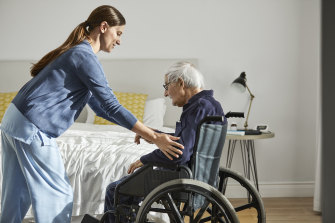 Boosting the aged care workforce is key to reforming the system, providers and workers say.Credit:Getty

More than 96,000 people were still on a waiting list for their approved home care package as of December, Senate estimates heard last month. It’s a slight drop from the almost 100,000 who were on a waitlist in September. In the past 2½ years, 27,278 Australians have died while waiting for their approved package.

One of the issues with reducing the waiting list is there are not enough staff to provide the care.

“The government has created a system that is completely inhumane, where workers are forced to make impossible, heartbreaking choices about how they spend their time because there are simply not enough of them,” she said.

“A strong aged care sector with a high-quality and skilled workforce will provide older Australians with the care they rightly deserve and give all Australians confidence that our elderly are cared for with kindness, respect and dignity,” he said.

As part of the $452 million in funding announced last month when the government released the Royal Commission into Aged Care Quality and Safety’s final report, $91.8 million will be used over the next two financial years to fund a new workforce support program. The program will include mentoring, support work placements and providing additional training for existing staff to help them support 13,000 new personal care workers.

But 13,000 new workers will not be enough. Australian Aged Care Collaboration spokeswoman Pat Sparrow said the workforce would need to triple by 2050 to cope with ballooning demand from the ageing baby boomer generation.

“There’s a lot of work we need to do to make sure it’s the place people want to come and work,” she said.

“Aged care providers do value their workforce, they would like to pay them more, but if we don’t have that fundamental reform and fix the chronic underfunding then they’re not really going to be able to do that.”

Economic modelling commissioned by the Health Services Union found a 0.65 per cent increase in the Medicare levy would cover funding for 59,000 additional jobs, quality training, a 25 per cent wage increase and an extra 90 minutes of direct care for residents each day.

However it was funded, HSU secretary Gerard Hayes said knowing where that funding was going was a crucial first step.

Beyond funding, the sector also needs to attract and retain staff. To do that, Ms Butler said current workloads had to be reduced.

“The No.1 issue is workload,” Ms Butler said. “It needs to be quickly followed by pay and conditions.”

“As a society, it is critical that we acknowledge and celebrate the honour that should come from a career looking after our elderly citizens,” he said.

“We are hopeful that with the conversation shifting from what has gone wrong to what needs to change, this will allow us to attract and retain more people into this vital sector.”