At the top of two twisting staircases in Suzi Quatro’s rambling old manor, there is a room full of memorabilia she calls ‘‘the ego room’’. ‘‘To get to the ego room is not easy,’’ she says. ‘‘There’s a big, heavy wooden door with a little sign I had made that says ‘Ego Room: Mind your Head’. You go in and there’s the red This is Your Life book, posters all over the walls, stage passes, pictures, scrapbooks, jumpsuits, guitars, CDs and videotapes. I will send people up there, they don’t come down again for like three days. I don’t know what it is. But the important thing is that when you come out, you shut the door.’’ 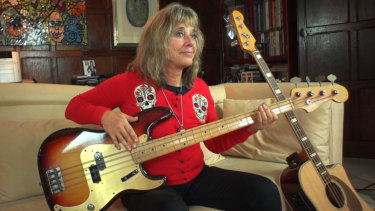 Suzi Quatro at home with her beloved bass: ”I wasn’t one of the first. I was the first.”

So it wasn’t ego, she says with heavy emphasis, that motivated her to agree when Australian filmmaker Liam Firmager approached her with his idea for a documentary about her life. She had been nursing the same idea for years – she had worked with another director on a similar project 10 years ago, ultimately without success – because she wants, as she puts it, ‘‘to set the record straight’’. To tell her story ‘‘because it hasn’t all been wonderful’’ and to establish her rightful place in rock’n’roll history. 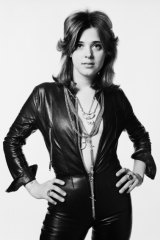 A typically leather-clad Suzi Quatro in 1973.

Quatro had a cluster of hits in 1973 and 1974, including Can the Can and Devil Gate Drive, trailing off through the '70s until she fell from the charts altogether at the end of the decade. By that time, however, she had a loyal audience, especially in Australia – she is currently on her 37th tour – and an image burned into the collective retina of a little leather-clad belter with a bass guitar, a lone woman in rock’s closed shop of men. ‘‘A lot of times I do interviews and they say ‘oh, you were one of the first’,’’ she says. ‘‘And I say ‘no, I wasn’t one of the first. I was the first’. That belongs to me.’’

We are sitting in her music-making room. She is 69 now, still pint-sized, wearing ripped jeans. The piano where she writes music is next to the window; the Fender bass her father bought her hangs on one side of the fireplace and the electric mandolin the music shop threw in ‘‘to sweeten the deal’’ hangs on the other. Quatro started playing bass when, at the age of 14, she joined two of her three sisters in an all-girl band called The Pleasure Seekers. She had learned piano for years and played percussion in her school orchestra. ‘‘But I didn’t speak up quick enough and Patti just said to me ‘bass’ and I said ‘OK’. So my dad gave me that and I had a lightbulb moment when I put it on. It just felt right.’’

The Pleasure Seekers had turned into Cradle, with a different assortment of sisters, when their brother and manager persuaded legendary British talent-spotter Mickey Most to come and see them. Most singled Suzi out and asked her to come to London. She was 19. Here was a chance to see the world beyond Detroit; more than that, a chance at stardom. ‘‘I was happy to go. Not to leave them, but I was happy to go on my path.’’ An old school friend later told her she had always been noticeably focused. ‘‘You know, you never see yourself as the person other people see. I saw myself as fun. But I guess I see it now. Because if I’m going over there’’ – she points to a spot across the room – ‘‘nobody is going to stand in my way.’’ 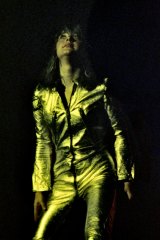 Suzi Quatro performing at Melbourne’s Festival Hall at the height of her fame.

Her ambition came at a cost. One of the items in the Ego Room is a cassette tape her family sent her when she was in London. It was recorded over their Thanksgiving dinner in 1971. She opened it on Christmas Day, alone in her hotel room. ‘‘I was all excited to hear the family I missed so much,’’ she says. ‘‘And the first thing I heard was my dad saying ‘well what do you guys think of Suzi being signed, huh? My God, she’s not that good’.’’ A snippet of the tape is included in the documentary; we hear her sisters chime in.

Tears come to her eyes at the memory. ‘‘Maybe he was trying to hurt me. I say he was angry: maybe he was. Maybe he just wanted me to hear what I’d left behind. I don’t know.’’ They visited her in London a few weeks later, but she didn’t ask them about it. ‘‘Why did I not ask? That’s not like me. Maybe I was afraid of the answer.’’ And she kept the tape. ‘‘Sure, I kept it. How could I not keep it? That’s a hole in your heart. Forever.’’

She remains close to her sisters, a push and pull of love and resentment that is obvious in the interviews they gave to Firmager for Suzi Q. It is now 50 years since she left Detroit. ‘‘Fifty years! And you could see that still coming off them in waves and me still being hurt. God, how long do you hold on to stuff? But it has exorcised me – now that I’ve seen that on the big screen, I now realise it’s not going to change. I’m going to have to change my attitude towards it. To the hurt. You get from the film that I’m a softie most of the time. I’m tough but I’m soft and I get hurt very easy but then again, I’m an artist. And artists do hurt easy. That’s part of the price.’’

Meanwhile, she remains in the British countryside. Amicably divorced from Len Tuckey, the guitarist with her old band and father to her two children, she married concert promoter Rainer Haas in 1993. He lives in Hamburg; she says they ‘‘go back and forth’’. The glam rock Suzi never hit paydirt in her home country; her Billboard moment came with Stumbling In, a country rock ballad she sang with Chris Norman in 1978. It would have been unthinkable a few years earlier, but so would a lot of her other gigs: three years on the sitcom Happy Days; playing a terrific Annie Oakley in the West End in the '80s; publishing poetry; several years as a DJ with BBC radio. She continues to make music; right now, she is collaborating on an album with KT Tunstall.

Next on the bucket list is a fictional movie based on her life; she wants to write it. Who will play her? ‘‘I don’t know. I’m torn between finding an unknown who has the vibe I had – there is a certain vibe I have and I always knew it, the vibe that you don’t fit anywhere – and a name. I’m complicated. It’s a complicated part to play. You know, I wouldn’t want to play me, if that makes sense.’’

Does she still feel like a girl from Detroit? ‘‘One zillion per cent. I love living here, I love the British people, but I’m an American in England.’’ A string of Stars and Stripes cushions decorate the couch; there are bits of Detroit memorabilia everywhere. At one point she thought about trying to buy back the family home where she spent her childhood. ‘‘It came up for sale and it looks exactly the same; I could picture my mother walking out of the kitchen. But then I realised how futile that was, because what I wanted was to go back into that world for five minutes. And you can’t.’’