Is YOUR town making you look old? Parts of the UK where residents are most at risk of skin ageing due to UV exposure have been revealed

It is well known that the sun is responsible for the vast majority of visible ageing, with UV rays accounting for 80 per cent of skin ageing, including wrinkles.

Now research by the Clarins Beauty Daily team has found the top 10 UK cities and towns where residents are most at risk of skin ageing due to UV exposure.

The findings are based on the number of sunshine hours per UK cities, with Chichester named the sunniest of all, with a total of 1,919 hours (80 days) on average a year, according to Met Office data.

Long-term UV exposure can also lead to pigmentation, reduced skin elasticity and a degradation of skin texture, including yellowing. 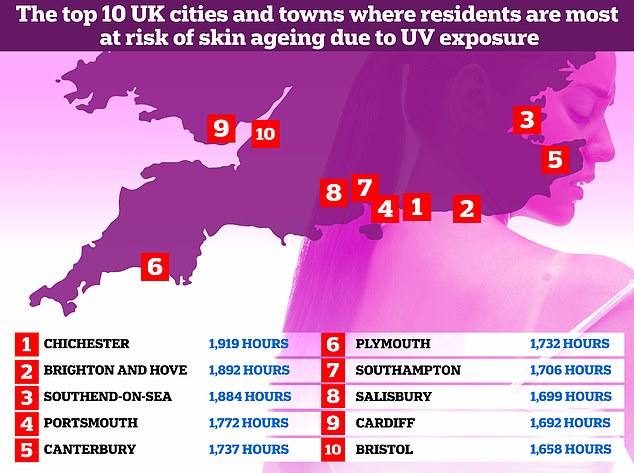 Residents in Derry, Northern Ireland, were the least at risk of sun damage, experiencing the lowest hours of sunlight per year among all UK cities at 1,222 hours (51 days).

Glasgow residents have little cause for concern, with a total of 1,234 hours of sunlight on average a year.

But Chichester, other coastal cities in the UK also had high annual average hours of sunshine.

Brighton and Hove came in second place with a total of 1,892 hours, Southend-on-Sea came in third place with 1,884 hours, and Portsmouth followed at 1,772 hours.

Residents in these places are even more at risk of skin damage than other cities in the UK, without proper skincare.

When looking at the 20 most-populated cities in the UK, Southampton was first among them, with a total of 1,706 hours of sunshine a year.

London ranked sixth for UV among the most-populated cities, with a total of 1,559 hours of sunshine, or 65 days a year.

With a total of 1,670 hours (70 days), the South East had the highest average hours of sunshine per year out of all regions in the UK, meaning that residents living here are at the highest risk of UV exposure day-to-day.

This is in comparison to  northern Scotland was the lowest with 1,104 hours per year or 46 days.

UV risk is usually at its highest between 10am and 4pm, as well as during the spring and summer months.

Although the sun is not as intense on overcast days, UV rays can penetrate through the clouds, so it’s essential to use SPF throughout the year.

There are two types of UV light that cause skin damage from the sun: 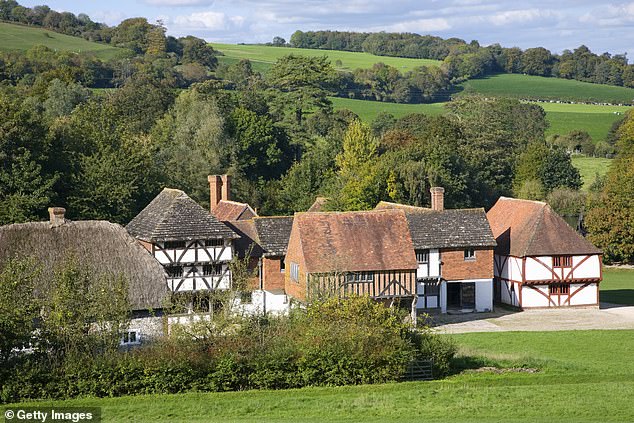 The findings are based on the number of sunshine hours per UK cities, with Chichester (pictured) named the sunniest of all, with a total of 1,919 hours (80 days) on average a year, according to Met Office data.

Dr Paul Banwell, founder and previous head of The Melanoma and Skin Cancer Unit (MASCU) in East Grinstead, one of the largest skin cancer units in the UK says: ‘Everyone should incorporate a high factor SPF into their daily skincare routine.

The first signs of ageing that are noticeable on the skin’s surface start around the age of 25.

This is accelerated if you’ve been exposed to sunlight, and it begins with fine lines and a loss of moisture and progresses over time. Skin ageing is sped up by exposure to the sun in the summer.

Dr Paul Banwell says: ‘The most important reason for protection and prevention of sun damage is to reduce the risk of skin cancer including pre-cancers called actinic keratosis, basal cell cancers and the potentially deadly melanoma.’

He says that wearing SPF is the only safe way to get a tan. NHS guidelines recommend that when buying a sunscreen you should always look for a SPF of at least 30 to protect against UVB, and at least 4-star UVA protection.

Aesthetic doctor, Dr Galyna Selezneva : ‘Not wearing sunscreen will leave the skin exposed to the sun’s UVA and UVB rays.

‘Ultraviolet radiation causes DNA changes to the skin that can lead to premature ageing.

‘Sun damage can destroy collagen and elastin in your skin too.

‘Collagen and elastin degradation in the deeper skin layers can result in premature signs of skin ageing, such as wrinkles and fine lines, because your skin loses its elasticity and firmness.

‘We need to be wearing an SPF of at least 50 on the face and once you’ve applied your broad-spectrum SPF you should reapply it every two hours.’

Overexposure to UV rays can lead to the development of wrinkles, texture, hyperpigmentation, broken capillaries, red blotches, brown spots and even lack of firmness in the skin.

In a 2017 Statista survey, 31% of men in the UK said they don’t wear sunscreen during the summer, even if they’re on a sunny holiday, compared to only 15% of women.

In addition, a 2021 survey revealed that 37% of the male respondents reported that they never apply sunscreen when outside of their home. 31% said they use it some of the time and only 11% said that they always use it.