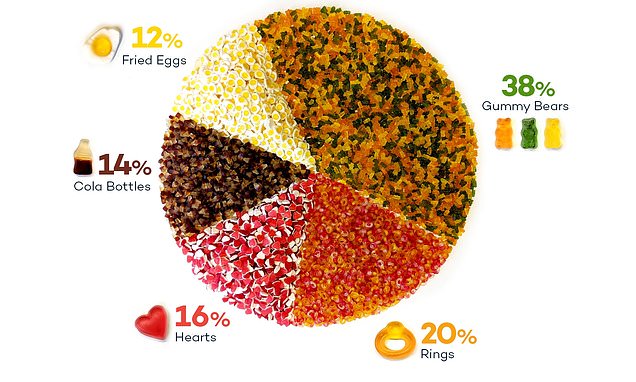 Is this PROOF that Haribo scrimp on love hearts? Researchers find there are THREE times more gummy bears than other varieties after sifting through 100 bags and 5,738 sweets

Everyone has their favourite Haribo, but it’s bad news if you like love hearts as a study has proven that the red-coloured jelly sweets are the least common variety.

A typical pack of jelly sweets contains a mix of love hearts, cola bottles, fried eggs, rings and gummy bears in a variety of colours and flavours.

Researchers at Magnet (magnet.co.uk) sifted through a staggering 100 packs of Starmix and counted 5,738 sweets to find out what the chances were of picking out your favourite variety, and how that might differ from pack to pack. 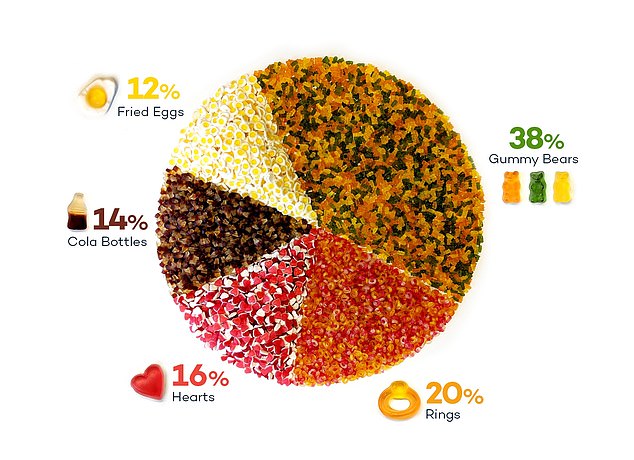 In a 190g bag, snackers have the highest chance of grabbing a gummy bear – as they make up 38 per cent of the bag.

That just leaves the foamy fried egg, which you have a one in eight (12 per cent) chance of picking out of a pack.

It appears that the quantities are strongly weighted in favour of the less popular gummy bears.

Using these calculations, they worked out what an average bag of 190g Haribo Starmix is made up of. 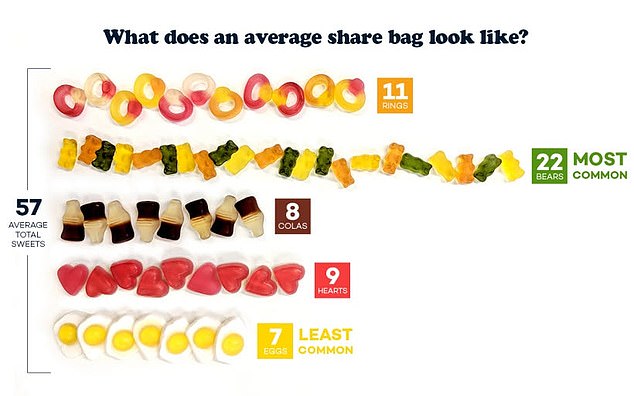 After sifting through 100 bags of Haribo Starmix and 5,738 sweets, researchers at Magnet worked out what an average bag of 190g Haribo Starmix is made up of (pictured)

The least common sweet which makes up an eighth of a bag is the foamy fried egg, with an average pack count of just seven.

However, if you’re sharing a pack with gummy bear fanatics then you’re in luck, as they’re the most common in a pack with a generous 22 bears to share or munch on.

They also quizzed 2,004 people around the UK which sweet they reach for, to find out what the regional favourites are.