I can distinctly remember the moment my school best friend revealed to me her trick to avoid making a single noise in the toilet, and proceeded to demonstrate – her inside a cubicle and myself dawdling outside – its efficacy.

You probably know the one. Carefully fold up some toilet paper, place it in the bowl, and ta-dah. Silence. I was suitably impressed. 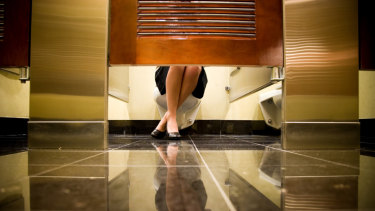 It’s a rare woman who does not have a tactic to avoid colleagues ever discovering they are, in fact, a human being with a digestive tract.Credit:iStock

This particular tactic, while environmentally questionable, is a favourite for dealing with the uncomfortable reality that metabolism doesn't magically suspend itself between nine and five. Like many of life’s secrets, it may be passed on in whispers from girl to girl, woman to woman.

Other methods include the stand-off, which involves lingering inside the stall if someone else is in the bathroom, to avoid them ever discovering you are, in fact, a human being with a digestive system. One woman recalls ruminating on this while locked in a lengthy stalemate with an anonymous coworker.

“[We] ended up waiting 20 minutes for each other to leave so we could get down to business. Neither of us did and by the time I’d waited that long I kind of had to see things through,” she says. “We both gave in and went and then, afterwards, I politely stayed in the cubicle so we could both avoid doing the wash of shame.”

Others rely on noise distractions, either by flushing the toilet themselves or by waiting for colleagues to flush or to run the tap. One friend says she switches the kettle on to help mask any sound, because the toilet is beside the kitchen.

Another worker says she goes so far as to concoct a plan to drive home when she thinks she needs to. She has only ever "gone" at her office twice. (Emergencies, of course.)

Others have their own designated "poop toilet", sometimes located on a different floor, or, more problematically, the disability toilet. Surely every woman has a strategy, so this might all seem perfectly normal.

Except it’s not entirely. Because research shows men’s anxieties around this are disproportionately lower than women’s.

University of Melbourne psychology professor Nick Haslam, author of Psychology in the Bathroom, says there are two primary reasons.

The first, he says, is there is a perceived greater social cost because society holds women to a higher standard when it comes to cleanliness, creating a “deep-seated, really weird” incompatibility in people’s minds between "femininity" and "number twos".

“Women are expected to be more deodorised, more hairless, free of all signs of being an animal, than men. And one area we see this most clearly is shame around bodily product,” Professor Haslam says.

“We talk a lot about sexual double standards, but I think this one is a whole lot stronger.” The second reason comes down to the large difference in “disgust sensitivity” between men and women, he says.

“Women on average tend to report disgust to a wider range of experiences and are more bothered by the same experiences. That motivates people to hide evidence from themselves and others of disgusting things.

“It’s all a matter of hiding what’s shameful and women are often socialised to have more body shame.”

Public toilets can breed embarrassment (but) the workplace bathroom amplifies this because it involves people you face every day.

One 2005 study, titled Fecal Matters, concluded women were more likely than men to believe others would find them disgusting and that a relationship would be impacted if someone overheard them in the bathroom. In contrast, men were twice as likely to find faecal noises funny.

Professor Haslam says while all public toilets can breed embarrassment, the workplace bathroom amplifies this because it involves people you face every day in a professional environment.

There are products, too, playing to women’s insecurities. From colourful handbag-friendly toilet bowl sprays to a Japanese invention that makes flushing sounds to camouflage other unseemly noises.

University of Melbourne social researcher Dr Lauren Rosewarne says these products are marketed to women because of insecurities stemming from cultural forces.

“[These products] are absolutely about reminding us of the supposed grossness of our bodies and to make us feel like we need to make purchases to remedy this," she says. “Women are supposed to be all sugar and spice.”

Professor Haslam says women’s anxiety could consequently be “out of proportion” for what is an essential bodily function.

“It’s not one of the great issues of our time but I think it causes a certain amount of angst and it’s ultimately based on a fairly silly thought process. Hygiene is important, there’s a reason we are averse to this stuff. Infectious disease is a bad thing. But we worry about this too much.

“Is it really going to destroy your career if someone knows you’re going to the bathroom?”

Professor Haslam says simply telling people not to worry isn’t going to help because negative judgments are inevitable. Instead he thinks we need to be kinder and more tolerant.

He also believes changing how we speak to young girls could help ease bathroom shame. He suggests speaking more freely and matter-of-factly about poo, similar to how we talk increasingly openly about sex with children, to normalise it and remove excessive shame.

“This is not a topic that can’t be talked about,” he says.