He was pretending to be a Travis Scott Hypebeast for a video — and was attacked by a Lesser Spotted Karen defending its territory.

He was purposely trying to be annoying — and it worked.

YouTuber Baylen Levine encountered a real life Karen in the wild this week, when he recorded a video pretending to be a “hypebeast” in McDonald’s.

As part of his skit, the vlogger concocted a hilariously hideous outfit of the most collectible items hoardable, including a Supreme headband and gloves, a pair of Yeezy trainers, and a Travis Scott hoodie, before going into McDonald’s to beg for the new Cactus Jack collaboration from the menu.

“I got here as quick as I could, Cactus Jack sent me,” he tells the fast food staffer who never asked, while his buddies secretly film.

When he’s told he needs to wear a mask to enter, he asks for a spare: “Do you have any Supreme ones? I only wear Supreme.”

“I’m so excited,” he says of the lit limited edition menu item (literally a Quarter Pounder with cheese, medium fries with BBQ sauce and a Sprite — because that’s what Travis Scott orders). “I’m getting goosebumps just thinking about it.”

But one customer in particular does not find his antics funny. At all.

She tells the manager they are recording without people’s permission, and within seconds has called the police.

“You guys are f–king idiots!” she yells, threatening to knock the phone out of his hand. “F–king nerd.”

A male companion is then summoned into the restaurant, who orders them outside, presumably to fight.

“You wanna go for it?” the older man threatens once outdoors, before they inform him he’s trying to fight a 19-year-old kid.

“Go get a job and do something productive with your life!” Karen screams while collecting their pictures (without their permission, incidentally) for the police.

“Look at you, classy! You look like a f–king dweeb in here talking about a Travis Scott burger,” she spits, threatening to press charges as soon as he posts the video online. “I hope your parents are rich.”

The final insult comes when, having just been told to do something productive with his life, a group of young fans rush over to Levine to ask for a photo with him — right in front of the bewildered couple — and he asks Karen: “Hey, do you mind taking a picture of us?”

As one commenter on Reddit summarized the whole encounter: “When an overwhelmingly annoying force meets an immovably irrational object…”

Got a story or a tip for us? Email TooFab editors at [email protected]. 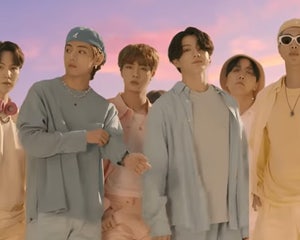 Top 10 YouTube Videos With The Most Views in 24 Hours