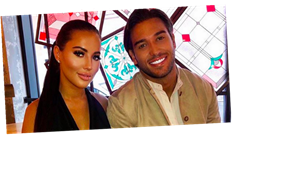 TOWIE couple Yazmin Oukhellou and James Lock have called time on their turbulent relationship after four years together.

Their relationship was rarely smooth sailing, and the couple were hit with break-ups, huge arguments and cheating rumours.

Let’s take a look back at their rocky romance…

The pair had known each other for a while as James is good friends with her brother, Ex On The Beach star, Adam Oukhellou.

On an episode of TOWIE aired in April 2018, a medium predicted they would be married and have children very soon.

The psychic told the couple: “I feel there are preparations on rings, I don’t see an engagement ring, but it’s a preparation for going right so let’s get married, let’s move on.

"And I don’t feel that the baby’s coming after the wedding, it’ll probably come before. The future’s there, and there’s a baby there. It will be a little boy.”

James and Yazmin were clearly shocked by the unexpected baby news, with James adding that he was “converted” after the psychic’s visit.

However, the couple split in 2019 after Yazmin claimed that James had cheated on her while on holiday in Turkey.

Their whole exchange was captured on TOWIE, with Yaz accusing James of lying to her while they were on holiday.

She said on TOWIE at the time: “To cut a long story short it was 4 am, and he wasn't with me in bed. He was in a room with two boys he met around the pool and three girls.”

James later denied this, telling Georgia Kousoulou: “I didn't cheat. What happened is I've just gone out, and I've put myself into situations that I shouldn't have been in.”

Following the breakup, James appeared on Celebs Go Dating and ahead of the show said he was no longer in love with Yazmin.

“I’m not a bad guy, but sometimes people just don’t work. People fall out of love, I’ve got love for my exes, but I’m not in love with them. It’s just one of them things, but I’ve always been respectful, I’ve always been a gentleman, and that’s the main thing. I have no animosity towards anyone I’ve ever been with,” he said.

Despite this, they rekindled their romance a year later, but Yasmin still admitted that she “couldn’t trust James 100%”.

“I feel like I will never trust anyone fully 100 per cent and I don't think you ever should,” she said at the time.

TOWIE stars: Past and present

Last year, they flew to Dubai where it is reported that they have been “bickering” non-stop which culminated in a huge row and the end of their relationship.

“It got pretty nasty, and Yaz wants to leave Dubai as soon as she can, but she’s having trouble getting a flight,” an insider source explained.

Suspicions of a split grew when James unfollowed Yazmin on social media, and she posted a cryptic tweet that fans read to be about her reality star boyfriend.

“Let go of expecting people to be a certain way just because you are. You are a deep soul with a big heart. Not everyone will understand or respect that.

“Detach yourself from wanting to be understood & flow in your self-love. Who and what will be in your life will reveal itself,” it read.

Since then, they have both admitted that it is time for them to go their separate ways for good.