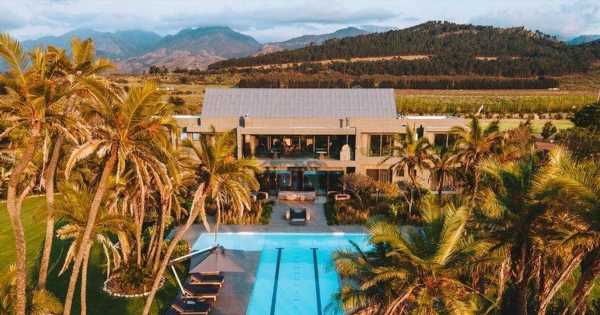 Winter Love Island has officially been confirmed and will be back on our screens in 2023.

And despite most of the islanders not being born in the nineties, the new series of the ITV show will have a nostalgic feel with Gladiator-style challenges in new pictures of the South African villa.

Contestants will even be able to train with access to their own running track and an Olympic-sized pool, at the stunning mansion.

Series producers have been so keen to have more challenges that they spent an estimated £1.2 million hiring the luxurious mansion for the winter series.

Islanders will have to fight for love at the palatial property, which is named Ludus Magnus after the Ancient Roman gladiator school.

The sprawling 25-acre estate also boasts football and rugby pitches for islanders to train on, as they get hot and heavy in the new series.

If islanders are still feeling adventurous, they can also explore the beautiful surroundings of the villa with its multiple mountain bike trails, river rapids and zip line.

As they recoup for the latest challenge, contestants can unwind in the villa’s treehouse which has its own balcony overlooking the valley near Cape Town.

The residence also has its own private “island” with a romantic sandy beach sheltered by palm trees, perfect for romantic date nights.

However, fans of Casa Amor will also be delighted as the rival villa will be just moments away from the main house.

A source told The Sun: “Casa Amor’s inhabitants have always been able to relax in the knowledge that the people they’re coupled up with are miles away.

“Well, not any more — if there’s any wild partying going on, the main villa may well be able to hear it.”

It will be an even greater test of loyalty for the islanders, as the new series begins in January with new host Maya Jama.

However, there will be more islanders than ever before with the South African villa boasting 17 bedrooms, all of which has been refurbished over the last two years.

Owners Regis and Ilaria Maniora have invested an incredible amount of time into their dream home, which is eco-friendly and has resident rescue donkeys.

The husband and wife are high-level triathletes, who originally set out to have the estate as their own training ground before ITV producers contacted the couple.

ITV executives were so keen to secure Ludus Magnus that they reportedly paid £8,000 per day to rent the entire estate, before also hiring teams of gardeners and builders to ensure the property is camera ready for the new series.

Despite this, a source said that ITV bosses were thrilled with the property.

They said: “There’s bound to be plenty of fun and games on the winter edition and Ludus Magnus provides the perfect opportunity for a huge range of activities for the contestants to get stuck into.”