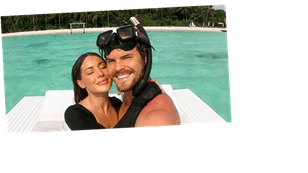 Louise Thompson and fiancé Ryan Libbey have shared a peek inside their insane holiday to the Maldives.

The former Made In Chelsea star and her hunky other half jetted off to the tropical climate to escape the looming UK lockdown for the romantic hotspot.

They shared a look at their hut style accommodation which was surrounded by crystal clear turquoise water, and had their own private infinity pool, terrace, and steps that they could climb to take a dip in the ocean.

A bikini-clad Louise posted a snap of her posing on a hammock over the water writing in the caption: “Nothing short of a miracle. Feeling blessed, Ryan has been squirrelling away planning this trip for TIMEEE @ayadamaldivesresort … and by a stroke of luck we made it.”

Louise has been documenting their stay in the stunning location including their brush with a shark, so let’s take a look!

Get exclusive celebrity stories and fabulous photoshoots straight to your inbox with OK’s daily newsletter. You can sign up at the top of the page.

Louise Thompson and Ryan Libbey jetted off to the stunning Maldives, where they got stuck into exploring their surroundings.

Louise and Ryan’s luxury hut on was built right in the middle of the crystal clear waters, with a hammock for them to relax in while taking in the views.

However the couple had to make a quick exit after they had a brush with a shark while they were snorkelling. Louise shared on her Instagram Stories: "Oh my god! Ryan and I just saw a shark, a big one! Not even kidding. It was a massive one, a black tip shark. Not dangerous but we both started swimming back like octopus!"

Louise and Ryan spent most of their day snorkelling and trying to spot exotic fish while also dodging sharks.

Despite their brush with danger, the couple also snorkelled to a pontoon in the middle of the ocean where Louise said was a great spot for a nap. She shared a picture of the pair in the swimwear and wrote: "The most EXTRA place for a snooze. We snorkelled out to the pontoon for a lil chill and some backflip practise … it’s further than it looks. Thankfully no [sharks] sighted en route."

Ryan opted to try out a spot of scuba diving as well, and Louise wrote in the caption about how she was feeling: "Bricking it."

Louise showed off her washboard abs as she posed in a mismatched bikini in between breaks from swimming.

Louise thirsted after her fiancé Ryan as he took a shower in the outside area of their sea hut.

Louise shared an incredible picture of the view from their infinity pool looking out across the water to some impressive cloud formations.

The former Made In Chelsea star shared a brief peek from inside their room as she woke up to the stunning views.

The couple had their own deck to eat their meals from while looking out across the water, as well as sun loungers and their own private pool and jetty.