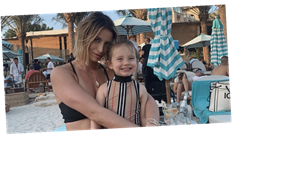 Ferne McCann has jetted off for some winter sun with her adorable daughter Sunday, aged three, and it seems the pair are having wonderful time.

Taking to her Instagram stories, the former TOWIE star showed off the enviable trip to Dubai to her 2.6 million followers as she posed with her tot.

Dressed for the beach, Ferne, 30, who recently said her dating standards have slipped, looked as glamorous as ever as she lounged with her little one.

“Lots of fun & giggles & food & laughter & good times with my darlings,” penned the star as she posed for images on the beach with friends.

Ferne also showed off her toned physique while posing poolside in a pink and blue pattered bikini with palm trees and blue sky as her backdrop.

“My goal is to fall in love with everything that I am,” the reality star penned, and the post garnered over 22,000 likes from fans.

As well, Ferne has been wining and dining during her stay in Dubai and posted a snap in a restaurant looking sun-kissed, with a steak in front of her and a drink in hand.

And it seems First Time Mum star Ferne has also had the chance to spend lots of quality time with her adorable daughter.

Celebs such as Holly Willoughby and Ferne McCann are loving leopard print – get the looks here from £9.99

Enjoying some downtime with her mini-me, the star lapped up the sun with the little one, snapping a photo of her playing in the pool and coming down the waterslide.

They then headed into the desert for what looked like an incredible outing, riding in the back of a car across the sand.

Ferne looked sensational in a yellow top with a long ponytail and dewy makeup look, and when the mum and daughter duo weren’t posing for the camera they enjoyed a camel ride.

The antics were topped off with a visit to the hotel bar for some delicious looking food and cocktails.

The 30 year old’s sun-filled trip comes after her mystery beau was revealed to be a ‘multimillionaire businessman.’

In episodes that were aired on Ferne’s show, her secret beau treated her to lavish gifts and even hired a private jet for her and her pals to travel to France for her birthday weekend.

And now the man in question has been unveiled as businessman Charlie Wilson, according to reports by The Sun.

The gentleman, who the reality star affectionately called 'Mr C', is a 29 year old property developer who was featured on the Sunday Times Under 30s Rich List.