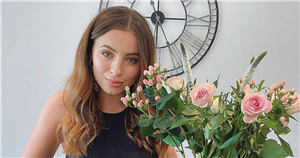 Charlotte Jordan has won over Corrie fans since she joined the cast last November as Daisy Midgeley, the step-daughter of Jenny Connor.

So far, the young actress, who’s known for stirring up trouble, has become a firm favourite for viewers and has already been involved in some major storylines despite only being in the role 10 months.

But when she’s away from the cobbles, the 25-year-old from Cobham in Surrey can be found hanging out at her home with her pet pooch.

And it's the perfect place to unwind from her gripping storylines, with a huge kitchen, beautiful bedroom and stunning features.

Let’s take a peek inside…

There’s no denying Charlotte has great taste when it comes to interiors and likes to keep things classy but stylish.

Sharing a snap of her large kitchen in her pj’s, which has a blue and gold theme running through it, boasts a white marble open surface, a big white dining table, which is accompanied by blue velvet chairs and a full length mirror.

The actress has accessorised it perfectly too, with a vase of colourful flowers, gold coasters and a bunch of pampas grass.

Charlotte, who said she was thrilled to be joining an iconic show like Corrie, has also given us a glance into her beautiful bedroom.

Wearing a pair of comfy trousers and a top with freshly done makeup, the soap star shows off her huge comfy bed covered in plenty of pillows and a brown faux fur throw; a grey table lamp and two sets of mirrored side draws which sit either side of the bed.

On top of one of the draws is, of course, Charlotte's favourite thing, a bunch of blooms, this time white and red roses, as well as a candle and a Jo Malone cologne.

She has plenty of space to store her fabulous outfits too, as another picture where Charlotte wears an oversized rollneck jumper with a red lip, reveals a wall of white glossy built in wardrobes.

In keeping with the stars classy style is an incredible glass chandelier light hanging from the ceiling.

Her lovely living room also boasts a gorgeous fireplace and a grey armchair, which Charlotte has styled with a royal blue velvet cushion (a colour the actress seems to love) and mustard coloured throw.

There's also a big white rug, a marble side table, a big comfy grey sofa and plenty of pictures on the walls.

Later this year Charlotte’s boyfriend will be acting alongside her in Corrie, as he was roped into being a stunt double during Covid restrictions for an intimate scene where Daisy will try to make a move on Ryan Connor.

Speaking to The Sun she said: “They roped my boyfriend in because we're shooting socially distanced.

"And so my boyfriend got the long-awaited call he was hoping for for his entire life – Coronation Street wanted him to come to work as Ryan's thigh double.

For more lifestyle updates from OK! sign up to our daily newsletter