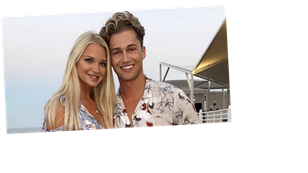 After suffering the ordeal of the I’m a Celebrity castle, AJ Pritchard deserves a treat.

And his girlfriend Abbie Quinnen certainly pulled out all the stops throwing him an incredible welcome home party.

AJ was greeted with his own red carpet and an I’m a Celeb themed balloon castle, complete with Bushtucker Trial inspired creepy crawlies.

"I'm so excited to see him, my heart is racing," Abbie gushed.

After days of just rice and beans, AJ was thrilled to be greeted with a spread of his favourite treats including Lindt chocolate and Oreo cookies.

Posting a video of the celebration to his own Instagram, AJ thanked his ‘best girlfriend ever’, saying: “She got me my own castle!”

AJ, 25, started dating fellow dancer Abbie, 23, after meeting on his Get On The Floor live tour.

During the show, Abbey ran AJ’s official Twitter account, tweeting her take on her boyfriend’s antics in the castle.

She complimented her boyfriend on being the "most genuine and down-to-earth" contestant on the show along with athlete, Mo Farrah who was voted off the show at the same time.

Abbie has admitted in the past that she struggled to adjust to AJ’s fame at first and found his last series of Strictly in 2019 a real challenge due to speculation over his friendship with dance partner and YouTuber Saffron Barker.

But now Abbie and AJ are stronger than ever having spent the first lockdown in isolation together.

The couple are now looking ahead to the future, hinting it won’t be long before they walk down the aisle.

AJ said: “We’re like that couple who see a movie or something about weddings on Instagram, then talk about whether we’d want it at ours.”