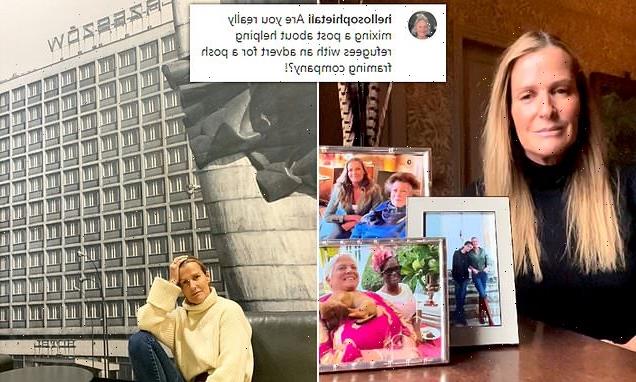 British socialite India Hicks has been criticised for using a post about helping Ukrainian refugees in Poland to also plug a ‘posh framing company’ she’s previously been paid to collaborate with.

Prince Charles’ goddaughter, 54, who lives on Harbour Island in the Bahamas with her husband David Flint Wood and their five children, told her 325,000 followers last night that she had travelled to the Eastern European country to help Ukrainians displaced by Russian attacks on the country.

However, in the same post, Hicks also mentioned a photo frame ‘edit’ she created for upmarket UK homeware company Addison Ross to mark International Women’s Day last week – saying there was only one day left to buy one and pushing followers to the ‘link in my bio’.

The post was branded ‘awkward’ by one person, while another responded: ‘Are you really mixing a post about helping refugees with an advert for a posh framing company?!’ 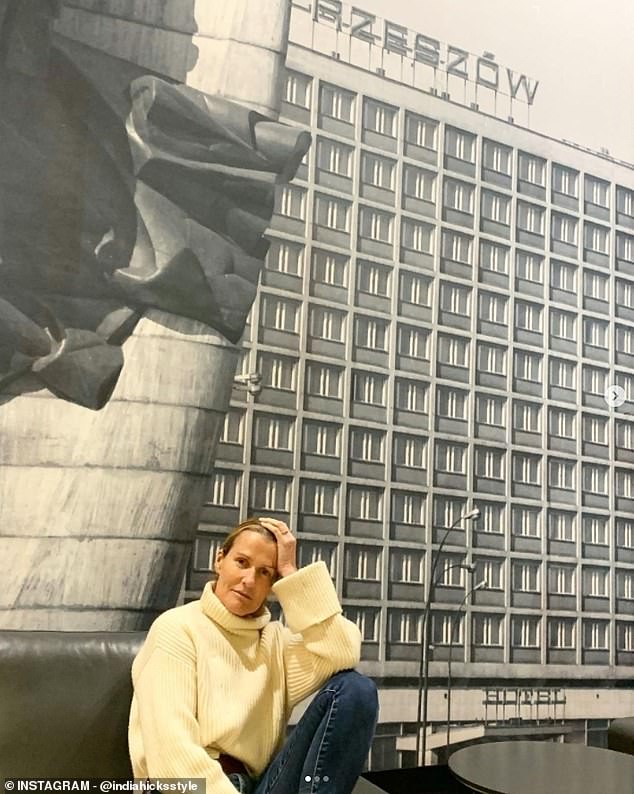 India Hicks, the 54-year-old socialite who is Prince Charles goddaughter, told her Instagram followers yesterday that she’s travelled to Poland to work with a global disaster response charity in helping refugees – but she faced criticism for also featuring a homeware company she’s been paid by in the past for promoting a sale of photo frames 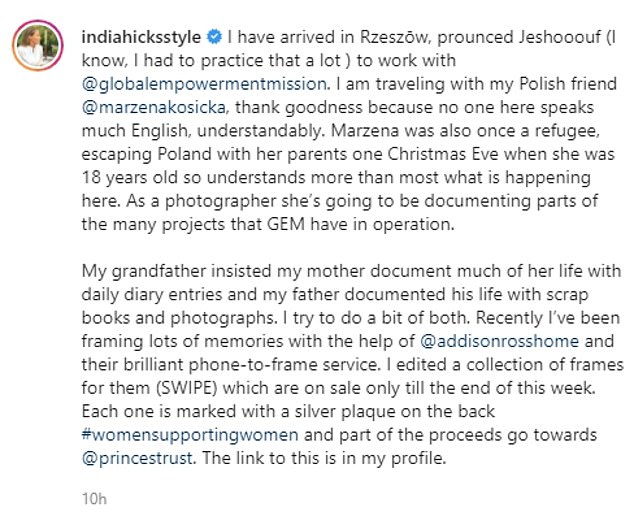 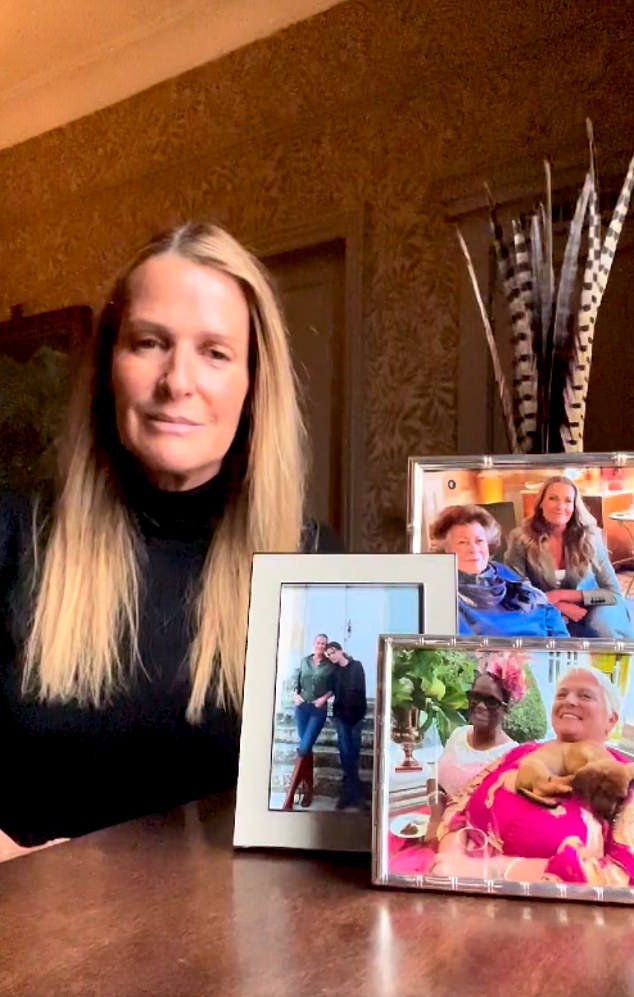 A previous post promoting the photo frames from Northumberland based homeware company Addison Ross. The socialite has collaborated with the company on several occasions as part of a paid partnership 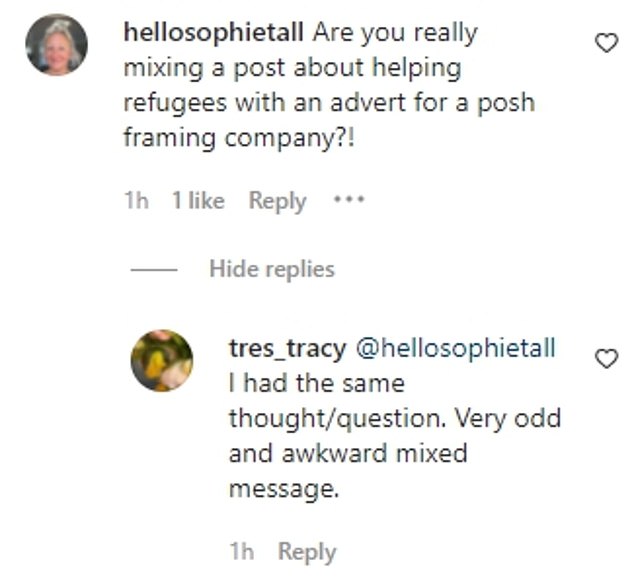 10 per cent of sales from Hicks’ four-piece frame collection, where prices range from £28 to £45, are donated to the The Prince’s Trust.

A spokesperson for Addison Ross confirmed to MailOnline that Hicks has been paid as an influencer for previous posts – using the hashtag #ad for transparency – but said the company had no knowledge of yesterday’s post.

Hicks revealed she had arrived in Rzeszów, a small city in southeast Poland – 65km from the Ukraine border – to begin charity work with Global Empowerment Mission, a global disaster response charity founded by US businessman Michael Capponi.

Offering glimpses into her first few hours in the city, Hicks, who served as bridesmaid at the wedding of Prince Charles and Princess Diana, shared a photo of herself outside a hotel in the city, and getting to grips with the local currency.

She wrote: ‘I have arrived in Rzeszōw, prounced Jeshooouf (I know, I had to practice that a lot ) to work with @globalempowermentmission.

‘I am traveling with my Polish friend @marzenakosicka, thank goodness because no one here speaks much English, understandably.’ 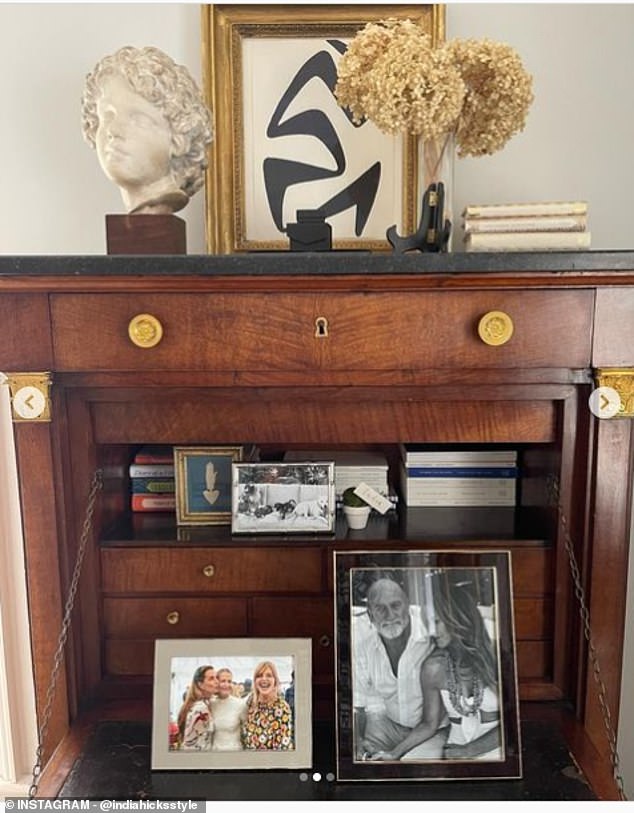 Also featured in the post about Hicks’ arrival in Poland this week were two photos in frames by Addison Ross including one featuring Hicks with her husband husband David Flint Wood, who she wed after 26 years in September 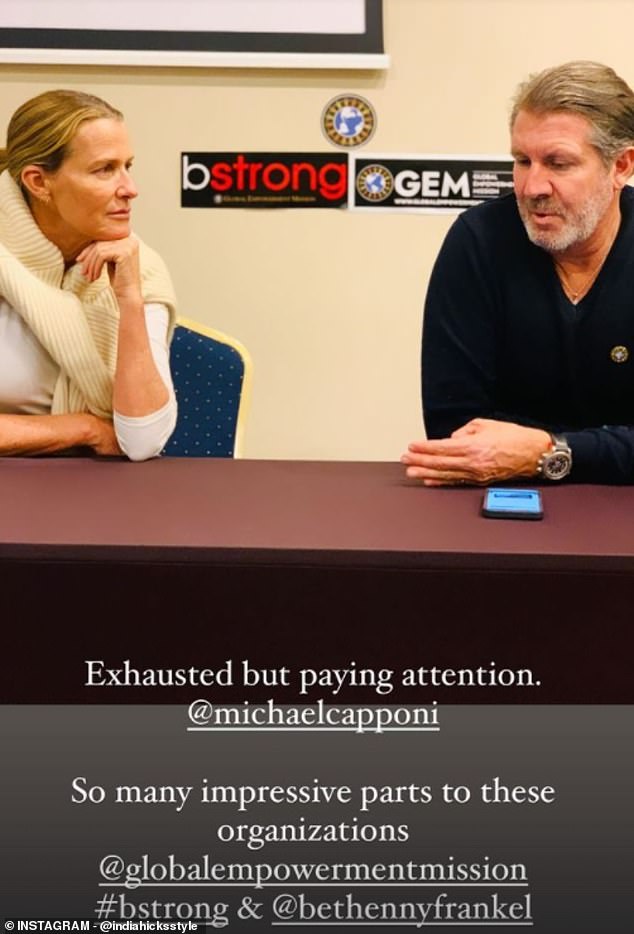 A travel-weary Hicks updated her story with a photo of a meeting with US businessman Michael Capponi, who founded Global Empowerment Mission in 2011 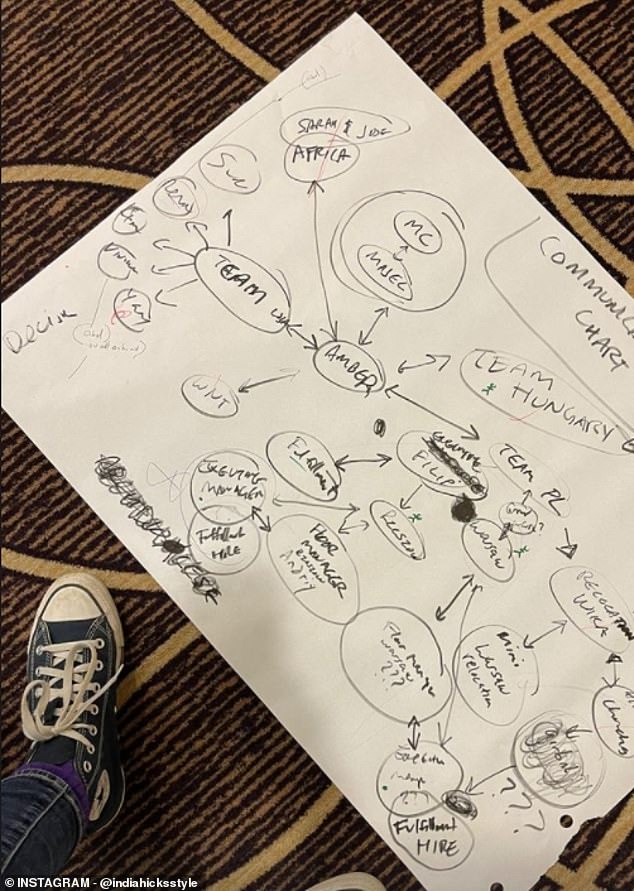 She explained that her friend ‘was also once a refugee, escaping Poland with her parents one Christmas Eve when she was 18 years old so understands more than most what is happening here.’

Hicks then took the opportunity to promote her International Women’s Day frames, telling followers: ‘Recently I’ve been framing lots of memories with the help of @addisonrosshome and their brilliant phone-to-frame service.

‘I edited a collection of frames for them (SWIPE) which are on sale only till the end of this week. Each one is marked with a silver plaque on the back #womensupportingwomen and part of the proceeds go towards @princestrust. The link to this is in my profile.’

Additional photographs on Hicks’ Instagram included two photos in frames by Addison Ross including one that features Hicks with her husband husband David Flint Wood.

Her Instagram story also included a photo of a meeting with Capponi, who founded the Global Empowerment Mission in 2011, and a hand-written map of how resources would be used to help Ukrainian refugees. Nearly 3,000 people have liked the post. 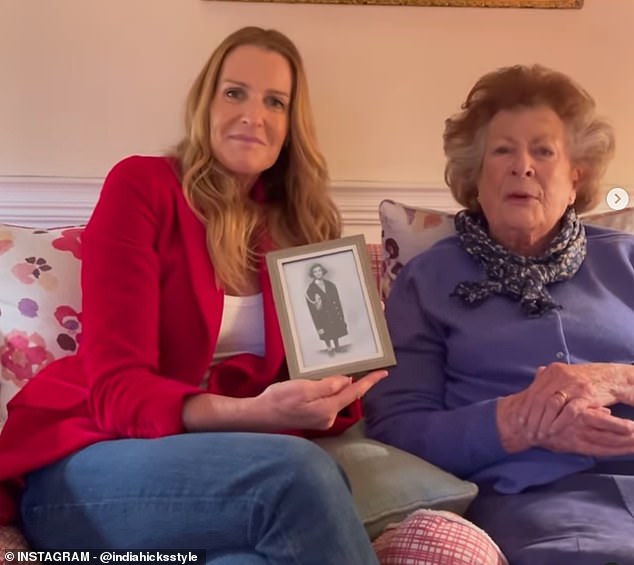 A previous paid post featuring Addison Ross saw Hicks looking at photographs featuring the brand’s frames; the 54-year-old told her followers the company did ‘literally everything from framing to gift wrapping to sending which meant I could just sit on the sofa with my Mum on a chilly January afternoon and rediscover these stories with her’ (Pictured: Hicks with her mother Lady Pamela Hicks)

Previous posts published by Hicks in a paid partnership with Addison Ross have included the hashtag #ad, including one which saw the socialite chatting to her mother Lady Pamela Hicks, 92, about her memories, saying: ‘I snapped the photos on my phone, choose the frames and they did the rest.

‘Literally everything from framing to gift wrapping to sending which meant I could just sit on the sofa with my Mum on a chilly January afternoon and rediscover these stories with her.’

Addison Ross, based in Northumberland, is owned by David and Sarah Ross and has been in business since 1978. A spokesperson for the company told MailOnline it had been ‘delighted’ to collaborate on previous paid campaigns with Hicks but said it was unware her edit of frames would be featured in the socialite’s latest Instagram post.

A spokesperson said: ‘We did not ask her to create the post which went up yesterday regarding her trip to Poland and supporting the charity and in no way would we want it to look like Addison Ross were commercialising a humanitarian crisis and we know that this also wasn’t India’s intention. We support the amazing work that she is doing for a very worthy cause at this current time.’

In 2021, Prince Charles’ goddaughter married her partner of 26 years, David Flint Wood. Three months after tying the knot officially in a traditional English country wedding in September, the couple held a second reception in the Bahamas. 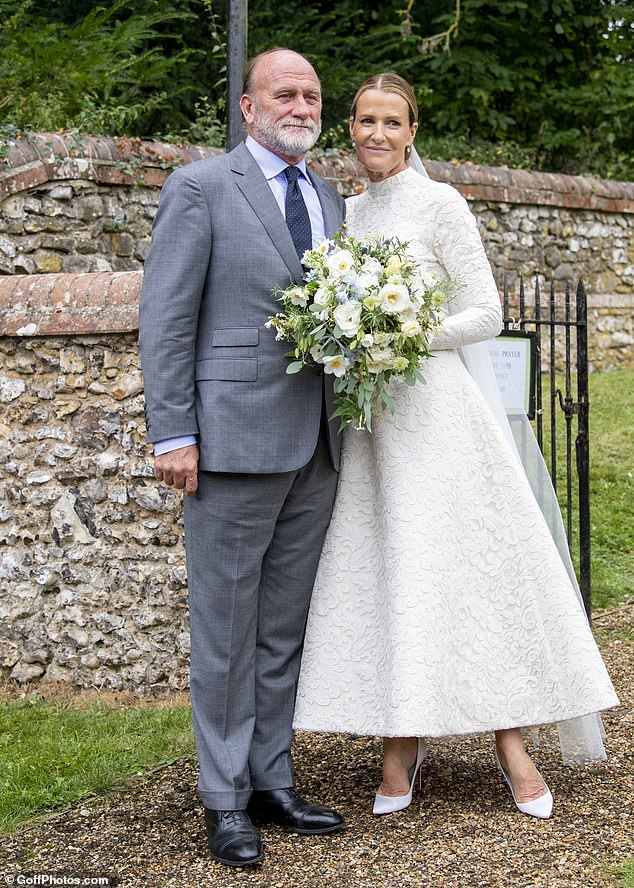 In September, Hicks wed David Flint Wood, her partner of 26 years, in a ceremony in Oxfordshire before a second bash three months later in the Bahamas, where the couple live with their five children