If the name Chrissy Teigen conjures up memories of her Sports Illustrated frolics on the beach, turns out she’d actually rather be in her own L.A. kitchen. There, she prepared for correspondent Rita Braver one of her mom’s recipes: Thai Garlic Fried Ribs. “Super-easy,” she said.

“When we wake up, the first question is, what are we gonna do for dinner?” Teigen said.

And yes, her sous chef is her husband, the Emmy-, Grammy-, Oscar- and Tony Award-winning singer-composer John Legend, for better or worse. “Okay, the grease fire has been averted!” he proclaimed as one pot boiled over.

In fact, things looks pretty hot in the video for the number one song Legend wrote for Teigen, “All of Me.” But if you listen carefully to the very first line of this love ballad: “What would I do without your smart mouth?”

“So, what about that line?” asked Braver.

“Well, anybody that knows Chrissy knows she’s got a quick wit and a sharp tongue and a smart mouth!” Legend laughed. “I think that’s what keeps things exciting and interesting.”

That uninhibited style has led to a role on the cable show “Lip Sync Battle”; and Teigen’s online quips have made her a social media sensation with more than 10 million followers on Twitter and more than 20 million on Instagram. She’s sent out photos of her own stretch marks, and her husband’s butt.

But she also tweets about political matters.

Braver asked, “You have been unabashed in your criticism of Donald Trump, and as I understand he’s blocked you from his Twitter feed.”

“Yeah, I would have blocked me too, honestly!” she laughed.

But nothing’s blocked her growing fan base.

When Teigen was honored this past Monday as one of Glamour Magazine’s 2018 Women of the Year, Legend told the audience, “Now, the number one comment I get from people who used to be my fans is how much they love Chrissy!”

Teigen grew up on the West Coast, where her modeling career began when she was spotted working in a Southern California surf shop.  She is still close with her mom, who is Thai, and her Dad, who is of Norwegian descent. He dropped in as she and Legend introduced Braver to 2-year-old Luna and Baby Miles. 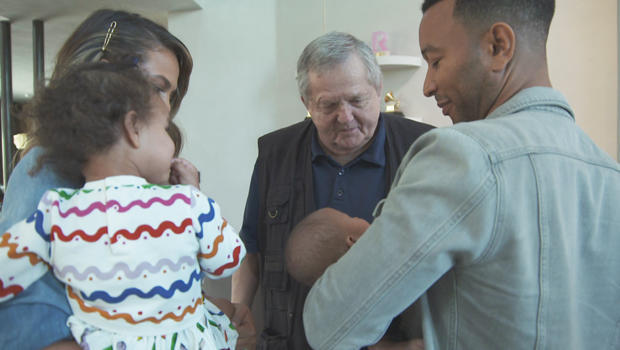 In her usual style, Teigen let her fans know how hard it was for her to get pregnant (she used In vitro Fertilization) and about her post-partum depression after her first baby:

“I think people on social media are my friends and I think they deserved to know. I don’t know, is that so weird?” she laughed. “That’s kind of weird.”

Weird or not, anything Teigen does seems to draw big media attention, like a few weeks ago, when we featured part of this interview on our “Sunday Morning 40th Anniversary Special,” and she confided that she staved off post-partum depression with her second child in part by eating the placenta.

Luckily, she was kidding. But there’s no denying Teigen’s fascination with food. Her first cookbook, “Cravings,” was a bestseller, and she has just released a sequel, “Cravings: Hungry for More.” 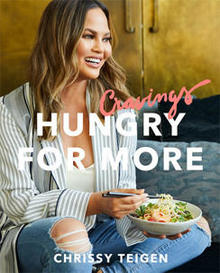 Braver asked, “How do you balance the love of eating and the fact that you’ve gotta look good at the same time?”

“I don’t care that much anymore!” she laughed. “I tell John I’m, like, I don’t really have to ever look good in a swimsuit again. I guess that’s the only way to put it!”

Sports Illustrated’s loss may be the rest of the world’s gain. “Cooking, for us, isn’t just about eating; it’s about the whole experience of cooking,” Teigen said.

“And doing it together?