Opposition leader Anthony Albanese is yet to commit to a second debate with Prime Minister Scott Morrison ahead of the election and has left the heavy lifting to Labor colleagues on his first day of campaigning after a week’s isolation.

After appearing on breakfast television on Friday morning, Albanese declined to hold a press conference before flying to Perth ahead of Labor’s weekend campaign launch. 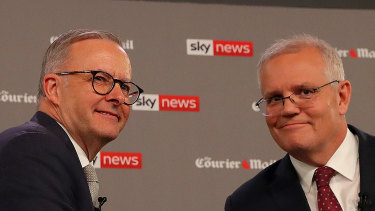 Anthony Albanese insists he is willing to debate Scott Morrison again, but will not let the prime minister control the timing or venue.

“I’m up for more debates,” Albanese told the ABC. “But I’m not up for the prime minister deciding when, who, how that all occurs.”

Labor officials are still weighing up whether to agree to a debate hosted by the Nine network on May 8, wanting to see whether their leader has completely recovered from the virus.

Morrison has accepted invitations to debate his opponent live on Nine and Seven and accused Albanese of having a “quiet week” in comparison to his own time in isolation earlier this year.

Shadow treasurer Jim Chalmers was forced to defend his leader’s absence while fielding questions from journalists in Sydney, while Albanese took a break from the media before flying to Perth for Labor’s weekend campaign launch. Albanese fronted the cameras briefly before boarding his plane, thanking NSW Health for its support and wishing his deputy Richard Marles well after he tested positive to COVID-19, but did not take questions.

“We’re very pleased that our captain will be back on the field with us,” Chalmers said. “Consistent with doctor’s orders, he is coming back, making sure that he can do enough on the first day back.“

Morrison flew to flood-ravaged Lismore to meet with community members on March 9, the day he emerged from COVID-19 isolation, and was criticised for shutting out journalists from an official visit but held a press conference alongside Page MP Kevin Hogan later that day.

Asked why Albanese could not take questions from the media pack after his breakfast television appearances, Chalmers said the Labor leader was “returning to the fray” and that journalists would have “a number of media engagements over the coming day”.

“The campaign [has] still got three weeks to run,” he said.

Chalmers denied that Albanese was reluctant to lock in a second debate with Morrison, saying negotiations with broadcasters were happening in the normal way.

Albanese told Seven’s Sunrise on Friday morning he was “feeling much better” after his week recovering from COVID-19, dismissing Morrison’s comments suggesting that he had not been active while isolating.

“I’ll leave those comments for other people,” the Labor leader said, saying he had opted to follow health advice.

“I did interviews each and every day during that period. We did a lot of work on policy.”

Speaking on Nine’s Today, Albanese said he was relieved to be out of isolation in time for Labor’s campaign launch in Perth on Sunday after “a rough couple of days”.

He said while the virus “absolutely did knock me around” he had an easier time than others, which he attributed to being “triple vaxxed”.

On ABC television, Albanese proposed a debate at the National Press Club to be televised on the national broadcaster and said national secretaries of the Liberal Party and Labor parties “should sit down, work these issues through like adults”.

He said the first leaders’ debate had been held at a time and date of Morrison’s choosing, “but he can’t get to choose the entire process” and that he had to factor in prior engagements.

The May 8 proposal put forward by the Nine Network with The Sydney Morning Herald and The Age would air a leaders’ debate during the usual 60 Minutes timeslot on Sunday night to ensure a large audience.

The two leaders debated live on Sky News on April 20, the day before Albanese announced he had tested positive to COVID-19.

As Albanese emerged from isolation, Marles said he had been “looking forward” to travelling to Perth for Labor’s campaign launch on Sunday but would now be spending seven days in isolation after testing positive to COVID-19 on Friday morning.