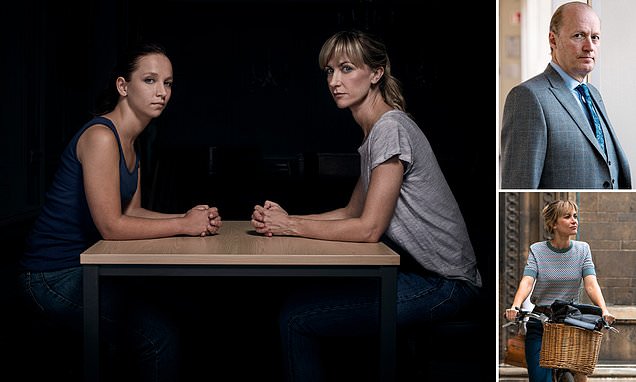 If you liked liar, you’ll love cheat: Just like the 2017 rape drama, you won’t know who to believe in ITV’s new murder thriller, so is university lecturer Leah the killer – or her oddball student Rose?

Katherine Kelly admits to being a cheat.

She proved that a few hours before we meet, while spending time with her daughter, four-year-old Orla.

‘We played a board game involving adding and subtracting, and I cheated so she could win,’ says Katherine, the actress best known for her role as Lady Mae in ITV‘s Mr Selfridge and before that Becky McDonald in Coronation Street.

‘I didn’t want the tears that would have come if she’d lost, so I cheated for the greater good.’

The phrase ‘for the greater good’ crops up frequently when we chat about Katherine’s latest TV drama, Cheat.

It’s a four-part ITV whodunnit, shown over four consecutive nights, that boasts Harry and Jack Williams – the brothers who wrote The Missing, its follow-up Baptiste and ITV’s psychological thriller Liar with Ioan Gruffudd and Joanne Froggatt – as executive producers. 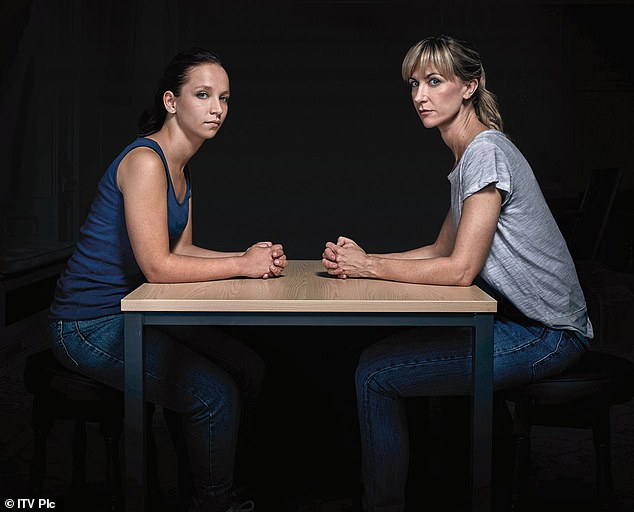 In Liar, it was who was telling the truth about the rape, Andrew or Laura.

In Cheat, it’s not only who is the killer, but who have they killed? By the end of episode one viewers will know who died, but not the murderer, whose identity will be revealed later.

The suspects are Katherine’s character Leah, a university lecturer, and Rose, one of her students played by Molly Windsor, the 21-year-old who won the Best Actress BAFTA last year for the Rochdale abuse drama Three Girls.

Leah believes Rose is a cheat, that the sociology essay she recently submitted wasn’t her own work.

She fails her on it and shames her in front of her fellow students.

‘Leah just knows she’s cheated, all her other essays were of a much lower standard,’ explains Katherine.

‘She believes Rose has to learn she can’t go through life cheating, eventually such behaviour will bite her on the bottom.

‘They all justify their actions on those grounds.’

By the time viewers see the showdown between Leah and Rose, they will know there’s more to the two women’s relationship than a dodgy essay. 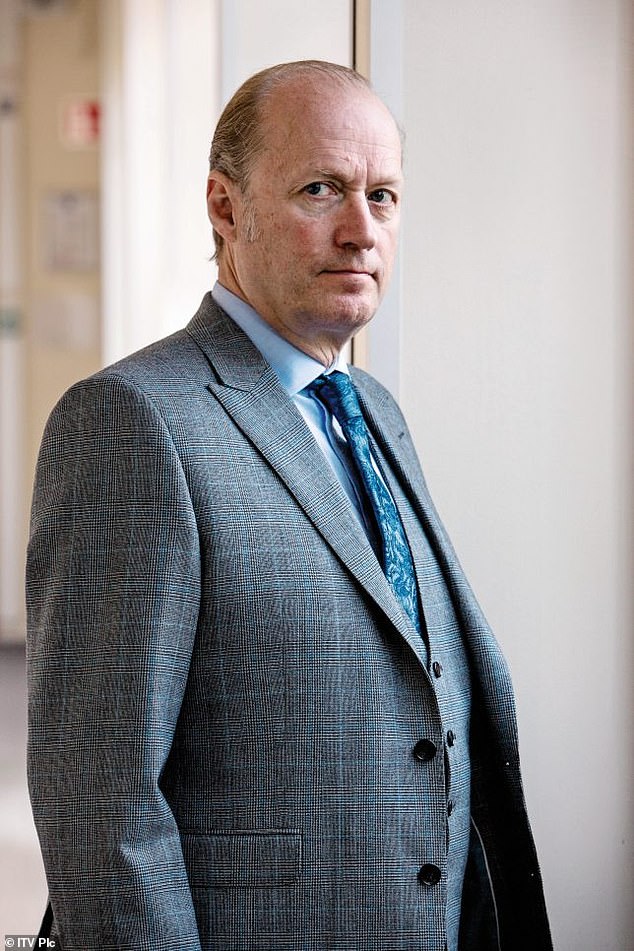 At several points in the first episode, we cut to prison scenes and see them on opposite sides of a glass panel.

One is behind bars for murder, the other is visiting – but we don’t know which is which.

Rose, whose father William (played by Adrian Edmondson) is a wealthy benefactor of her college, is revealed to have an obsessive interest in Leah.

Her laptop contains pictures of Leah with her husband Adam (played by Tom Goodman-Hill, who was also in Mr Selfridge), a fellow lecturer.

‘Rose doesn’t fit in with the crowd,’ explains Molly.

‘She doesn’t feel the pressure to do what’s expected of her. From a 20-year-old, that’s intimidating.’

Rose visits Leah’s house to show her the study notes she used to write her disputed essay, only to discover Leah isn’t at home.

She’s invited in by Adam and accepts a glass of whisky from him.

Leah, it transpires, is much troubled and Rose is adding to her levels of stress.

‘Leah is a professor of sociology so she understands human beings and human nature,’ explains Katherine.

‘That’s why Rose is such a shock to her – she can’t work her out and that perplexes her.’

Leah’s problems are professional and personal.

‘She‘s trying to write a book and get it published, trying to get her third-year students the grades they deserve and, in theory, she’s trying for a baby.

‘So she’s not drinking alcohol, which is making her feel more stressed and she can’t take tablets to get to sleep for that reason.’

The man who’s conjured up these two complex central characters is Gaby Hull, a newcomer with only a few co-written episodes of Benidorm to his credit.

But Harry Williams says he and his brother had no hesitation offering his script for Cheat to ITV.

‘It’s very rare for me to get to the end of a script that’s been submitted to us, but I was at the end of this one before I realised – it was so readable,’ says Harry.

‘All Jack and I did was add more of a thriller element to it, that part of it needed turning up.’

Gaby drew on family and friends who are academics for inspiration.

‘I heard one talking about how they were convinced their student had cheated but they couldn’t do anything because there are online services that write your thesis for you, and they’re so sophisticated it’s hard to prove.

‘I thought it was a good basis for a story, especially if the professor has high moral standards and is determined to expose what they think is cheating.’

A lot of the action was filmed within the beautiful confines of Cambridge University, but the story takes place at an unnamed institution.

The lecture theatre and courtyard at Gonville & Caius College were used and there are aerial shots of the campus.

Katherine describes Cheat as Cambridge noir, with last summer’s long, balmy nights adding an air of menace to the drama. 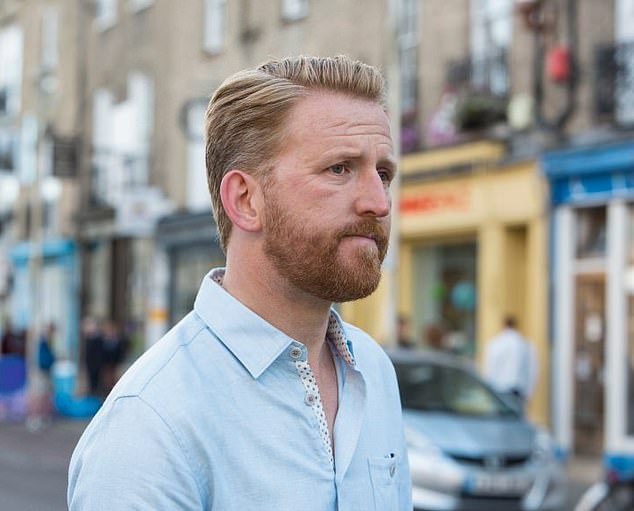 ‘We did a lot of filming around twilight last summer, which gives the drama a slightly unsettling feel,’ she says.

‘Nothing is quite what it seems. You expect the story to go in one direction, and the opposite occurs.

‘I never knew what to expect when I was reading the script.’

Katherine was at ease with the role of a lecturer, thanks to lots of research.

‘I didn’t go to university, I went straight to RADA aged 18, but I did my homework on Cheat.

‘I wanted to know all about the world inhabited by people like Leah and I wanted to know the dirt, how likely it was that you go out with a lecturer, what drugs people take, how much they drink.’

She’s reluctant to reveal what she discovered, but some of the excesses on screen rang true from her research.

‘Rose’s case isn’t uncommon, essay cheating does take place at university. And I found out plenty of gossip too!’

If a life in one of Britain’s seats of learning didn’t appeal to Katherine, the private life of her character appealed even less. 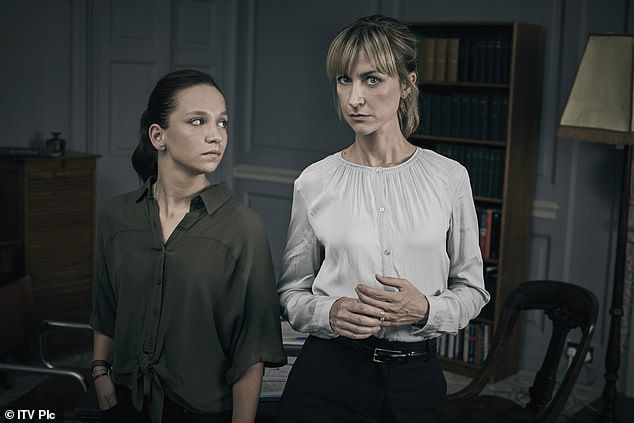 Mother-of-two Katherine (pictured right with Molly) revealed she’s had to turn down jobs that would take her away from family commitments, Cheat was filmed an hour away from where she lives

‘It’s a mess! Leah isn’t sure she wants a baby with her husband, he keeps saying the wrong things and she’s lusting after another lecturer.

‘She has plenty to sort out.’

She has two daughters, Orla and Rose, who’s two, by her Australian husband Ryan Clark, who’s in IT, and she’s managed to maintain a presence on our TV screens despite taking time out to have her children.

Since 2013 she’s filmed Mr Selfridge, starred in The Night Manager and Happy Valley, shot Sky’s action drama Strike Back in Jordan and Budapest, and played Andrea Quill in Doctor Who spin-off Class.

‘I’m lucky I can take my children with me when I’m working, and on Cheat I was based at home because we filmed only an hour away.

‘If you added up all the hours I’ve worked since I became a mother I’ve probably only worked part-time, but I’ve done it in very concentrated bursts.

‘I’ve had to turn down jobs – such as one in South Africa – and cut back on the extras that go around the work: premieres, interviews, parties.

‘I hope I’ve got the balance right, but I don’t think you ever fully crack it.’