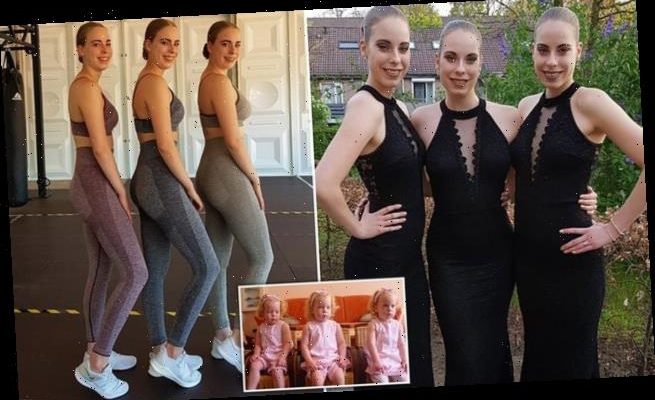 Triple threat! Identical triplets who sport matching hairstyles and all have the same job admit they have to wear different coloured clothing to avoid confusing each other

Sam, Fay and Mel van Wely are rarely seen apart whether that be at work or in the gym – and have an unwritten rule that they can’t alter their appearance without consulting the others first.

Despite having the same dress sense, the 18-year-old triplets from Nijmegen, Netherlands, opt to wear different colours to avoid confusion – amongst themselves.

With only a small scar under Fay’s eye to tell them apart, it is no wonder the teachers didn’t notice the wrong sister was in class during their pranks at school.

Sam from Nijmegen, Netherlands said: ‘We love being triplets and do everything together because we have the same interests. But we don’t wear the same outfits because it would be too confusing. 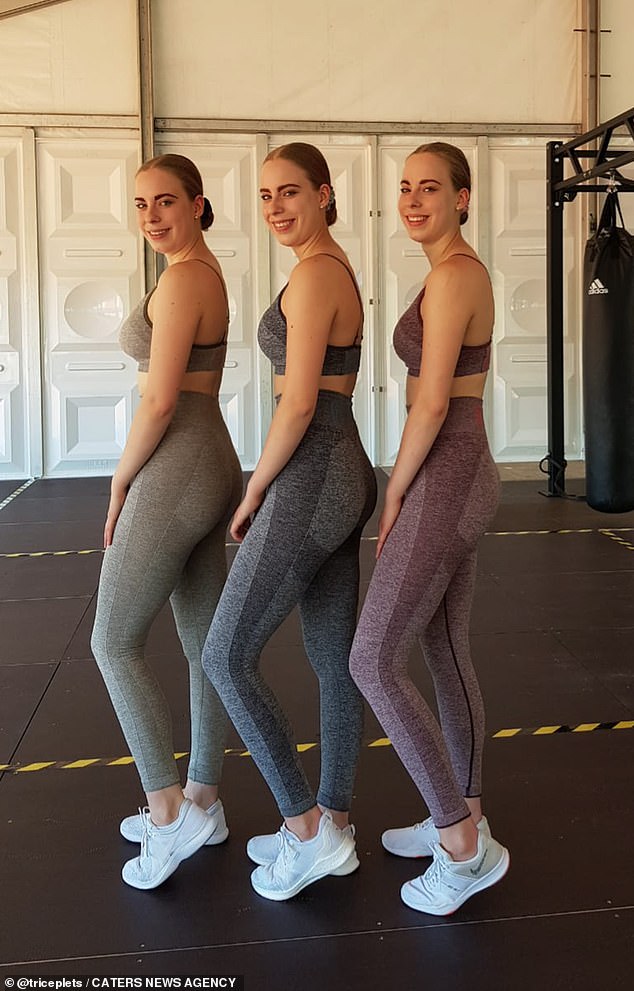 Seeing triple! From left to right: Sam, Mel and Fay van Wely, 18, from Nijmegen, in the Netherlands, are rarely seen apart whether that be at work or in the gym – and have an unwritten rule that they can’t alter their appearance without consulting the others first 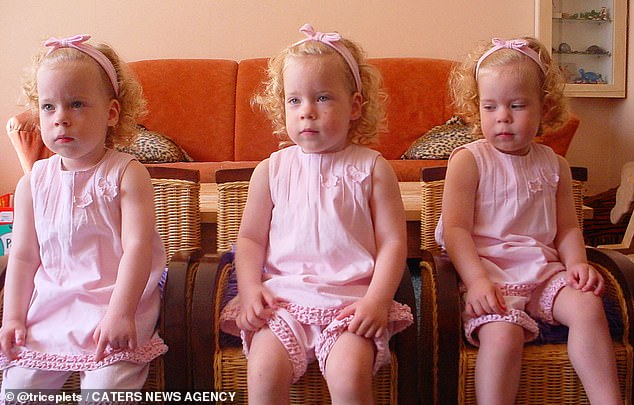 The triplets as toddlers. A scar on Fay’s cheek is the only way to tell them apart (from left to right: Fay, Mel and Sam)

‘However for prom last April, we tried on 40-50 dresses but only one looked good. So we decided to wear the same to mess around with our friends and teachers for one last time.

‘We did our hair and makeup the exact same and we even mixed each other up. I went up to Mel and thought it was Fay and vice versa. It was hilarious.

‘We attract enough attention without wearing the same outfits – people always stare at us in the streets and ask if we are triplets. 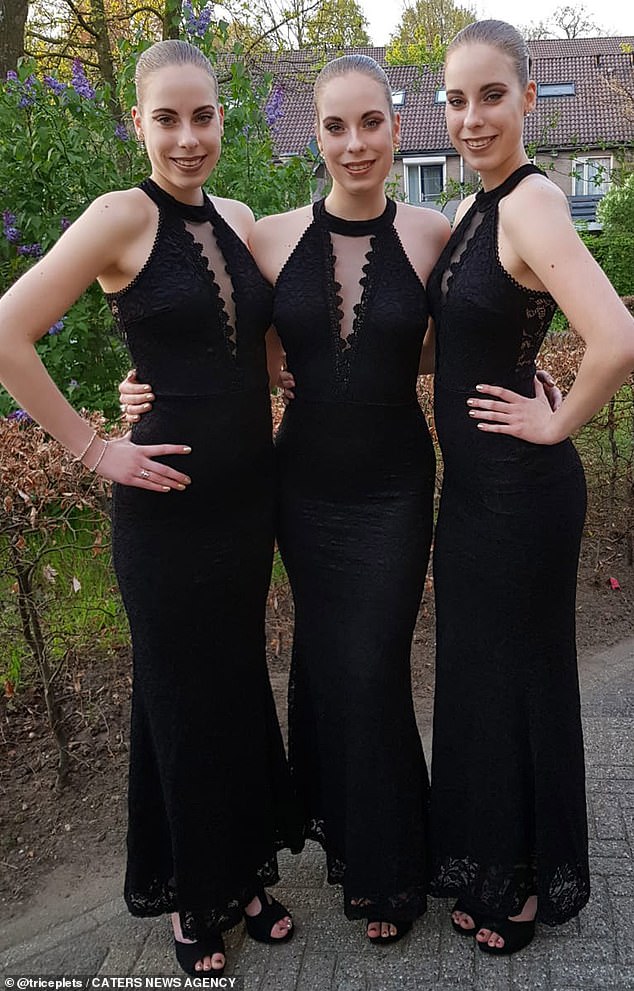 The siblings decided to pull a prank on their friends and teachers for their prom night by rocking the exact same dress, makeup and hairstyles

‘It would be weird if we did go anywhere without people looking.’

Despite their mum’s advice to be individuals, the triplets refuse and continue to lead identical lifestyles.

The trio spend most of their free time in the gym where they wear the same attire, but in different colours. They say their instructor is able to tell them apart by the way they work out. 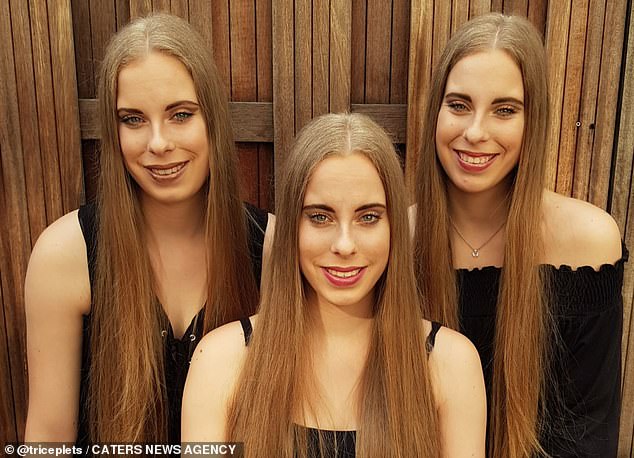 While they are determined to live as individuals, the triplets work at the same store in different departments 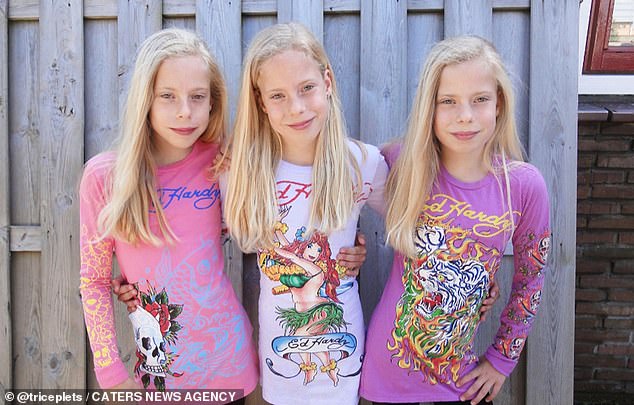 Ever since childhood, it’s been nearly impossible to tell one of the triplets from the others (pictured: Fay, Mel and Sam in similar t-shirts)

Fay said: ‘Our mum Indira, 51, gets frustrated with us because she thinks we should do more things independently but everything is better when we are together.

‘But we have been in the “bubble” of being “the triplets” for so long, it is very hard to break through that pattern.

‘We work in the same store in different departments, but always on the same shift so we can travel to work together.

‘Customers always continue a conversation with one of us thinking it was the person, they’d just spoken to which is quite funny.’ 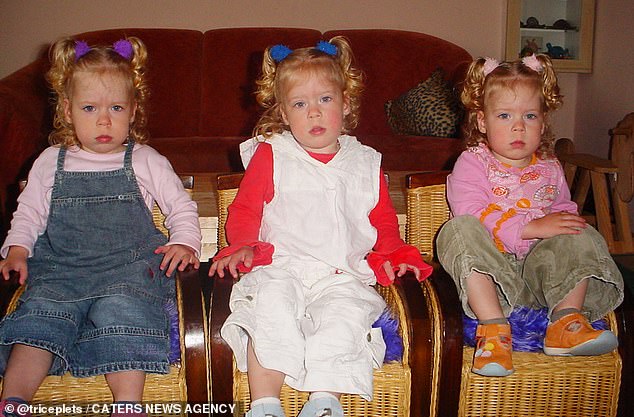 The triplets’s mother, Indira, 51, advised the girls to lead individuals lives, but the siblings share everything in common (Fay, Mel and Sam as toddlers) 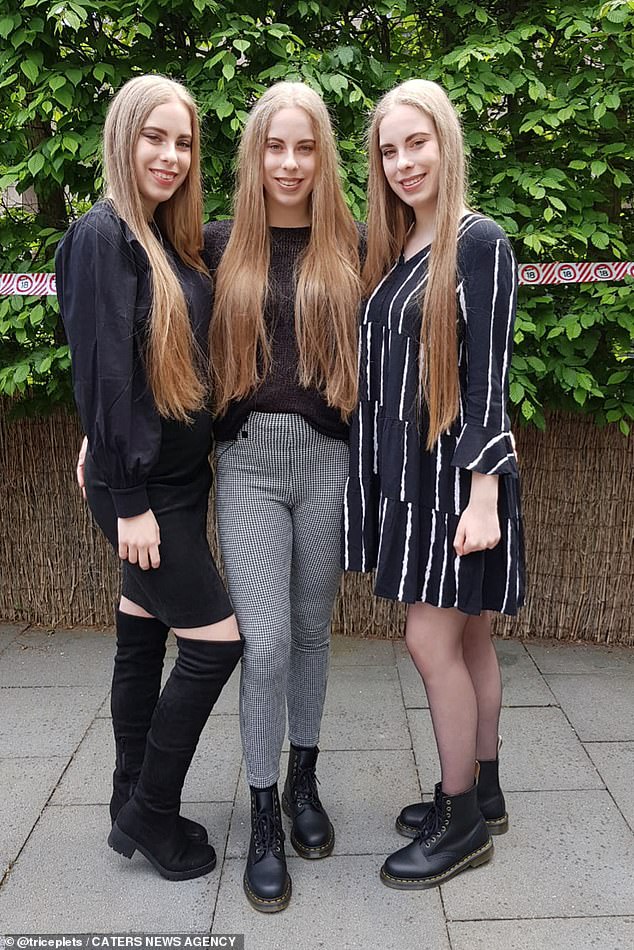 Sharing a similar fashion sense, Mel, Fay and Sam say their identical looks prove confusing even when they are wearing different clothes 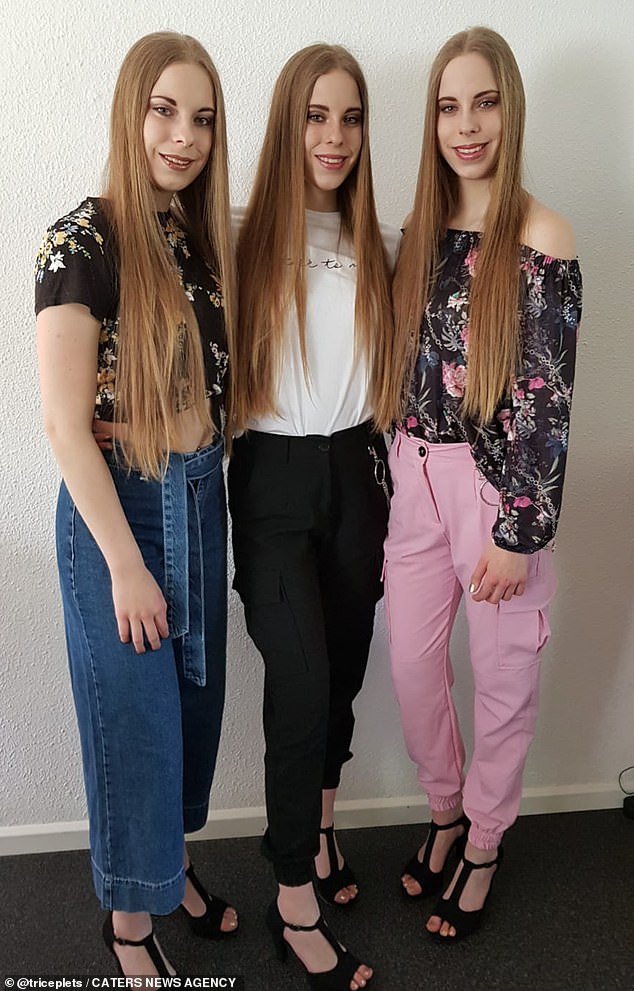 The three sisters are all vegetarian and discuss everything among themselves before making a decision, especially when it comes to changing their appearance with a new hairdo

The sisters, who are all vegetarian, discuss everything and anything prior to making a decision – even what to have to eat.

Mel said: ‘We would never cut or dye our hair without the other two doing theirs too. There have been times when one of us would like to have short hair but the other two say no.

‘Once Sam and Fay got their hair cut shorter but I wanted to keep the length but then we didn’t look the same. I actually cried because I didn’t like being the odd one out, so I got mine cut the same length the following day.

‘We do everything the same, even eat the same meals – at the same time – it’s hard for us not to do this because we are set in our ways.

‘We rarely argue and if we do, it is mostly about food!’ 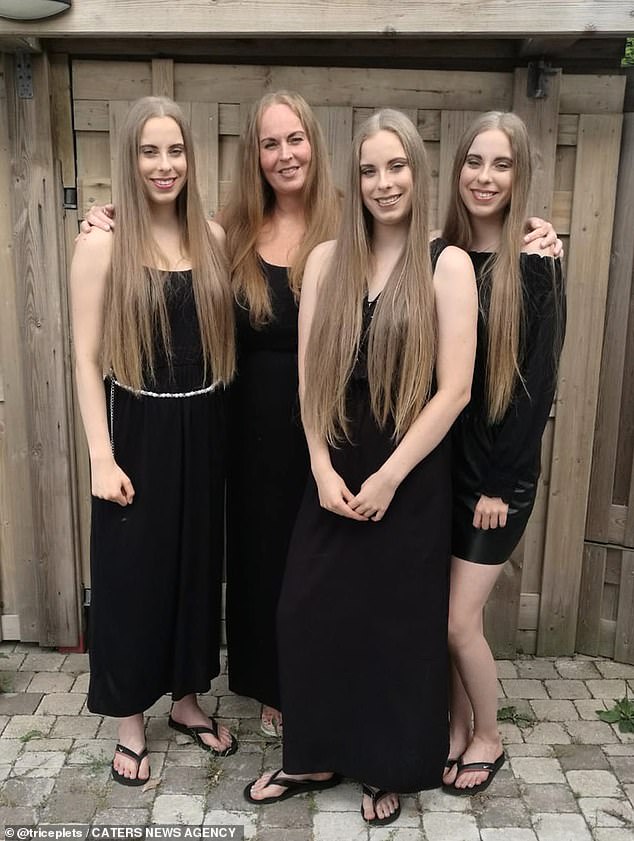 The triplets bear a strong resemblance to their mother (pictured) as well. They hope to make it as influencers 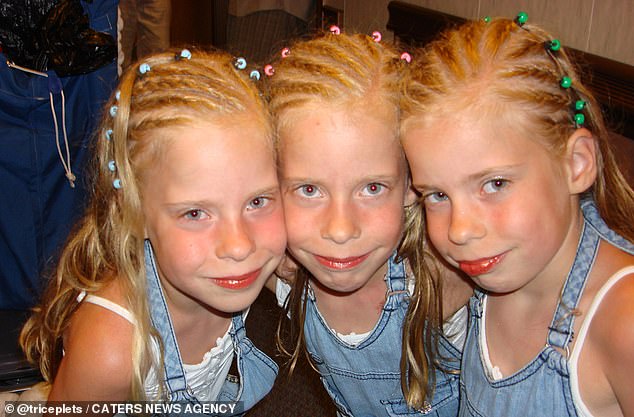 The triplets have always rocked the same hairstyle and admitted that if two of them were to cut their hair a certain way without consulting with the other, she’d feel like the ‘odd one out’ 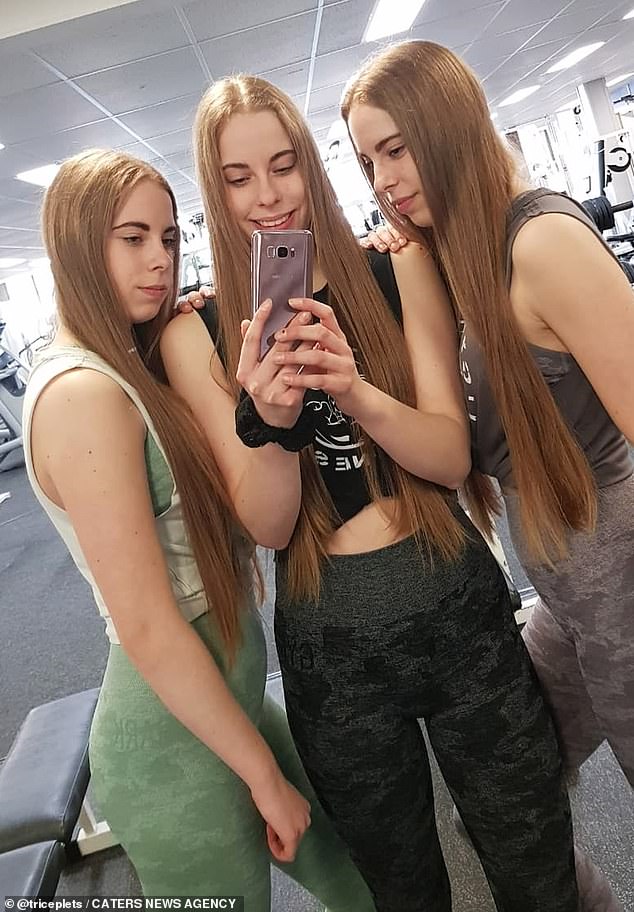 At the gym, each of the girls’ trainers can tell them apart by their workout regime, but they rock similar outfits 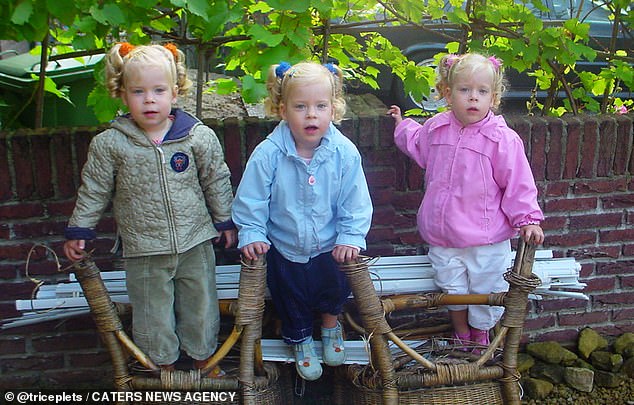 The girls, pictured here as toddlers, said they hardly ever argue and if they did, mostly about food