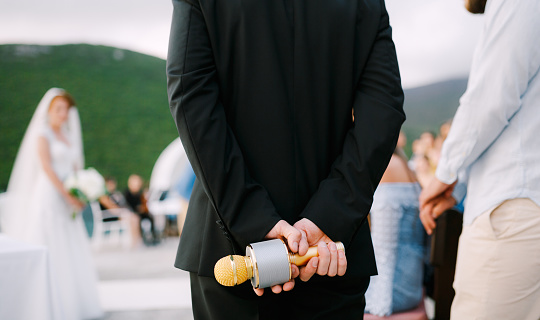 The lady on the other end of the phone sounded anxious.

‘Are you discreet?’ she asked. I assured her that we were and that we sign non-disclosure agreements with many of our clients.

‘It’s just that I’m writing a eulogy,’ she explained, ‘during which I will reveal the extent to which my brother defrauded our mother in her last years. And as we leave the church there will be police outside ready to arrest him for her murder.’

I wasn’t sure whether she needed an NDA or a stiff drink!

The concept of having a stranger write your speech for you, on one of the most important days of your life, might seem bizarre. But what if you’re terrible at writing?

What if your strengths lie in finance and not feelings? What if your nightmares have you giving a best man speech to a room full of yawning wedding guests?

This is why, on any given Saturday during the summer season, my team and I are likely to have written speeches for at least 25 weddings across the world.

An old friend, Mark*, asked me to write his best man’s speech for a wedding he was attending in Vegas. I found myself dictating it to him over a couple of beers, after which he suggested: ‘You should do this for a living’.

We put an ad in Private Eye magazine and someone got in touch on the day of publication for a wedding speech.

I was so delighted that it almost seemed churlish to charge him. I ended up visiting him three times in his office to get details and wrote the speech for £200.  The experience was everything I’d hoped it would be (if not commercially sustainable at those rates!).

The business grew as more of a hobby over the next couple of years.

I was soon writing up to five speeches per week on top of a day job as a brand consultant. Demand grew even when I started charging more and I decided to go full-time.

We are now a team of 10 with six writers, a coach and a client management team.

We write scripts for job interviews, for marriage proposals, funerals, and for court cases

Our clients give speeches at weddings, TED events, conferences, golf clubs and political meetings to name but a few.

What we’ve learnt over the years is that discretion is key.

Clients prefer that friends and colleagues think they’ve written their speeches alone and that’s fine by us.

We regularly receive requests to meet in anonymous coffee shops far from a client’s home or workplace.

We email addresses set-up solely for the speech. We send invoices that don’t mention speechwriting.

We’ve been compared to a botox specialist: the better the job we do, the less likely a client will be to broadcast it!

We revel in the anonymous role we have played at events around the world for 15 years.

Best men speeches are often the juiciest. We recently found ourselves double-checking that a best man really did wish to reveal details of his steamy ménage a trois with the groom during a speech to 200 people.

His response? ‘Yes, and let me tell you about the time the bride’s dad got involved!’

We have been privy to stories that would shock the contestants of Love Island.

There was the bridegroom having an affair with the bridesmaid, the father-of-the-bride videoing his speech because he expected to be behind bars on the big day, the best man intent on revealing the groom’s hobby of urinating in every room at a house party, other than the one with a toilet.

The secrecy transcends weddings. We write scripts for job interviews, for marriage proposals, funerals, and for court cases. An emotional parent suggested we were the reason he was given full custody of his three children.

A client I had helped in business asked me to write him a perfect marriage proposal for an upcoming trip to India with his girlfriend.

Two days later I answered a call from a lady who wanted me to write a perfect marriage proposal for an upcoming trip to India with her boyfriend!

On one never-to-be-forgotten occasion I was interviewing someone in a café in advance of his wife’s 60th birthday.

Half an hour in, he froze. ‘She’s seen us,’ he whispered. Seconds later, the love of his life walked up to our table. ‘Darling,’ he explained calmly, ‘this is Lawrence. I’m interviewing him about doing the photography for your party’.

So, here I am, saved as a pseudonym in a contacts list writing speeches that will, I hope, be rapturously received, but with no link back to me.

An international sportsperson gave a speech in India and described it as the ‘best of its kind ever delivered’ which was thrilling, but will never make it onto my CV.

Do I mind? Not a jot. My team and I revel in the secrets and white lies. We love the relationships we build and the fact that many clients become our firm friends over the years.

I love my job. I meet fascinating people talking about subjects that range from a new way to replace fossil fuels, To a stump speech for an election campaign.

I am allowed to ask brilliant people the most fundamental questions about their life and work. I hear about ideas for intellectual talks long before they are seen by millions online and I write about products that may, one day, change the world.

Remaining a secret is a small sacrifice to pay. Even when the subject really is a matter of life and death, and possibly even murder!

*Names have been changed.