As I opened my computer, I was shaking slightly.

I had decided to sign up to 23andme, a DNA testing and genomics company, to help me track down my birth mum.

At 59, I was aware I may have left it too late but, as my friend had told me, ‘In five years’ time, you’ll be five years older, and the time will pass regardless of whether or not you start looking for your mother.

I’d always known I was adopted. My adoptive mum and dad were transparent about it from the start and, together with my adoptive brother, we were all extremely happy.

I really thought I was the luckiest kid on the block and told people so if they asked.

Because of the openness surrounding my adoption, it felt ‘normal’ on so many levels. However, no amount of openness and love will stop the questions that come with adoption.

‘Why didn’t my birth mother want me?’

‘Why did Mum and Dad adopt me?’ 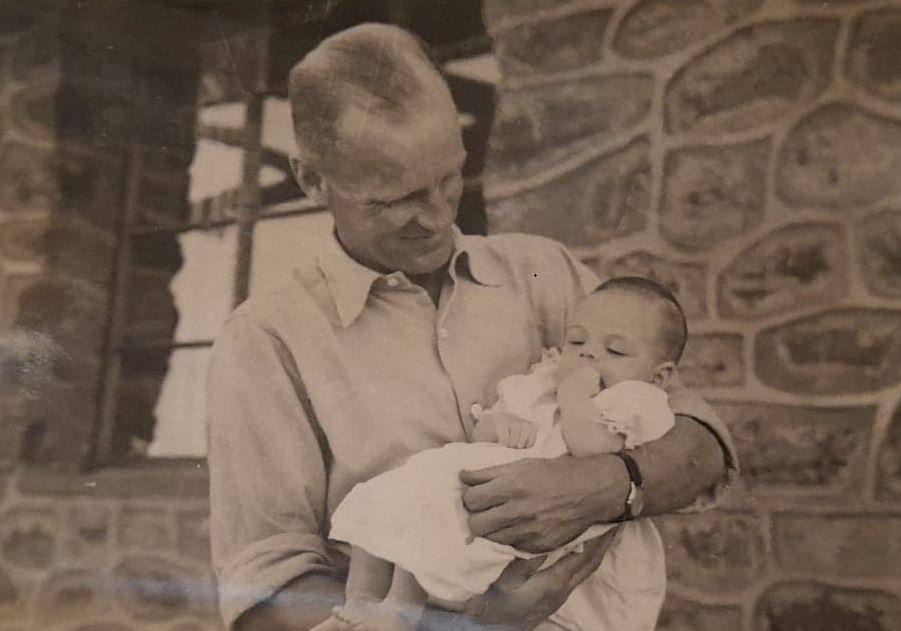 Oddly enough, it was always my birth mother I wondered about, rather than my biological father. I don’t really know why.

But I never felt able to voice these questions to my adoptive parents, it felt so profoundly disloyal and ungrateful to do so.

I wish I had asked, but it’s years too late now – both my adoptive parents died when I was in my 20s. And, as well as the questions I had, for years I carried my insecurities, my doubts, my feelings of not being enough.

For much of my life, I was in denial about my birth mother. I always told myself that I didn’t want to know her story, I had no interest whatsoever in finding her.

This continued even when I was old enough to be able to rationalise her situation from a woman’s perspective – realising when I became a woman myself, and had my own children, how deeply wrenching it must have been for her, to feel forced to give me away.

I believed that she hadn’t wanted me, and gave me up because I wasn’t good enough for her. My head knew that this was rubbish, but my heart just wasn’t logical about it.

Then, in my late 50s, I met and started working with a spiritual mentor and an intuitive energy healer.

I loved the healing work – she identified and released so many years’ worth of old, outdated feelings that I had never been able to deal with, and as she did, the wounds that I’d been living with got smaller and smaller, and hurt less and less.

And, as I let go of the hurt, I learnt to forgive my birth mother for the choices she had made.

At the same time, my mentor was urging me to look for my biological family – she believed that doing so would give me peace.

Because of all the healing I had been doing, I was in a much better space than I had ever been before; and readier than ever before to start looking for my birth mother.

I signed up to 23andMe and, roughly a year later, I applied to the Zimbabwean authorities – where I had been born – for my unabridged birth certificate.

I was scared. I was afraid. What if she really never wanted to see me again, once she had given me up for adoption?

Then, last year, at 63, after a long process, I finally found my biological siblings.

About nine months after joining 23andMe – I’d given up hope, actually – I found a family connection in a second cousin, who lived in Australia. She contacted me and introduced me via WhatsApp and email, to her grandmother still living in Bulawayo, where I was born.

To cut a long story short, the grandmother’s second cousin was creating a family tree and there was a big gap in it, about which they knew very little. They were all convinced, because of a family likeness, that I slotted in there somehow.

Meanwhile, it was taking a long time to get a copy of my birth certificate. But I was introduced to a facilitator living in Zimbabwe who helps adoptees get their original birth certificates.

After I started working with her, things sped up and, more than two years after originally applying, I got my unabridged birth certificate – and my birth mother’s surname.

Serendipitously, the gap in the family tree, aligned with her name. The creator of the family tree had a copy of my birth uncle’s death certificate – in Nottingham – so we knew that he, at least, had migrated from Zimbabwe.

I started working with an agency in the UK, who helped me to trace my uncle’s family.

Through them, I found my four siblings, who were all living in South Africa.

I decided to contact them, via the agency. I was absolutely terrified of another rejection. Suppose they didn’t want anything to do with me?

Well, luckily for me, they turned out to be wonderful people, who despite the enormous shock of suddenly being presented with a completely unexpected and never-anticipated, older sister, welcomed me with kindness and empathy.

Four years into my search, I spoke to two of them – a brother and a sister – via a WhatsApp voice call.

I was very emotional, almost overwhelmed. My brother lovingly told me we were the ‘good-lookers’ in the family – and that we both resembled my biological mum. It felt astonishing to speak to a ‘real’ sibling after more than 63 years.

They told me what they could about what their mother’s – our mother’s! – situation might have been when she had me.

Reportedly, prior to her marriage to the father of my siblings, she was engaged to a young man who died in a tragic motorbike accident; this may have been my father.

They spoke about their lives with her, about what a wonderful mum she had been to them, and filled me in on her life story and how they all ended up moving from Zimbabwe to South Africa.

One of my brothers had difficulty accepting that our mother had children outside of her marriage, so we have had an interaction via email, in which he was kind but a bit flabbergasted about it all.

The last brother, I have not heard from at all. I’m able to accept this – perhaps in his shoes I might also not want to reach out to someone who is, essentially, a stranger.

I have since exchanged photos on WhatsApp – with the siblings I’m in touch with – of our mother and of their families, my nephews and nieces.

Apparently I look very like our mother looked – more so than any of my siblings! It’s hard for me to tell – I find I can’t be objective when looking at images of her.

We have no current plans to meet – however, if I visit South Africa in the future I would like to arrange this.

My birth mother died several years ago, and never told her other children about me.

Despite still not knowing why she decided to give me up for adoption, I find that I’m really calm and settled now when I think about her.

The search itself, which took me about four years and culminated with finding my siblings, was a period of intense healing for me.

I met amazing people in my search, people who turned out not to be closely related to me, but who were so kind and helpful.

People, who I have never actually met, actively delved into family histories and tried to find if I might belong somewhere.

I realise now, more than ever, that I’ve been incredibly lucky to have been helped, supported and loved, for all of my life; despite having felt that I wasn’t enough for my mother, and that she, as my primary care-giver, was unable to fill the role.

I am enormously grateful to have reached the space I’m in now, to have finally closed the mother wound, and to feel at peace with my story – her story.

I’m so pleased I listened to my mentor, in my late 50s, and took the first step in searching, because, as I discovered, it’s never ‘too late’.

I do wish, though, I had started looking for her sooner. If I had, maybe we might have been able to meet.

Age is Just a Number

Welcome to Age is Just a Number, a Metro.co.uk series aiming to show that, when it comes to living your life, achieving your dreams, and being who you want to be, the date on your birth certificate means nothing.

Each week, prepare to meet amazing people doing stereotype-defying things, at all stages of life.

If you have a story to share, email [email protected]