You’ve been there before: You’re scrolling through your Instagram feed when you see your favorite celeb post about their favorite new product — a face serum, vitamins that will make your skin brighter, or a specialty food service. You can’t help but want to be like the stars, but are the products worth it? In Elite Daily’s new series, I Tried, we put it all to the test. We’re trying those products as well as celebrities’ health and wellness tips, recipes, and life hacks. We’ll do the leg work and tell you what living like your fave star is really like.

Jennifer Lopez has the right attitude in terms of what it means to work on her fitness — and seriously, she’s always had that attitude. During an interview with Oprah Winfrey back in 2003, for instance, the Second Act star talked about how she never felt the need for her body to look a certain way throughout her career, and how, for her, the point of exercising and taking care of herself has always been to simply feel good. Ever since then, I’ve idolized the performer as someone who values health and strength over aesthetic, and to gain some of that perspective, I tried J. Lo’s booty workout for two straight weeks. Not only did the three-part routine make me feel bootylicious by the end of my trial, but I can honestly say that a stronger butt wasn’t the most valuable takeaway of it all.

During their 2003 interview, Oprah opened up a mini Q&A with the audience, and one woman asked J. Lo about the pressures to look a certain way in Hollywood, and if the singer ever felt she needed to conform to those standards. Candidly, Lopez responded by saying that she’s always felt really happy in her body. “Sometimes I don’t work out and I get a little jiggly and all that, and I gotta get back in control, but it’s just for me," she explained, "so that I feel good.”

The values that Lopez communicated in that interview — and that she’s continued to stand by throughout her career and in her social media presence — are inspiring, to say the least, and one of my main goals in my trial of her workout routine was to get a taste of that inspiration, that feeling of accomplishment and confidence, regardless of what the results might actually look like in the end.

It didn’t take much digging around the internet to find an array of articles on the many fitness regimens Lopez has been said to follow over the years. One of the most recent updates I could find was a November 2018 interview between the wellness website Lively and celebrity trainer David Kirsch, who frequently works with Lopez. The routine included three moves that target the butt and lower body — aka my least favorite areas to focus on.

Generally I pride myself on sculpting my biceps, back, and shoulder muscles, but if you’re going to train like J. Lo, you might as well focus on the booty, right? Plus, Kirsch was only prescribing a three-exercise sequence. How hard could it be? The answer: Hard. Like, really hard.

“You’ll feel it right away and will be sore the next day," Kirsch told Lively of his three-part regimen, which includes three sets of 10 platypus walks, 10 sumo lunge kicks, and 10 reverse crossover lunges. He also noted you could expect to see physical results within a month, but personally, I was more interested in noticing a change in how I felt rather than how much my booty would pop in my leggings. Here’s what stuck with me most during this time. 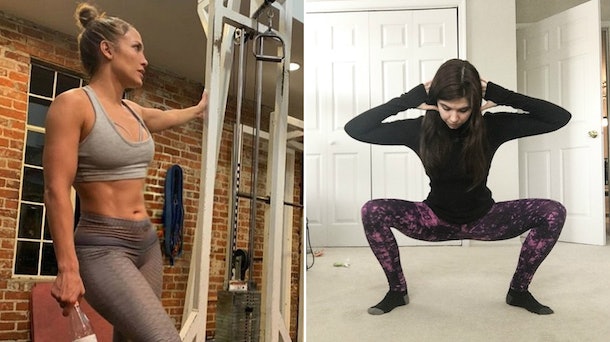 At first glance, the workout Kirsch designed for Lopez didn’t appear all that difficult, but the thing is, I don’t normally work combination moves into my own routines. So once I put these moves into practice — specifically the sumo lunge kicks, which require you to fluidly perform a roundabout movement with your leg, followed by a side kick into a lunge — I quickly realized I’d have to spend some time correcting my form.

Personally, I’m a visual learner, so to make sure I understood what each move entailed, where I should feel the stretch, and what level of soreness was to be expected the next day, I searched around YouTube for tutorials, and actually ended up on Kirsch’s channel for a play-by-play of the sumo lunge combination. If I hadn’t dedicated some of this extra time to my form, and if I’d only based my performance on a guess, not only would I not have gotten anything valuable from the workout itself, I also probably could have risked serious injury. Bottom line: Don’t forget about form, people. 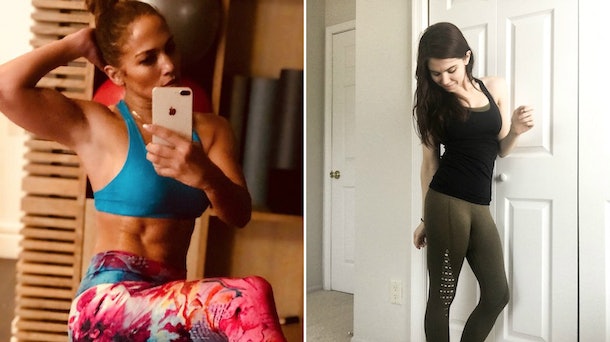 I loved @niyamasol’s post yesterday about judging less and loving more. My life and career are centered around my passions and doing things that make me happy. These are the latest from my Vanguard collection called Love?..if you can see they feature lyrics to On the Floor. We never quit, we never rest on the floor. Gettin it in today and everyday…get yours!!! ?? #jloxniyamasol – click the link in my story or bio to buy NOW!

Once I got the hang of each move, Kirsch’s routine only took me about 20 to 25 minutes with rests in between each set. It might not sound like a whole lot of time to dedicate to a workout, but if I’ve taken anything away from this experience, it’s that you don’t need to work out for an hour for your body to feel, well, worked.

“The key is less is more now, truncated workouts. The two hour workouts are gone,” Kirsch told Brit+Co back in May of 2018, adding that, when Lopez comes in for a session, it only lasts around 30 to 45 minutes tops. In other words, as long as you’re really putting in the effort, you’ll get out what you put into the exercises.

Don’t Judge A Workout By The Exercises It Entails 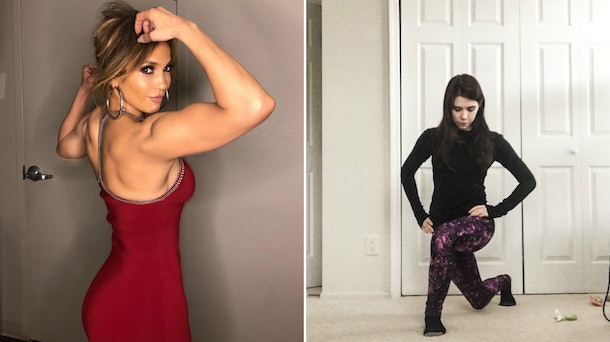 Feeling like superwoman after the show tonight! When I started this run I thought omg 15 shows in 27 days that’s a lot… but I made a promise to myself that instead of letting it wear me down I would be even stronger at the end of it…I will work out and be in the best shape of my life… There were moments I was tired and there was travel and I had to fit in my workouts where I could… but here we are with only 3 shows left!! And I am having so many emotions but mostly just feeling strong, happy and grateful!!! #allihavefinal15 #3showstogo #we’renotdoneyet #letsgoooo #makepromisestoyourselfandkeepthem @phvegas

Just as you shouldn’t judge a workout by how long it’ll take from start to finish, you definitely shouldn’t judge a routine based on the individual exercises it includes. That was my mistake here, and it’s a mistake I’ve made in the past. (See my experience trying Gal Gadot’s Wonder Woman workout, and Khloé Kardashian’s booty workout, for reference.)

Broken down one by one, some of the exercises in J. Lo’s butt workout might not sound all that difficult. Kirsch’s crossover reverse lunge, for example — which requires you to step back with one leg, so that you’re in a kneeling position with the back leg extended at an angle behind the opposite leg — is something I’m familiar with and have incorporated into my own routine plenty of times. But pair it with a few other moves that are relatively difficult, not to mention working many of the same muscles to their maximum potential, and the combination might just turn out to be more intense than you expected.

There’s More To Exercise Than The Physical Results 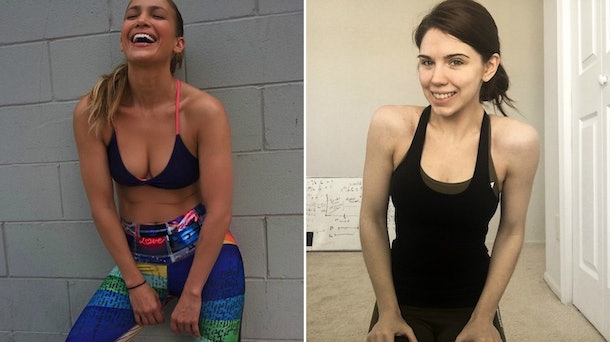 I know you guys have seen me living in my @Niyamasol leggings, I mean I wear them everywhere…LOL! Let me tell you why I have fallen in love…Niyama means positive habits for a healthy and spiritual way of life, values we can all stand by. Plus they're an entirely green company! Besides having the best fit out there, ALL of their clothing is made from recycled plastic!! ? SUPER COOL NEWS ALERT ?: When they heard about my MTV Video Vanguard award, they took my stan-dom to the NEXT level…so I’m so excited to announce TODAY they are dropping a tribute collection inspired by my music and career!! Jennifer Lopez X Niyamasol for YOU! ♥️ Every month through 2018 we will release a new design starting with the VANGUARD legging and matching top!! This company’s spirit and mantra touched my heart & soul and I can’t wait to see these on YOU, go to my stories and swipe up to see the entire collection and don’t forget to show me your #Mysolstyle #JLONiyamasol

I can honestly say this was the first time I went into a workout challenge without really thinking about physical results. This could be because I don’t have much of a butt to begin with, and I never have. Similar to how Lopez came to terms with the fact that she’s not, and never will conform to typical Hollywood beauty standards, I accepted my nonexistent bum years ago. Instead, I looked at this experiment as a chance for me to step outside my comfort zone and see how I felt after the fact.

Two weeks out, I do feel a bit more toned and tighter in the general booty area, but that really isn’t the point. By compiling just three challenging exercises into one workout, Lopez’s routine pushed my body to a new limit. Each day, I felt a little stronger (despite the fact that I was still breathing like a dehydrated puppy at the end of each round), and I can honestly say my legs feel stronger, too.

Don’t get me wrong: Jennifer Lopez looks amazing, but through this experience, I realized that I don’t have to look like Jenny from the Block to feel good in my own skin. It turns out, Julie from New Jersey is also pretty great, and she’s strong — stronger than she realized, and I have J. Lo and Kirsch to thank for that.