Anything you can do, I can do bleeding: it was the period ethos as ’90s as the Spice Girls, Impulse body spray and the Body Shop. But the women who came of age – and got their periods – in the ’90s and 2000s are increasingly looking beyond the old method of popping two Naprogesics and pushing through. Instead, they’re leaning into a very different way of managing their monthly bleed and hacking their whole cycle to make it work for them.

Cycle syncing is the practice of making lifestyle choices – from food to workouts, socialising to work projects – according to the phases of the menstrual cycle. First coined by Alisa Vitti in her book WomanCode, acolytes swear by its ability to make the ever-shifting cascade of hormones easier to manage and optimise their energy levels, focus and intuition. 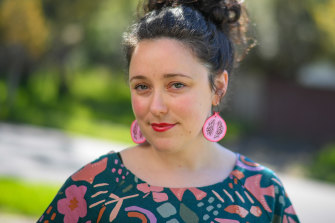 With some schools of cycle syncing (yes, there are books, podcasts, courses and coaches for this) using terms like, “inner spring” and “goddess season” it could be easy to dismiss this as just another woo-woo wellness trend. And yet, the science on which it’s based is solid: those who menstruate experience four phases of a cycle with distinct hormonal fluctuations that have researched effects on mood, energy levels, metabolism, sleep quality and even vulnerability to injuries.

There’s menstruation (phase one), followed by the follicular phase (phase two), ovulation (phase three), and finally the luteal phase (phase four). And while there’s not a lot of research on menstruation, we do know a fair bit: things like, in the follicular phase our memory and cognition is strong, during ovulation, hormones stimulate social and verbal centres of the brain regions, and in the luteal phase, the metabolism speeds up (and appetite increases).

Claire Baker has built a business around teaching women to work with their cycles, as a period coach. “I help women and people who menstruate work out how they can work with their cycle and not against it,” she says. “The story that we’ve been told is that men and women are the same and if you have a female body you’re expected to perform and relate to someone who’s on a completely different hormonal cycle to you.”

“The story that we’ve been told is that men and women are the same and if you have a female body you’re expected to perform and relate to someone who’s on a completely different hormonal cycle to you.”

And while some branches of cycle syncing can get complicated and lack the backing of science, Baker advocates starting with simple awareness.“Charting your cycle every single day is important, because it’s not easy to look back. Notice where the strengths and challenges are, and a pattern will emerge after about three months.”

There are a slew of apps to help with this, including Clue, MyFlo and Moody Month.

“Many women will experience low mood, anxiety, fatigue and low motivation in this time… This can be tough, especially as the demands and expectations of life don’t change to accommodate this,” she says, adding that if this is severe, it can be associated with pre-menstrual dysphoric disorder, which is a different story.

But rather than viewing the more difficult phases negatively, Hannam says it can be liberating to observe, accept and to ride it out knowing that it will pass, and in time give way to the energy and creativity of the oestrogen-dominant follicular phase.

It’s something Alexandra Abikhair, who works in academic administration at a university in Melbourne, has been doing in the years since she was diagnosed with endometriosis and adenomyosis. 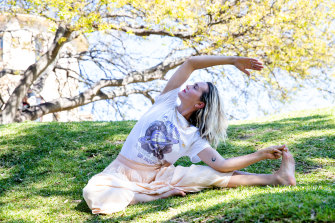 “I tracked to prepare for the pain, and then I started to observe what happened around my cycle,” the 33-year-old says. “I noticed things like the fact that in my pre-menstrual phase I’m really capable of making a decision, which is normally hard for me. Knowing my boundaries of capability and then retrofitting the world around that, what I can control at least, has really helped. Now, if I’m booking meetings in advance I’ll have a quick look at my chart and see if I can push it out a few days so it’s in my [follicular phase] so I’m more outgoing. Ovulation is when I’m able to give a bit more in terms of time and effort. [The luteal phase] is good for editing – I get into my inbox and tidy up, get into my to-do list and tick it off, clean out the fridge, meal prep for my period.”

She likens it to gardening. “I wouldn’t plant tomatoes in winter and expect them to flourish, so why would I catch up with a friend on day one or even day four of my cycle? It would just drain me, and in the past it has.”

Sydney yoga teacher and mother of three Monique Blackwell, 40, has been cycle syncing since she was first introduced to the concept of journaling her hormonal symptoms through the month at a women’s yoga course.

“I wouldn’t plant tomatoes in winter and expect them to flourish, so why would I catch up with a friend on day one or even day four of my cycle? It would just drain me, and in the past it has.”

“I started to notice patterns, and it made me realise that I didn’t have to be caught out by emotions anymore. I started looking at my calendar, and I’d be able to tell my husband that in the week coming I wouldn’t be myself, but this was why and I just needed some down time,” she says. “Now, on day one of my period, I sit down with a blank calendar and plan out my month ahead according to where my phases will fall. I’m not too rigid, but if a friend wanted to do dinner and drinks – in non-COVID times – while I’m in my luteal phase, I’d suggest coming over for a cup of tea or a meal instead.”

The power that comes with cycle knowledge is profound, says Melbourne-based cookbook author and mother of two, Jessica Prescott. As well as being able to pinpoint exactly why the way her husband wipes down a bench makes her want to scream at a certain point in the month, the 36-year-old has completely shifted her workout schedule since starting cycle syncing – HIIT only during her follicular phase, long walks during luteal and nothing at all during the first few days of her period. She says her energy levels, compared to when she was flogging herself at the gym all month, are much better, as is her mood.

There’s no doubt that cycle syncing takes time and effort. But for Prescott, it’s worth it. “It’s given me a deeper understanding of how I feel the way I do on any given day. Sometimes I have boundless energy and other times that energy is slow and steady and other times I’m consumed by thoughts of being horizontal. Now I know why, I don’t have to wonder what’s wrong – I know it’s actually very right. It’s a whole other level of being in tune with myself, and I feel so empowered.”