Prime Minister Scott Morrison has apologised to people in the flood-stricken Northern Rivers region as he offered tens of millions more in disaster assistance and moved to declare a national emergency.

He has promised governments will “pull out every stop and every resource” to meet community expectations about support as they recover from what he said was a one-in-500-year event. 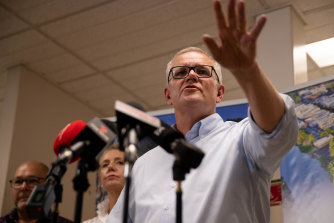 Prime Minister Scott Morrison addresses a press conference in Lismore about the flood catastrophe in the Northern Rivers region of NSW.Credit:Janie Barrett

Mr Morrison was met by climate change protesters in Lismore after he met with a local dairy farmer and SES volunteers when he visited the region on Wednesday, the first day out of his week-long COVID isolation.

Under the second support package he announced, disaster payments of $1000 per adult and $400 a child will continue for another two weeks in the Lismore, Richmond Valley and Clarence Valley local government areas for anyone who has already claimed the assistance. More council areas may be added.

There is also $31.2 million for immediate and longer-term mental health services and a further $10 million for a specialised program for school-aged children.

The federal and NSW governments will jointly fund a bespoke assistance package for dairy foods manufacturer Norco, which is a major employer in the region. Norco received almost $15 million from the federal government in 2018 to double the capacity of its Lismore ice cream factory.

But he acknowledged no amount of support governments could offer would be enough to deal with the suffering of people hit by a natural disaster.

“No amount of support is going to measure up to what people need in a desperate situation like this. I’m just being honest with you,” he said.

“Every federal government would always be apologetic, and would always apologise that you’re never going to be able to provide enough support in these situations… That’s why I do apologise.

“But I can tell you what, we’re going to pull out every stop and every resource to ensure that we meet it as we can.”

There has also been strong community anger about the level of help on offer from Defence personnel sent to the region. Locals and other volunteers with boats rescued hundreds of people stranded in the floodwaters.

Mr Morrison said it was “unrealistic” to expect the ADF could be poised to have its full resources ready to help out in disaster zones immediately when one occurred.

He said the height of the flood had taken everyone including the local community by surprise and noted Defence was in the region on Friday, before the waters rose on Sunday, and were using helicopters to rescue people off roofs on Monday. 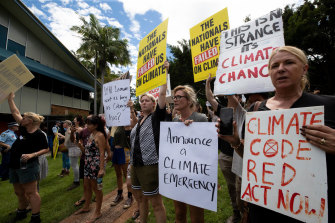 Protestors at the Lismore Council Chambers wait for the Prime Minister to arrive on Wednesday.Credit:Janie Barrett

By the end of Wednesday, the government anticipates there will be 4370 Defence personnel, mostly from the army, helping with the flood rescue and clean-up efforts. They have already rescued 113 people over 82 helicopter flights and made drops of food, water and supplies across NSW and Queensland.

More soldiers were leaving Darwin on Wednesday evening to help the recovery efforts.

“I think we have to be realistic that in any natural disaster, we don’t have those resources which has ADF [personnel] just waiting around the corner,” Mr Morrison said.

“I think always there will be a community response in disasters such as this because the community is already there.”

He said he understood people’s frustration, anger, disappointment and sense of abandonment, and spoke of the emotional meeting he had on Wednesday morning with a dairy farmer who had to bury 60 of his cows after the flood.

Deputy Prime Minister Barnaby Joyce told Sky News earlier he expected people in flooded areas would be angry at the government. He plans to visit northern NSW on Thursday.

“People are incredibly vulnerable and it’s understandable that they want to express the pain that they’re going through,” he said.

“I would be incredibly surprised if [leaders] got a happy reception because they’re not happy, they’re not in a happy place.”

Mr Morrison flagged further assistance, including promising the federal government would do everything it could to ensure flood mitigation measures were put in place.

“Australia is becoming a harder country to live in because of these natural disasters,” he said, when quizzed about the role of climate change.