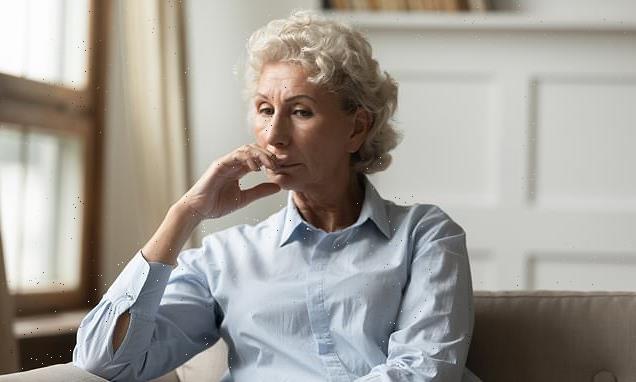 I resent my dog because she has become so aggressive I can’t see my grandchildren – should I have her put down?

A dog lover has revealed she has been left at a loss because her pup has become so aggressive that she is contemplating putting the dog down.

An unnamed British grandmother explained that she got a German Shepherd before the Covid-19 pandemic four years ago, and that the pet started to become aggressive from the age of six-months.

Despite consulting with six training experts and behaviourists, she told the online forum Mumsnet that she feels she can’t take her anywhere or have family visit.

After confessing she is thinking about having the dog put down, other users were quick to share their advice with the older woman. 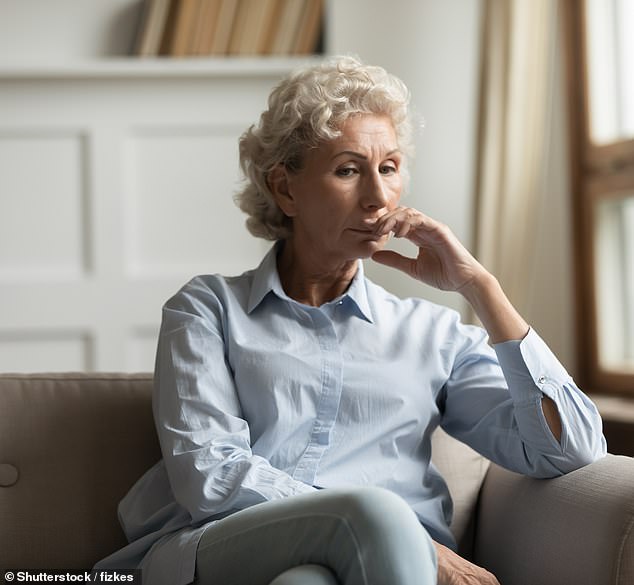 The woman explained that the dog was the breed she wanted, and that she was ‘perfect’ when she first got her.

She said: ‘Four years ago, I bought a puppy.

‘I did everything by the book, training classes, socialisation classes etc – she excelled in all her classes and she really was perfect.’

However she said that when the puppy reached six months old, she ‘changed’, adding: ‘She became dog reactive – no idea why as I’d socialised her so much (in hindsight, too much). 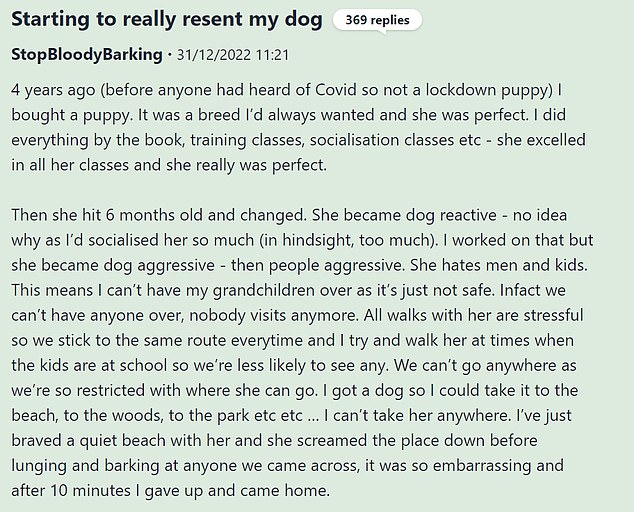 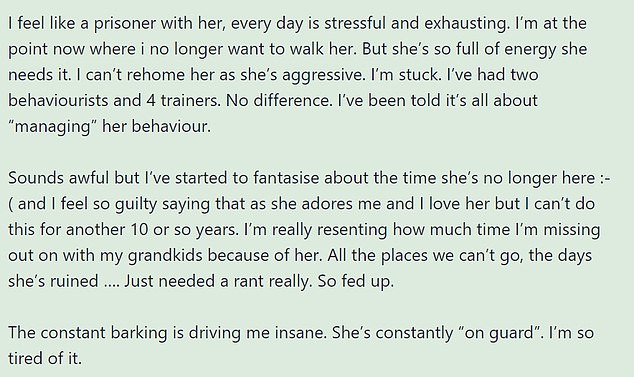 ‘I worked on that but she became dog aggressive – then people aggressive.’

The dog grew up to hate men and children, which means her owner cannot have her grandchildren over because she feels the situation is not safe.

Rachel Casey, Director of Canine Behaviour and Research at Dogs Trust, offered guidance on what should be the first steps to take when dealing with a dog who is aggressive.

She said: ‘It’s not uncommon that our beloved dogs can develop behaviours that we find to be a problem.

‘Although it sometimes seems that unwanted behaviours appear from nowhere, there is usually a reason from the dogs’ perspective.

‘The skill of a behaviourist is in putting themselves in the dogs’ paws to work out what has led to the change in behaviour,’ she added.

‘The first thing we recommend is checking with your vet, because sometimes a change in behaviour can be a sign that your dog is unwell or is in pain.

‘It’s important to rule these out or to ensure your dog is being treated accordingly. Your vet can then refer you to a qualified behaviourist,’ she said.

‘When seeking a behaviourist, ensure that they are registered with the Animal Behaviour and Training Council, that they have appropriate qualifications as well as experience, and use welfare compatible reward-based approaches.

‘Undesired behaviours are very common, and most owners need extra guidance and support at some point during their dog’s life.

‘We urge owners to get in touch with Dogs Trust on our Training and Behaviour helpline on 0303 003 6666 and we will do everything we can to help,’ she concluded.

She added: ‘Infact we can’t have anyone over, nobody visits anymore. All walks with her are stressful so we stick to the same route everytime and I try and walk her at times when the kids are at school so we’re less likely to see any.

‘We can’t go anywhere as we’re so restricted with where she can go.

‘I got a dog so I could take it to the beach, to the woods, to the park etc etc … I can’t take her anywhere.

‘I’ve just braved a quiet beach with her and she screamed the place down before lunging and barking at anyone we came across, it was so embarrassing and after 10 minutes I gave up and came home.’

She continued: ‘I feel like a prisoner with her, every day is stressful and exhausting.

‘I’m at the point now where I no longer want to walk her. But she’s so full of energy she needs it.

‘I can’t rehome her as she’s aggressive. I’m stuck.’

Meanwhile she added she has had a number of dog trainers, saying: ‘I’ve been told it’s all about “managing” her behaviour.

‘Sounds awful but I’ve started to fantasise about the time she’s no longer here.

‘I feel so guilty saying that as she adores me and I love her but I can’t do this for another 10 or so years.

‘I’m really resenting how much time I’m missing out on with my grandkids because of her.’

‘All the places we can’t go, the days she’s ruined …. Just needed a rant really. So fed up.’

She added that the ‘constant’ banking was driving her ‘insane’, finishing: ‘She’s constantly “on guard”. I’m so tired of it.’

Many people had a lot of sympathy for the woman’s story, advising talkinf to rehoming centres to see what they advise.

‘Unpopular opinion here but speak to a rehoming centre and see what they advise. They may say they will take her a few months down the line or may run behaviour management classes that can help you,’ one said.

‘Either way, how you’re currently living isn’t sustainable so it’s re-home or throw everything at her,’ they went on.

‘Nobody could blame you for feeling this way, it sounds awful. It also sounds like you have really tried to address the problems,’ another wrote.

‘I think what you’ve been told is correct, at this stage it is about accepting/living with her behaviour and trying as best you can to manage the triggers,’ they added.

‘You are right, rescues don’t take dogs with history of aggression. I would talk to the vets about quality of life,’ one said.

‘Just seen she’s a German shepherd, I know the police and military take in wayward reactive shepherds so a last ditch way to prevent putting her to sleep might be to see if they can take her,’ one suggested. 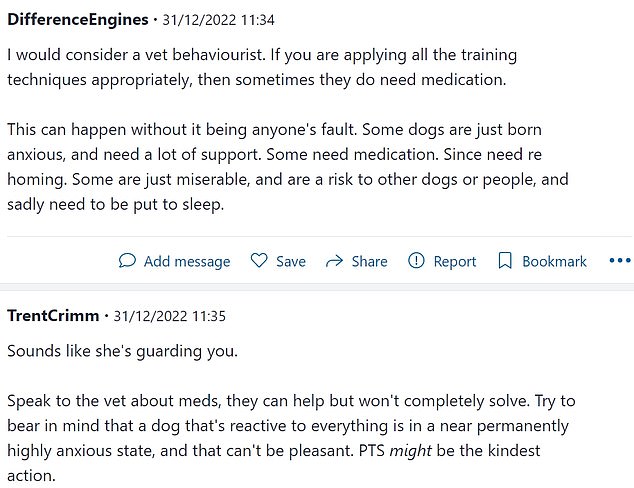 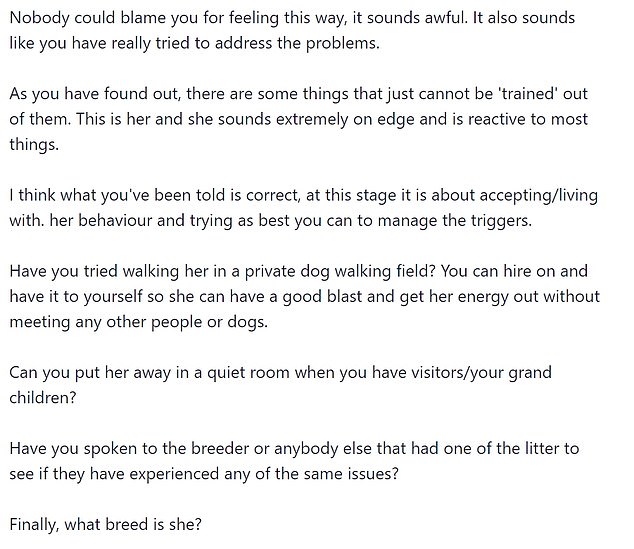 Some people suggested that the woman should speak to a rehoming centre for guidance, while others said she faced a very hard decision

However others confessed they felt the only option was to put the dog to sleep.

‘Don’t give her to a rescue. Face the end of the road, tell her you love her and take her on a one-way trip to the vets. It’s the right thing to do,’ one said.

‘You’ve done everything you can by the sounds of it, training etc, some dogs are just not cut out to be family pets. For your own sanity and family life you need to have her put to sleep if no one will take her.

‘Sounds heartless but you can’t live like this,’ another wrote.

Trainer reveals the one popular game you should NEVER play with your dog: ‘I beg of you, don’t do it’