Americana was born under a bad sign for Patty Griffin. ‘‘I never wanted that label,’’ she says. ‘‘I don’t like labels and most people don’t. I think it’s limiting. It’s a marketing technique, created by a bunch of managers in Nashville, Tennessee. I was there, scratching my head [asking] why are we doing this?’’

To sell product, is the crass answer that seems to account for a lot of curly questions in the world of music and elsewhere. And it worked. Packaging the immense, evolving American folk tradition with all its vast ethnic and geographic roots into one proud national brand paid off handsomely from the inception of the Americana Music Association in 1999.

But what happens when the pride of that nation begins to fracture and fade? It's a question the managers in Nashville probably didn’t see coming. If Americana is basically about telling a story of unity, the plot seems to have taken a dark twist. 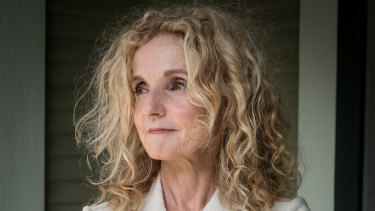 Patty Griffin: ”I was diagnosed with cancer in 2016, and that was when the election in our country happened.”Credit:Michael Wilson

‘‘We’re at a moment where we can no longer afford to pretend that we don’t know a lot of things,’’ says the folk singer from Old Town, Maine. ‘‘I mean, our pile is pretty huge right now because on top of the Earth and the environment we have an ancient system of racism here and a lot of history that hasn’t been written correctly.

‘‘It’s all come down on our heads, and to me it’s symbolised by one man and I can’t even say his name out loud because it upsets me.’’

Inevitably, we’ll get back to him. But the great reckoning of the past three years had a more personal dimension for Patty Griffin. ‘‘I always knew that I would beat breast cancer,’’ she says, ‘‘but the treatments were pretty depleting and they did a number on my voice and that was sort of the major trauma.’’

There’s no evidence of that trauma on her latest, self-titled album, her 10th since the gospel-infused Living With Ghosts announced her slightly delayed arrival in ’96 (that’s a story of corporate interference worth its weight in lessons learned). But the more deep-seated trauma of history weaves a raw seam through its grave and lovely songs. 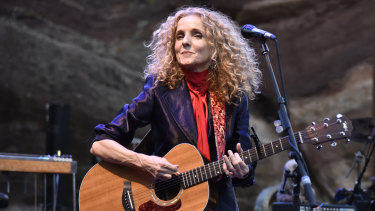 ‘‘To me, Mama’s Worried is nature,’’ she says of the plaintive opening track. ‘‘It’s the feminine, it’s Earth, it’s all women; everything. But I definitely used my mother in that picture because she was worried all the time. Worried about money and having enough for her children, keeping them warm.’’

The mother who bore seven children in seven years while singing over incessant laundry also hovers over another track that speaks of deep life reflection. Where I Come From refers to the town between two rivers on the far north-eastern tip of the US, surrounded by the French-Canadian country of Griffin’s maternal ancestors.

‘‘I realise now, looking back, that the town I was born in was dying all through my childhood, and I didn’t know that that was strange, because all over America, at least in the north-eastern part, the factories were all closing down.

‘‘There were two wool mills there, I think, and then two canoe factories, two paper pulp mills and things like that. And those factories employed Old Town. And at that point they were closing them down to go to the southern United States where labour was cheap and there were less unions.’’

The adult can join the dots to a modern era of even cheaper, offshore labour, and the kind of small town helplessness and unrest that welcomes a supposed saviour like the man who must not be named.

‘‘My mother’s family has been in that region for 400-something years, from Canada down into Maine,’’ Griffin says, ‘‘so it was my family home and it didn’t feel like home and I think, looking back on my childhood, it’s because there was a lot of rage in that town. It’s hard to figure out how to make a living doing anything — especially being a musician.’’

As she speaks, Griffin is backstage in a grand old theatre in a small town not too far from home, in upstate New York. The Troy Savings Bank Music Hall is a magnificent relic from 1870, ‘‘back in the days when banks said to themselves ‘Hey, we have a lot of money, let’s build the town a beautiful building all of its own.’ ’’ She allows herself a dry laugh. ‘‘Which is really stunning, when you think of the state of things now. Maybe we’ll get back there someday.’’

Maybe. Rivers and oceans are rife on Griffin’s new record. ‘‘Water moving. It symbolises change,’’ she says. One such ocean brings a familiar figure from folklore, Bluebeard, on a wave of Celtic folk that might have been chiming before the new world was named. Sadly, the murderous husband is just as timeless. But there’s something about the way this one meets his end that sounds like a revolution at last.

‘‘I think one of the more dangerous things that has happened, that is always happening, is people being passive,’’ Griffin says. ‘‘And we definitely have been passive in this country about a lot of things for way too long, and we’ve actually been discouraged from bothering with any of it.

‘‘I can speak as a female,’’ she says. ‘‘The women’s movement sort of took a plunge in the 1980s and it’s never really come back. Well, it’s just now starting to… and it took one of the Horsemen of the Apocalypse to get us to see that,’’ she says with a laugh.

She doesn’t mention any names. Ultimately, hers is a bigger story.

‘‘I was diagnosed with cancer in 2016, and that was when the election in our country happened,’’ she muses. ‘‘The older I get, the more I understand interwovenness and interconnectedness and I notice that when I sit and write about what’s inside of me, it’s very much parallel to what is happening outside of me. And I’ve heard a lot of other writers say that.’’