Federal Health Minister Greg Hunt says the bulk-billing fee doctors receive for administering COVID-19 vaccines will be three times what they are paid for flu vaccines, as some GPs complained the rollout would leave them out of pocket.

Mr Hunt announced on Sunday the vaccine rollout at 1000 general practices would begin the week of March 22, before expanding nationally to more than 4500 practices in April. 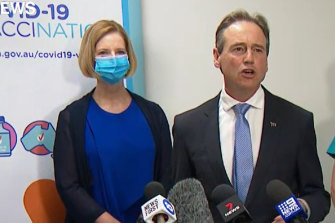 However, some GPs have raised concerns that the low rates of payment for the vaccinations and lower-than-expected initial dose allocations will make their participation uneconomical.

Mr Hunt, who received the AstraZeneca vaccine in Melbourne on Sunday alongside former Labor prime minister Julia Gillard, said doctors’ clinics were “not at all” expected to shoulder some costs of administering the vaccine.

“We’ve more than tripled the payments for the flu over the course of the two vaccinations and more than doubled the number of general practices we are accepting,” Mr Hunt said.

“So, in fact, there’s a very large payment the Commonwealth is making.”

The comments come after NSW Health Minister Brad Hazzard received numerous letters from GPs complaining about the process, with some reporting they’d been allocated 50 doses a week despite asking for 200 a day.

But Mr Hunt said the federal government’s approval of 4500 GP clinics to participate was “more than double our best expectations” and indicated doctors were committed to supporting the program.

Mr Hunt’s office said under the bulk-billing program, GPs would receive a $55-rebate for the first and second dose, and $65 when both doses were done at the same location. The GP rebate for the flu vaccine is $17.50. The initial phase of the rollout will be focused on vulnerable populations, such as older people and people with underlying medical conditions.

Dr Karen Price, president of the Royal Australian College of General Practitioners, said individual clinics would have to assess the business case for participating, and some may conclude it was not cost-effective.

She said some clinics would need to factor in additional expenses such as expanding their premises or hiring staff.

“For someone working in the inner city, they may not have the space, and so they may have to hire [extra space] or they may have to get an extra nurse in. That’s where doctors are having to think it through very carefully because you do have to run a pretty lean system to get mass vaccinations to work,” Dr Price said.

Australian Medical Association vice-president, Dr Chris Moy, said the program should not be seen as a “moneymaking exercise for doctors”.

“You have to remember, this is not like the flu vaccination. We are dealing with a multi dose rate which has complexity as well. Practices will have to get used to new systems in terms of providing the vaccine and that is one reason why there has been some level of concern about it,” Dr Moy told the ABC.

“But we’re just at the starting point and to some degree there will always be some reservations but the AMA have been working very hard to provide a level of support.”

Health Department secretary Brendan Murphy, who was also vaccinated on Sunday, said most of the population would receive the AstraZeneca vaccine and stressed it was as equally effective as the Pfizer vaccine.

“Some have got Pfizer, many will continue to get Pfizer. But there is nothing to distinguish between the two of them. They are both really, really good vaccines,” Dr Murphy said.

Senator Kristina Keneally, Labor’s spokesperson for Home Affairs and Government Accountability, said the Morrison government had “mismanaged” the vaccine rollout and the promise of four million Australians vaccinated by the end of March is “demonstrably not going to happen.”

”We have GPs saying they have no idea what’s happening, and they appear not to be trusting the government to manage the situation. There is nothing more important right now than getting this COVID vaccine rolled out,” Senator Keneally said.

Get our Coronavirus Update newsletter

Stay across the news you need to know related to the pandemic. Sent Monday and Thursday. Sign up here.