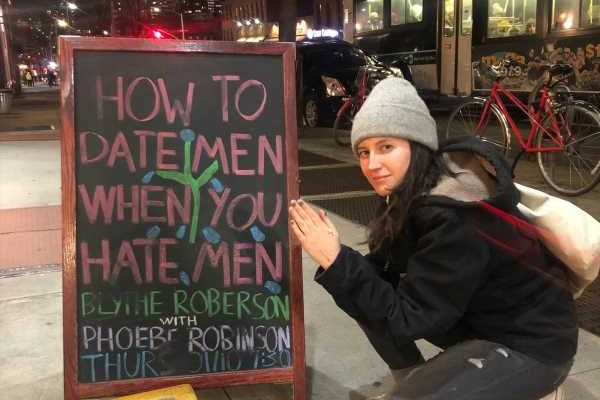 You’re sitting across from your crush in an urban-chic night-café (constructed out of an old shipping container), when he mentions his long-term girlfriend (who you’ve never previously heard of). You quickly realize that despite months of flirty texts, the literal paper notes you’ve exchanged, and all those times you were about to kiss — that you are *not* on a date. As you walk home (alone), you realize that you have enough stories about the frustration of men and romancé to fill a book — perhaps literally called: How To Date Men When You Hate Men.

Of course, a quick Google search will show you that comedic writer (and general icon), Blythe Roberson, has already beat you to it. And although you might be a bit upset that you didn’t come up with such a topical concept for a modern romance novel, worry not. We can all date men when we hate men, and we can get through it together.

I sat down with Roberson over breakfast to talk about the patriarchy, texting crushes, making art about the idiots who’ve caused you pain, and six life-changing tips on how to date men when you hate men.

1. You Don’t Hate "Men" — You Hate Systems Of Oppression 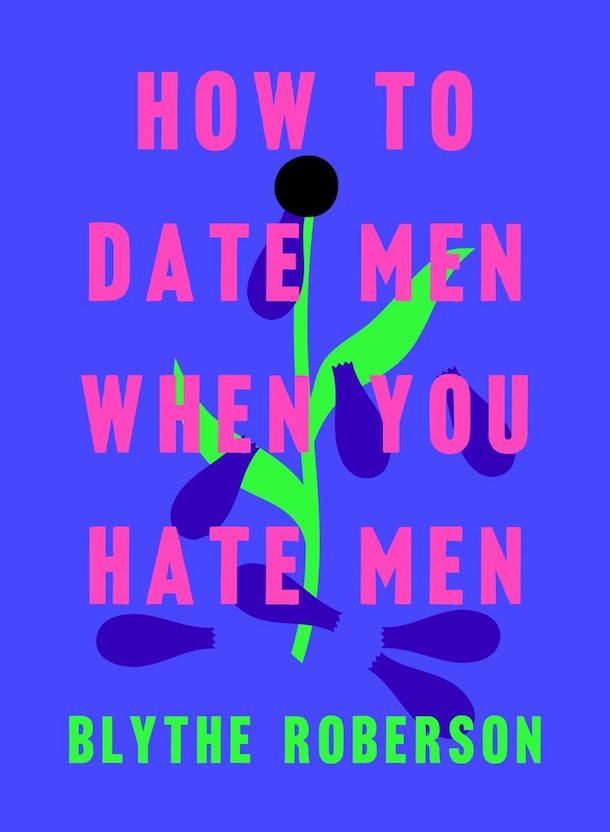 Of course, if you totally love your dad, brother, dog walker, barista, or heck, even your boyfriend (and anyone else in your life that identifies as a man), you may find the phrase "hate men" to be a little provocative. Rest assured, Roberson shares that dating men whilst hating men is less about literally hating individual men and more about working to dismantle the structural gender-based power imbalances within Western society.

"Since women didn’t have access to education, employment, birth control, ‘the franchise,’ they literally had to get married in order to enjoy luxuries like ‘food’ and ‘shelter,’" Roberson tells Elite Daily. "A lot of our pop culture, or culture as a whole, hasn’t caught up to the idea that women don’t need to structure their lives around dudes and romance. Not that romance isn’t lovely, it just shouldn’t be every woman’s job."

While the women’s movement has come a long way, there is still a lot of work to be done when it comes to gender equality, looking at intersectional issues, closing the gender pay gap, making abortion more accessible, and creating media that’s more representative of the way that real women live. Dating men while hating men means having a political awareness, doing your part to make social changes and being engaged in the causes that you care about.

Being socially aware or politically engaged in your dating life doesn’t mean you can’t have cis crushes or that you don’t think about men, ever. In fact, according to Roberson, dating men while hating men often means understanding the societal structures that have enabled women to think about men and dating a lot.

"We live in a patriarchal society where, for the past many many centuries, it was an economic necessity for women to structure their lives around men," Roberson says. "Because of all that, women are super socialized to think about dating all the time! So much of the entertainment that is aimed at women is about men, finding men, appealing to men, etc."

If your new crush is all you can think about or you’re drawing doodles of your boyfriend during your meeting — you’re no less of a feminist or a socially aware angel for thinking about men. But it can be helpful to spend a second thinking about why you’re thinking about men (#meta).

3. Analyze What You Want From What You’ve Been Taught To Want 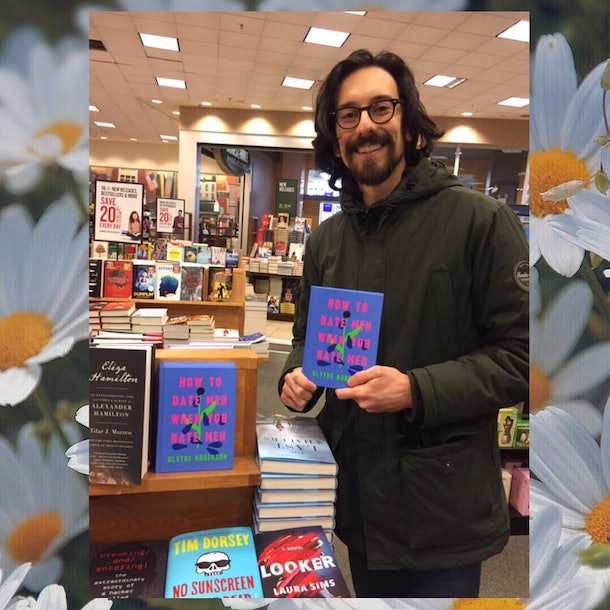 perhaps you thought the amount of hot men reading my book (in stores now) was finite??? but i assure you: it is not

It’s important to note that Roberson does not denounce or disapprove of consuming or enjoying romantic media. Her book contains endless references to romantic pop culture moments, and if you were just dumped, she would undoubtedly cancel her plans to watch You’ve Got Mail with you. Roberson solely underlines that her personal journey dating men while hating men means unpacking what she really wants from love and dating, from what she’s been told to want.

"I can only speak for myself here, but it’s very hard to excavate my own true desires from what I’ve been taught to want from movies, TV, women’s magazines, and the advice of every single girl I went to middle school with," Roberson says. "This will be a life’s work, I think!"

When it comes to dating men (or dating anyone of any gender), it can be super important to give yourself time and space to notice and understand what you want, outside of what you think others want for you. Regardless of your gender or preferences, the way you date doesn’t need to look any type of way to anyone else — it only needs to feel right for you. 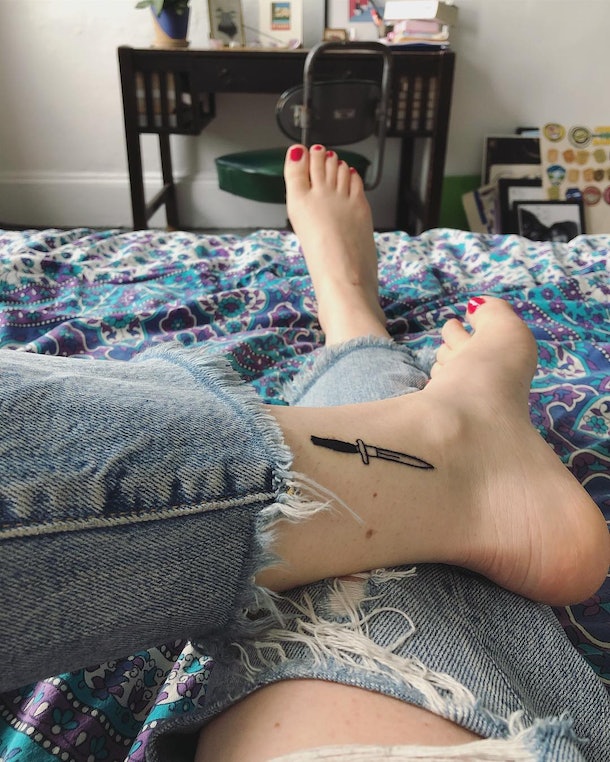 ?got matching How To Date Men When You Hate Men tattoos with @karalearota and @manadurphy ?? ?if you enjoyed the book to any extent know it would not have been possible without Dana, my brilliant and generous agent who helped me refine the idea over a YEAR and Kara, my editor who is a million times smarter than i am and who thankfully made me take most of the exclamation marks out of the book (can you believe there were more??!). from what i understand it is not normal to find editors and agents who will get matching book tattoos with you because most people have “professional boundaries” lol. i am so lucky to know these women and to get to work with them to bring art into the world!!! ?tattoo by talented, hilarious, stylish @st.kenia ?dagger because: when we were in the very early stages of figuring out the cover, it was a little more feminine and pastel and i, incapable of understanding shapes and colors, was just like “it needs more knives and blood.” months later when @na_son was designing the endpapers (swipe to see) she put actual knives and blood on them which is actually hilarious and made us all so so happy. ?sorry that there is a foot in this pic but i guess now there can be something when you google “blythe roberson feet”

A big part of dating men while hating men is learning to embrace the time you spend not dating anyone at all. It’s super important to normalize female singledom, women dating around, and ladies choosing to opt out of long-term romantic relationships, at whatever age.

"When you’re inside a giant societal trend, it can be hard to see that something big is happening and [easy to] instead feel like a disgusting goblin because you’ve failed to trap a man," Roberson says. "However: It’s normal. Women don’t have to structure their lives around men. A lot more women are single! It’s an actual thing that is happening."

If everyone around you is cuffed up, it can be easy to feel pressure to try and do the same. You do not need to feel any guilt for not having a partner. Love and romance is totally cool and can be an amazing thing, but so can being single, dating around, or swearing off romance and becoming a park ranger.

Dating men and hating men is less about creating "Rules For Dating" and more about noting some "Bigger Pictures Things You Might Want To Consider," when your crush left your last text on read and you were mulling over moving to Antigua. If you’re feeling down about dating or you’re worried you’re never going to find someone to take to family events, Roberson shares the importance of looking at romance from a global perspective.

As Roberson will attest, dating can be fun. Kissing new cuties, flirting with your friends, experiencing different (consensual) things that feel good — dating doesn’t need to be about finding a long-term partner to meet outdated societal ideals. It can be about enjoying the ride.

6. Make Art About Your Pain 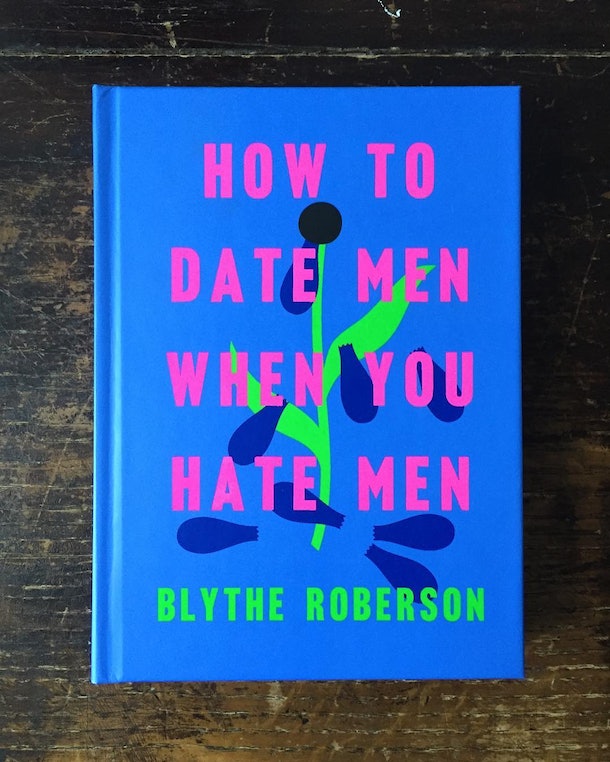 for my birthday @karalearota gave me a finished, hard-cover copy of my own book, which, through great force of self-control, i present to you here NOT filtered thru the Huji app! swipe for spine photo, all design glory to @na_son, book available now for preorder wherever books are sold

If along the way, some idiot man breaks your heart or you get completely blind-sighted by some jerk who didn’t treat you well — Roberson says that making art, writing about it, or even just sharing your experiences with friends can be super helpful in the healing process.

"A big benefit of writing is just getting my thoughts in order and figuring out the meaning of things that happen to me. And — I think I first saw Caitlin Moran point this out — that’s something that even people who aren’t ‘writers’ do, when they tell stories from their life to their friends," Roberson says. "There’s an actual psychology thing that telling a story multiple times helps crystalize the meaning of that event in your mind."

Even if you don’t fancy yourself an artiste, taking some time after a breakup, fight, or an otherwise undesirable encounter with a date, to express what you’re feeling or what you’ve been through can be super nourishing to your body and mind. If your relationship ended in confusion or a whole range of emotions, unpacking what happened and where your head is at can be a great tool in finding what you need to feel supported.

So, how can you date men when you hate men? By studying how systems of oppression were formed and understanding your role in dismantling them. By being aware of the media you’re consuming and making your own art about your experiences. Dating men while hating men isn’t really about men at all — it’s about you and doing whatever the heck you want. And that’s empowering AF.