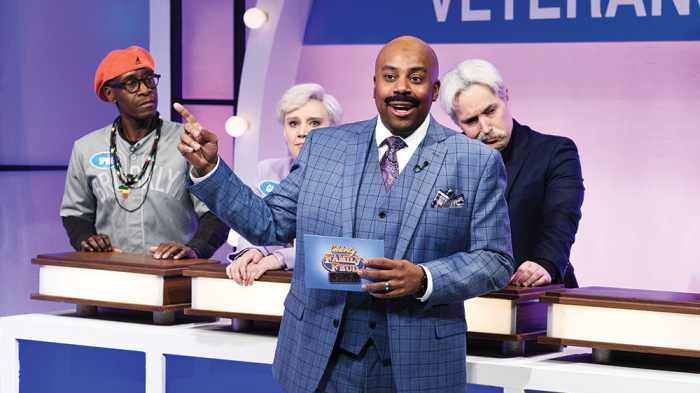 With four decades of transformative kids’ programming from such series as “All That” to “Blue’s Clues” to “Rugrats” under its belt, Nickelodeon has been responsible for inspiring new generations of Hollywood creatives.

For comic actor Kenan Thompson, it’s easy to see how Nickelodeon’s “All That” became a training ground for his work on NBC’s late-night, much more adult sketch comedy show “Saturday Night Live.”

“All That,” Thompson says, taught him “how to play to a four-camera setup and all that good stuff — going in and out of costumes and wigs, being patient putting makeup on and rehearsing all day.”

Meanwhile, “The Big Bang Theory” showrunner Steve Holland remembers being a fan of Nick’s “The Adventures of Pete & Pete” and “Ren & Stimpy” before getting his first job in TV as an intern at Nick’s former studio in Orlando, Fla. He also landed his first writing job on a Nick show (“All That”) and draws a thick line from that gig and his current one.

“I got brought onto ‘Big Bang’ by Steven Molaro, who [also] started at Nick. He’d done ‘The Amanda Show’ [and] ‘Drake & Josh,’” Holland says.

Holland says despite honing his chops on kids’ comedy, there really isn’t a distinction in the work, besides age of characters and partial sensibility in jokes. “It’s still sitting in a room with a script to write. And the Nick shows had much smaller staffs of people to do it with,” he says.

In addition to being a training ground, Holland says the Nick programs offered an opportunity to try fresh ideas: “They weren’t afraid to break the rules and do things that were different and weird. That was a good lesson to learn — to not be boxed in by rules of how a script has to unfold, so you can take chances.”

“Blue’s Clues” co-creator Angela Santomero notes that in updating the series as “Blue’s Clues & You” she’s found great support from one of the original show’s interns, Sarah Landy, who is now Nickelodeon senior vice president of production and development. “She’s running with ‘Blue’s Clues’ for the next generation and we’re like proud peacocks,” Santomero says.

Current “Double Dare” host Liza Koshy credits Nick shows she watched as a kid with helping her get her start on Vine and YouTube. “I grew up watching ‘All That,’ watching ‘The Amanda Show,’ so my humor, my timing, my comedy all came from watching the stars that I still love to this day, like Amanda Bynes, Josh Peck and Drake Bell,” Koshy says.

Executive vice president of Nickelodeon animation production and development Ramsey Naito recalls first seeing the network at age 12 in 1982 when her father got cable in New York City. Even though she was a little old for the shows on Nick at that point, she remembers being impressed with the network’s messaging that Nick was a place for kids only. She started her career working as a production assistant on “Rugrats” at Klasky Csupo. Now, decades later, she is involved with a “Rugrats” revival at Nickelodeon proper. She also produced the upcoming “SpongeBob SquarePants” theatrical movie.

“I feel a strong tie to the overall community of animation, but no question Nickelodeon has informed my love of animation. The majority of my work has been on Nick shows or Viacom shows,” says Naito, who also worked on Comedy Central’s long-running “South Park.” “What I loved about Nick, and I really have found this to be nowhere else, is it was creator-driven and artist-driven … a place artists could develop their ideas and be heard.”