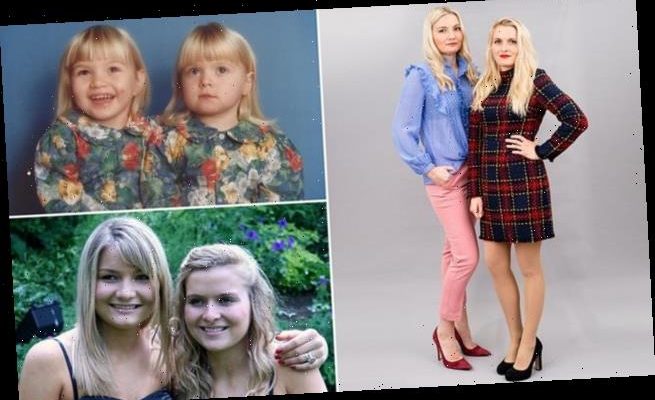 How my twin saved me from anorexia: Comparing herself to her slimmer, taller sibling drove Sam to starve herself. But it was the love of the same sister that finally cured her

Twins Charlotte and Samantha Crilly are as close as two grown-up sisters can be. Walking arm in arm, they exude happiness in one another’s company.

Nobody watching could possibly guess the pain underlying their unique bond — or how it all but destroyed their relationship.

While today they have the same huge smiles, blonde hair and confident air, their histories could not be more different.

Sam, 29, a writer and actor, is a recovered anorexic. Frightening new research shows a quarter of women aged 16 to 24 could have an eating disorder — and Sam’s own illness drove her to starve herself almost to death. At one stage in her teens, she was so dangerously emaciated you could see her heart beating through her chest. 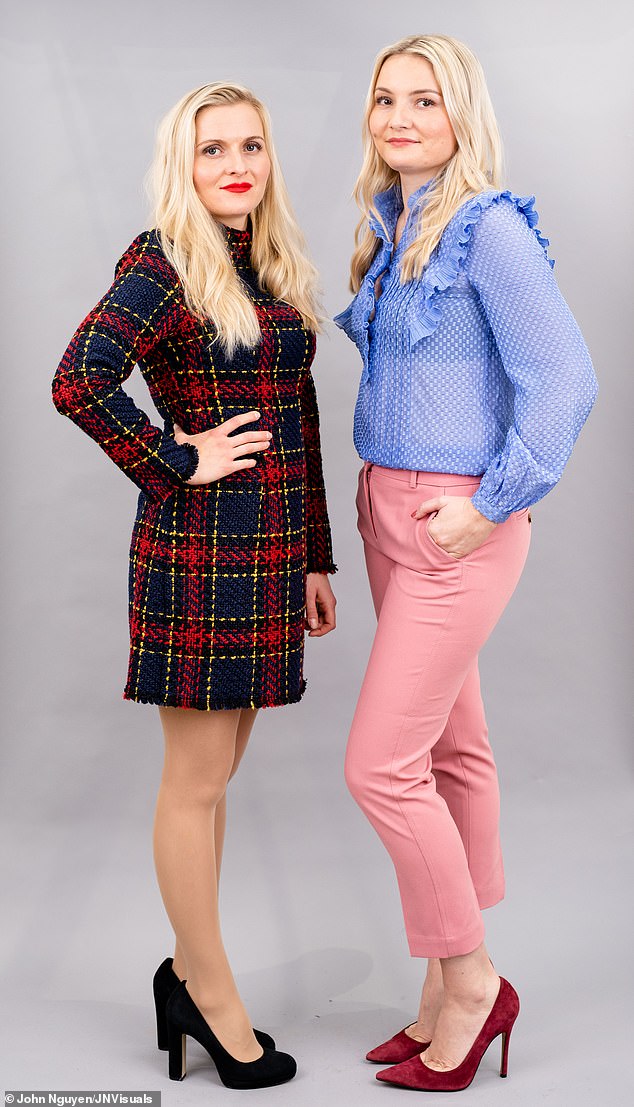 Samantha (left) and Charlotte (right) Crilly are twins and are extremely close, but their bond nearly broke their relationship

Meanwhile, Charlotte, a beauty therapist, has never had the slightest urge to diet unhealthily, but was forced to watch, baffled and scared, as her twin destroyed herself.

For years, it drove a devastating wedge between them and they barely spoke. Yet today, Sam is clear that one thing brought her back from the edge: her sister’s love.

Anorexia is a complex condition that attacks both the mind and body, meaning a full recovery like Sam’s is frighteningly rare; one recent study put the rate at around 21 per cent. It also has the highest mortality rate of any psychiatric disorder.

‘Charlotte saved me,’ says Sam quietly now. ‘When I realised what I was doing to her, I knew I had to find a way to stop. I wouldn’t have blamed her for walking away from me, and I will always feel guilty for what I put her through.’

The girls are lucky to have devoted parents — Lynn, 56, who has retrained as a counsellor since Sam’s illness, and Kevin, 61, a businessman. But from the moment they were born, two months premature in June 1991, they have been together. As infants, the only thing that soothed them was snuggling together in the same cot. 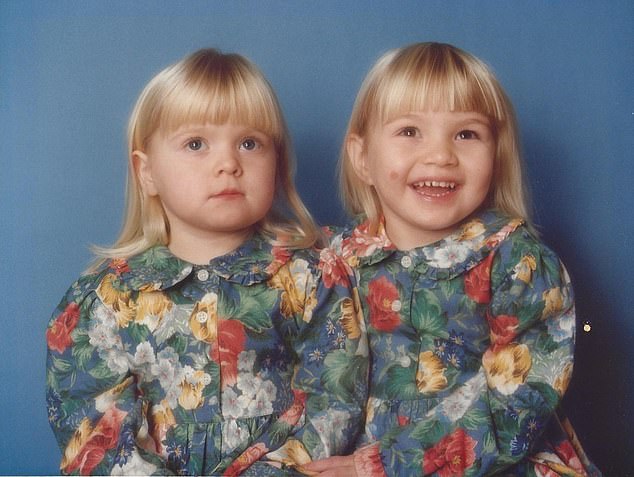 Sam, 29, a writer and actor, is a recovered anorexic who nearly drove herself to death by starving herself while dealing with the condition

‘We barely spent a second apart,’ recalls Charlotte, who married her boyfriend Callum, 29, an advertising account director, last year. ‘We had our own secret language and our own silly games. Sam was always the ringleader. I’ve always been happy to go along in her wake.’

It was Sam who suggested helping with the laundry by dunking dirty clothes in the loo. It was Sam who thought it would be fun to skid around the living room floor on their dad’s prized record collection.

When Charlotte badly cut her forehead, aged three, it was Sam she looked to as the doctor tended her wound. ‘I didn’t want Mum or Dad. I cried until Sam held my hand,’ she says.

So the girls found it hard when in September 2002, aged 11, they started secondary school near their home in Esher, Surrey, and were put in different classes.

They now believe this first separation sowed the seeds for Sam’s anorexia. 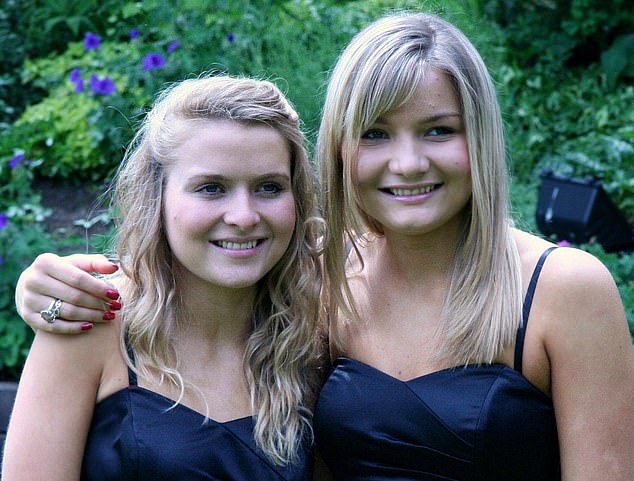 At one point when she was a teenager, Samantha was so emaciated that you could see her heart beating through her chest

Charlotte, the more academic of the two, settled easily. For Sam it was painfully difficult.

‘I desperately wanted to fit in, but I missed Charlotte,’ she says. ‘I felt adrift.’

There was another possible reason for her illness, though. The twins have different body shapes. Sam is a shapely 5ft 3in where Charlotte is a willowy 5ft 8in.

It’s bad enough having a taller, slimmer sister. But, when that sister is a twin, the sense of being endlessly compared and found wanting must be acute. Strangers had always felt free to comment.

‘When I was about ten, we were at a children’s party when a woman turned to Mum in my hearing and said: “They are so different. One is much fatter than the other.” I felt mortified,’ recalls Sam. 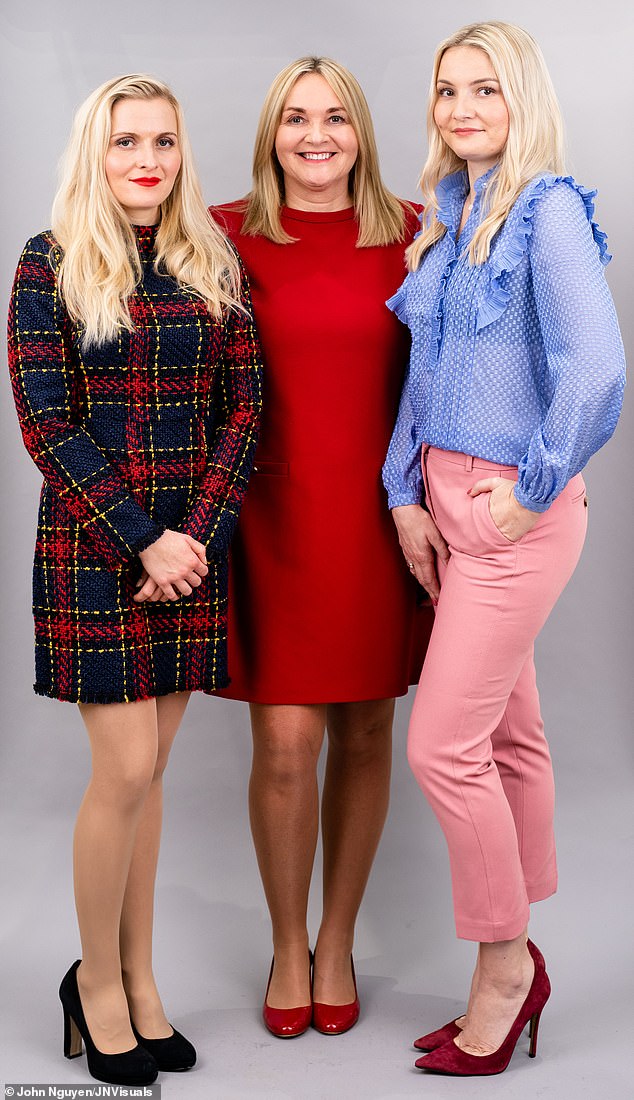 Then, aged 12, Sam got a tummy bug over the Christmas holidays and lost a lot of weight. When she returned to school, classmates complimented her on the change.

‘When I lost weight and people said how great I looked, it felt fantastic. Suddenly I found something I was good at.’

Sam started dieting deliberately — and gradually, it began to take over her life.

‘We met up every lunch break in school,’ recalls Charlotte. ‘I began to notice Sam throwing her packed lunch in the bin. At 12, I hadn’t even heard of anorexia. She was becoming more withdrawn. At night, instead of listening to music or watching Friends together, she would take herself off to her bedroom. I felt shut out.’

Meanwhile, Sam felt guilty for hurting Charlotte but didn’t know how to talk about what was happening. 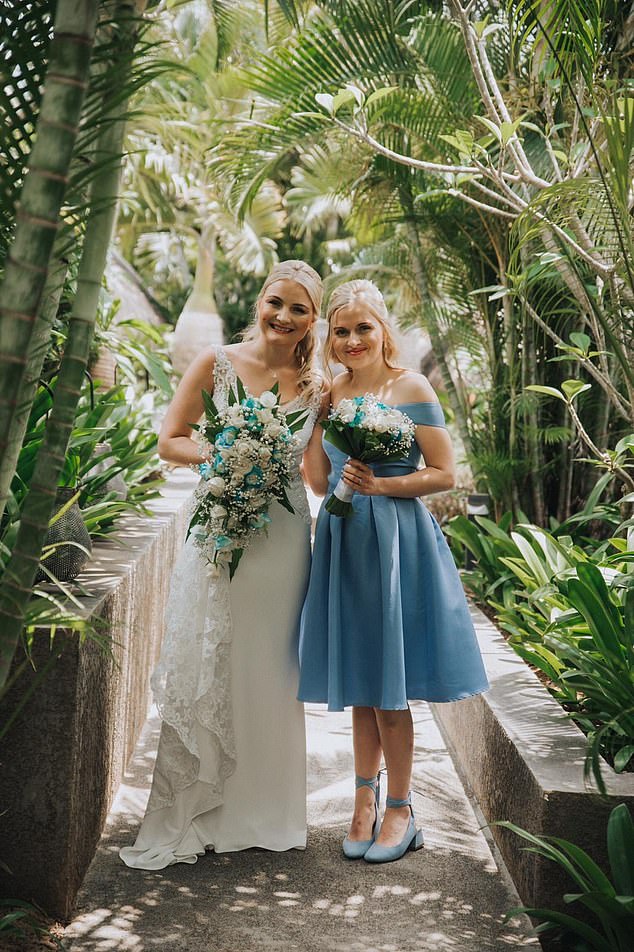 But when Lynn asked one day how they had enjoyed their lunch, and Sam glibly lied about the sandwiches she’d dumped in the bin, Charlotte knew she had to tell her mother what Sam was doing.

Lynn realised this was serious; but it was too late. By now, Sam was also skipping breakfast. ‘I felt my whole life depended on not eating,’ says Sam. ‘Anorexia became my personality. I didn’t know how I could exist without it.’

When Sam was 13, Lynn enlisted the support of their family doctor who offered counselling. But 30-minute sessions, twice a month, proved woefully inadequate.

The family arranged private sessions for Sam, spending more than £15,000 over three years on treatments, but Sam became increasingly ill. Her periods stopped, her skin became sallow, and soft down appeared on her face — all signs of starvation.

She was permanently cold, swaddling in layers of her dad’s jumpers, and often too ill to go to school, so teachers visited the house to give her lessons. 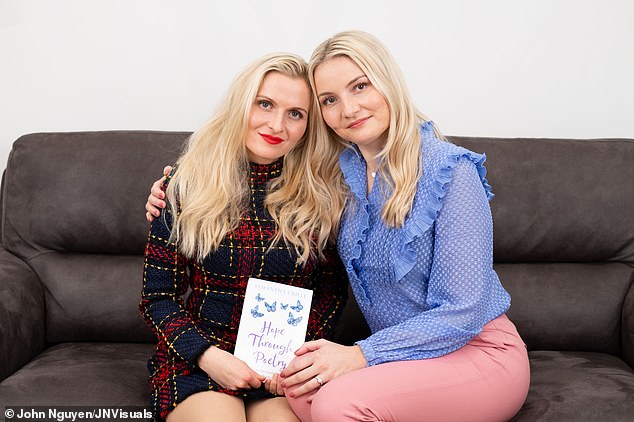 Lynn and Kevin were crazed with worry. But perhaps the biggest toll was on Charlotte.

‘I was in mourning for my other half,’ she says quietly. ‘I felt Sam had been taken over by this demon. I would get her to watch Friends like in the old days, but her eyes glazed over and she wouldn’t laugh at the jokes.’

‘Anorexia turned me into a complete monster,’ says Sam. ‘It was like being brainwashed. I loved Charlotte but I was trapped behind this wall. I was so thin I could actually see my heart beating through my skin. Lying in bed hurt, because my bones rubbed on my mattress. Even so, I was convinced that my life depended on not eating.’

By August 2007, the entire family was at rock bottom when they went on holiday to their second home in Spain. There were constant rows over food. Lost in her own terrible thoughts, Sam hunkered in her darkened room. Terrified her daughter would starve herself to death, Lynn was at the end of her tether. Finally she told Sam she didn’t know how she could help her any longer.

Sobbing in her room, Sam looked out into the garden and saw Charlotte swimming in their pool. It was a pivotal point. 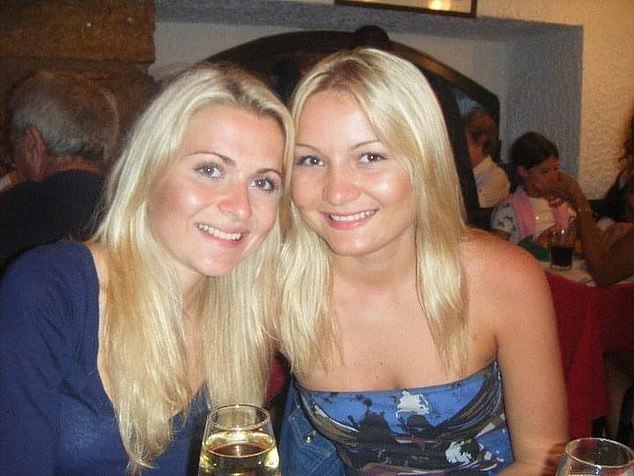 ‘Charlotte should have been so happy. Instead, she looked miserable and lonely,’ says Sam. ‘I had this sudden flashback to before it all started. We both adored swimming and spent every second we could in the water, larking about.

‘I wanted that back. I wanted with all my heart to be with Charlotte again. She was in pain and I was causing it.’

After almost five years of the illness, it took enormous willpower for Sam to fight back.

‘It was so hard ignoring the voice in my head telling me not to eat,’ says Sam. ‘Charlotte sat beside me at every meal time, telling me it would be all right.

‘My body was so unused to food, I would often be in pain after a meal. Charlotte would rub my tummy and comfort me.’

‘I watched her eat proper portions and she was so beautiful and healthy. I realised I could be the same. She was the reason I was able to make myself eat again.’

That Christmas the family went to Tobago. The twins bought matching black bikinis, ran along the beach hand-in-hand and splashed in the sea.

‘Gaining weight seemed terrifying,’ says Sam. ‘But I had Charlotte’s example. If she looked slim in her bikini, I knew I must, too.’

When the girls were able to swap clothes for the first time, they danced around the room in excitement, and when Sam’s periods started again in her late teens the family broke out champagne.

Aged 18, she was well enough to take an acting course followed by a degree in Stage and Media Studies. Charlotte, meanwhile, has trained as a beauty therapist and plans to branch into counselling.

Sam is convinced she will never be sucked back into the hell of anorexia — with her sister’s help. ‘I know it’s a long road,’ she says. ‘But having Charlotte’s love and support makes all the difference. When I was ill I couldn’t see how much she loved me. That will never happen again.’

Last November, Charlotte and Callum wed after moving into their own home in Kingston, Surrey. Sam lives a stone’s throw away.

Sam knows she is very lucky to have been left with no long-term health problems. She is also acutely aware of how much she owes Charlotte.

‘We were having dinner in a restaurant a few weeks ago,’ she says. ‘We’d been shopping and were laughing. I caught the waitress’s eye and she had this lovely, indulgent smile on her face. She had picked up on our happiness.

‘I’m so lucky to have Charlotte. She gave me a second chance that not everyone gets.’

Hope Through Poetry by Samantha Crilly is published by Hammersmith Health Books at £14.99. Samantha and Charlotte Crilly host the Hope With Mental Health YouTube channel.

For help and advice, contact Beat Eating Disorders on 0808 8010677 or go to beateatingdisorders.org.uk