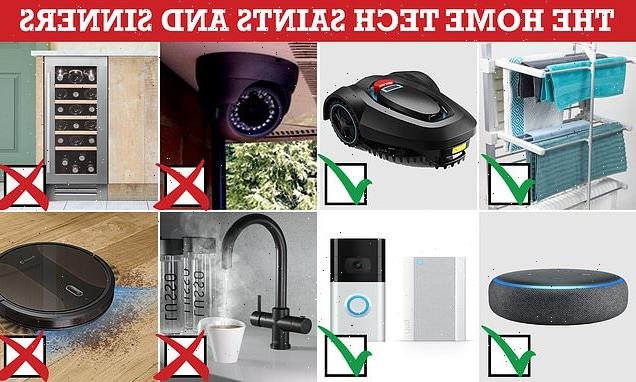 Technology has infiltrated our homes in ways that might have seemed futuristic even just a decade ago, with digital doorbells, smart washing machines and robot hoovers all making busy lives a little easier.

Indeed, middle class households might switch on the lights or music with their voice, have boiling or sparkling water dispensed via a tap, and put their feet up and relax while a robot lawnmower gets to work on the garden.

But how do you square the endless list of life-enhancing appliances – from wine fridges to underfloor heating to motion sensor bins – with soaring energy prices?

Ben Gallizzi, energy expert at Uswitch.com, says developments in technology have seen more clever appliances than ever in our homes, but running costs could add up, saying: ‘We have become reliant on our gadgets, but as energy prices increase we need to think about the cost and how we can use them efficiently.’

The new cap on energy prices came into force at the weekend and as households are preparing to watch their energy use more closely, FEMAIL looks at how cost-effective the tech-focused home appliances making our domestic lives run more smoothly actually are: 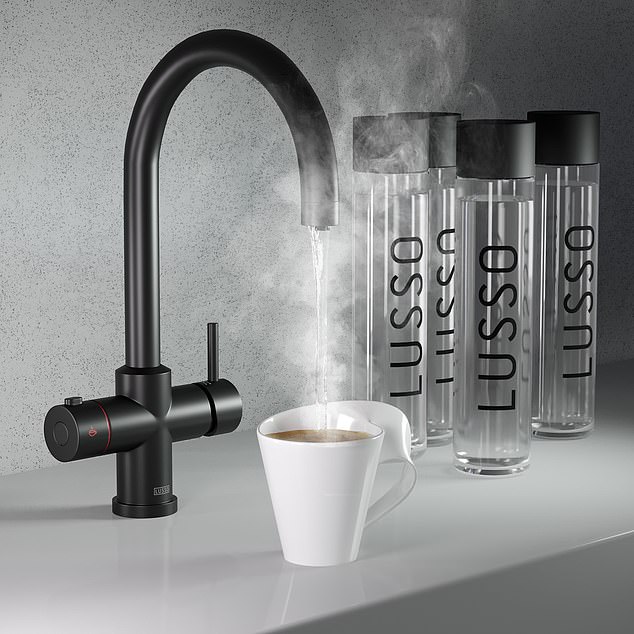 Hot taps offering instant boiling water is replacing the kettle in many households, retailing from around £299, but it’s worth bearing in mind that the mini-boiler under your sink that they connect to is usually on permanently

Taps that dispense iced, sparkling and boiling water have become increasingly commonplace in households in the last decade, with families ditching the traditional kettle in favour of the space-saving device.

Brands such as Quooker, Qettle, Grohe and Fohen lead the market, with the cheapest taps retailing from around £299 for a basic model, and rising to over £1,000 if you want chilled, sparkling and boiling water. While competent DIYers could have a go at fitting them, most people will require a plumber to do it.

The taps come with their own mini-boiler, which sits under the sink – and is permanently switched on to keep the water hot when you need it.

After the initial outlay – significantly more expensive than a basic kettle – how do they compare? It really depends on how much tea you drink, says energy expert Gallizzi.

He explains: ‘Whether your kettle or hot water tap is more energy efficient will depend on how many cups of tea you make.

‘If you only make occasional teas or coffees, your kettle might work out cheaper to run. If you are regularly boiling water then a tap could be more efficient.

‘And If you are using a kettle, you can save money by only filling it up with the amount of water you need for the number of drinks you are making.’ 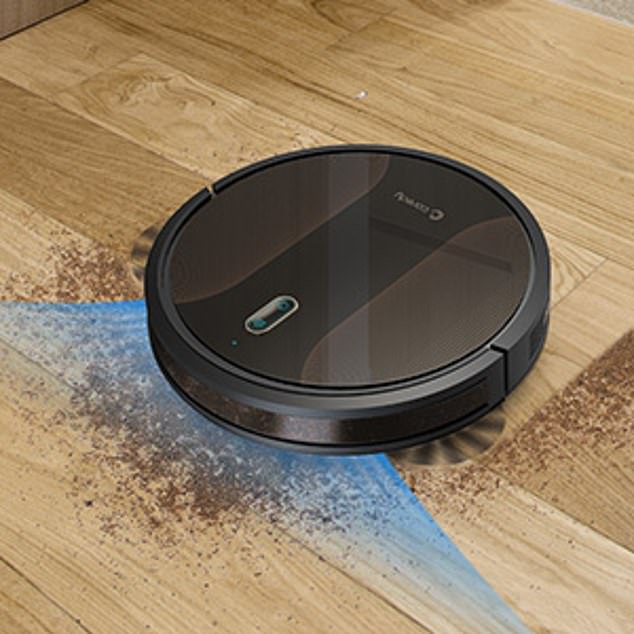 Save time, and your own energy, using a robotic vacuum cleaner – but bear in mind, they use roughly the same amount of energy as a normal hoover, plus additional charging energy when not in use

You could be on a beach in Spain and effectively clean your floors at home via wi-fi from your phone. But does such convenience come at a price when it comes to energy bills?

It’s worth bearing in mind too that most robot hoovers can only do hard floors really well, although the market is evolving all the time as their popularity soars. Market leaders such as eufy start from around £189…but Aldi recently launched their version for £99.

Robot Hoovers find their way back to a charging block when they need a boost, but, just like the mini-boiler for hot taps, this is likely to always be on.

When they’re actually in use, says Gallizzi, they use about the same energy as a normal vacuum cleaner – 60W – so cleaning for 90 minutes would cost around 2.6p in energy.

Says our expert: ‘A standard vacuum cleaner used for 90 minutes would cost the same amount – but you would probably be able to hoover your whole house in that time, while the robot may not cover as much distance.’ 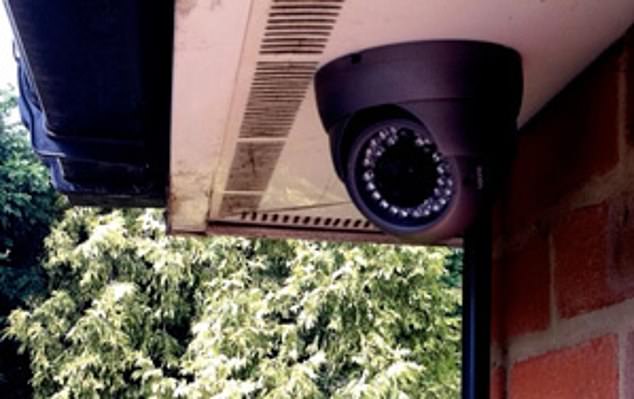 What price on security? A five-camera CCTV system for your home could cost up around £223 a year to run, says our expert

Forget grainy imagery, technology leaps mean that you can now watch your cat clamber the fence, or anyone else, in full technicolour. Again, after purchasing one – prices start at around just £50 for a one-camera set up – there are charging costs, which can stack up.

‘Modern CCTV cameras consume very little power, but you need to include the costs of the whole system,’ says our expert.

‘If you have five 7W cameras connected to a 40W digital recorder, the system is using 75W in total, which will cost just over three pence per hour.

‘While this might not sound like much, you have to remember that your system will likely be running around the clock, meaning it could cost £223 a year.’

Whatever you call yours, the chances are you’ve got more than used to picking up delivery notifications, calling family members and playing your favourite tunes just by using your voice.

And the good news is, devices such as Alexa (Amazon) and Google Home, are inexpensive to run – less than 10p a day, around £36.50 a year. 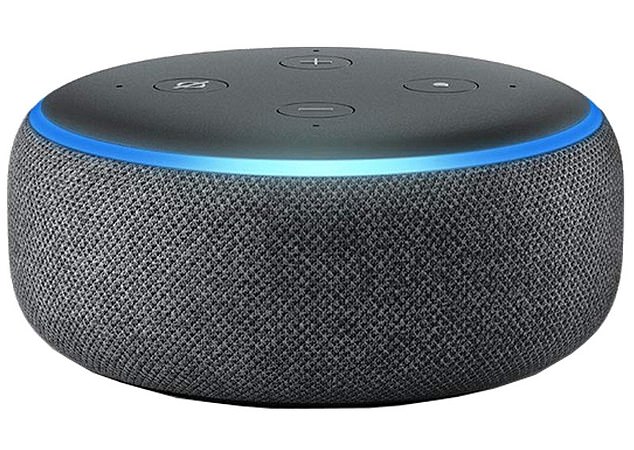 Voice-activated assistants, such as Alexa from Amazon, are inexpensive to run – costing just 10p a day 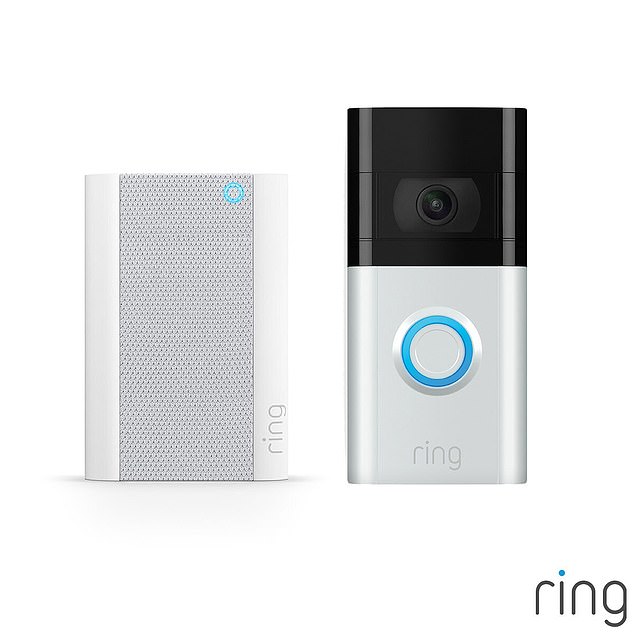 An energy bargain: Digital doorbells are inexpensive to buy, at around £30, and cost just 6p a week to permanently have on

Smart doorbells that include live video pictures from outside your front door have become a best-seller over the last few years – offering homeowners the chance to not only see who’s at their own front door, but also speak directly to those who might be outside the home of an elderly relative.

Ring, Google and eufy are market leaders, and you can pick up a digital doorbell from around £30, so the outlay isn’t huge.

Says Gallizzi: ‘When in standby mode, Ring doorbells use just 1.2 watts of power. Left on standby for 24 hours a day for a week, it could cost households around 6p and  £3.64 over a year.’ 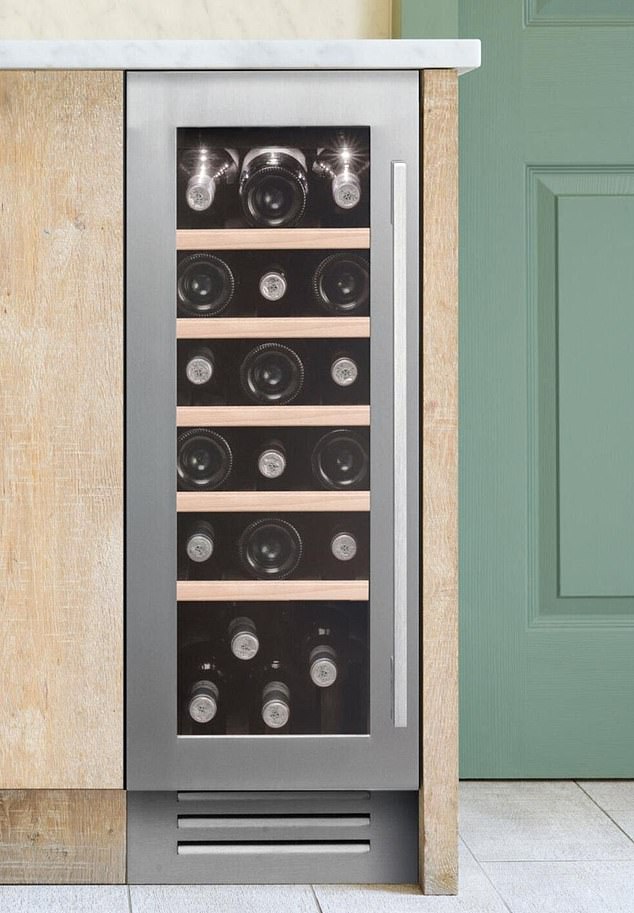 Use your wine cooler fridge like a storage unit – only switching the fridge on when you know you definitely need chilled drinks, and you could save on running costs

Averaging around £200 for a mid-range model, wine cooler fridges add a little luxe to modern kitchens; pulling an ice-cold Chablis out of the fridge on a Friday night certainly feels like a treat. However, if you don’t permanently have a wine fridge on, it could actually be fairly reasonable to run.

‘Running a wine fridge would cost £44 over a year. However, unlike your normal fridge where you store your food, you do not necessarily need to keep it running all year.

‘If you are trying to save money, you could keep a bottle or two in your regular fridge, and only turn the wine fridge on for sociable occasions.’ 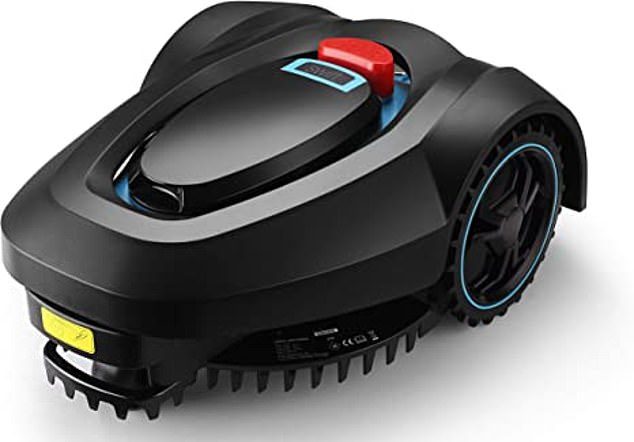 Still expensive to buy, at around £400 plus for a decent model, robot lawnmowers are impressive with their energy use, at just 2p an hour

A million miles more eco friendly than an old-school petrol lawnmower, and you don’t have to do any of the legwork.

Still relatively new to the market but increasing in popularity, robot lawnmowers have yet to really come down in price, with the best performing models easily over £400 to buy.

However, when they’re zipping around your garden, these grass trimmers, usually around 50W – really don’t cost much to use, less than two pence an hour. That’s around £1 a year if you use them every week…which nobody would, although the charging station will add additional costs to that. 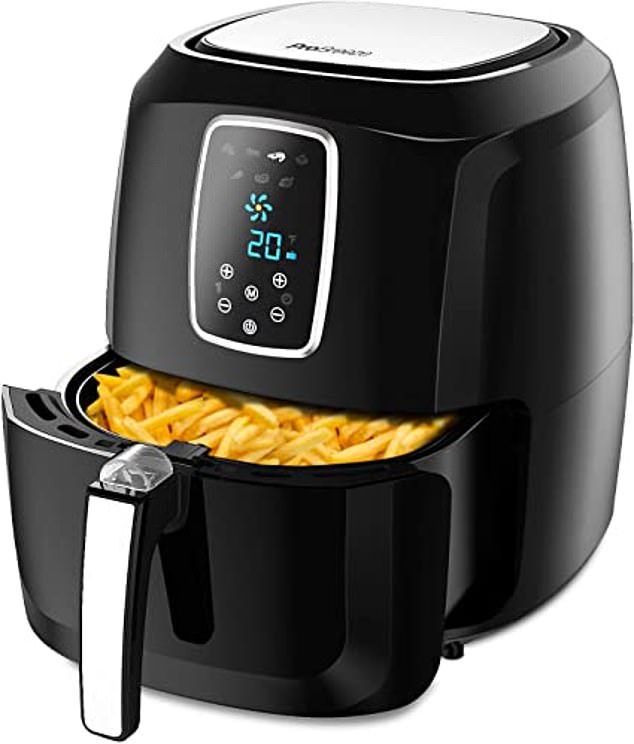 Effectively a small oven, air fryers circulate 200-degree heat around its compact cooking chamber, making it easier to cook things more quickly, meaning you don’t need to use them for as long as a conventional oven, saving money

The compact kitchen appliance, which retails at anywhere between around £40 and £400 works by baking food place into its basket at a high temperature – usually 200 degrees – with a high-powered fan circulating the heat.

Gallizzi says: ‘Cooking in a conventional oven is one of the most common ways to prepare dinner, but it is often more expensive to run than other kitchen appliances.

‘Ovens are usually large enough to cook multiple dishes at the same time, so there’s a lot of energy being wasted if you’re only cooking on one shelf.

‘Air fryers are much more efficient as they tend to be smaller than ovens, and their quicker cooking time means they use less energy overall.

As a general rule, when cooking a meal in an air fryer, you can halve the time you would typically use in an oven. Similarly, microwaves cook much faster than an oven and so use far less energy and will save you money.’

THE BANGER TEST: COOKING SAUSAGES IN AN AIR FRYER VS AN OVEN

Source: Uswitch.com. Cost of electricity based on current price cap 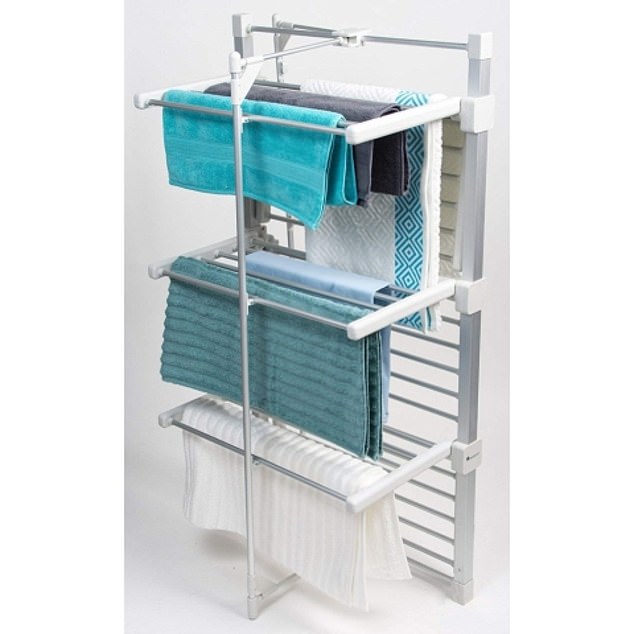 Invest in a heated clothes rack, around £50, and you could save £84 a year on tumble dryer costs

Laundry is likely where you’ll rack up the biggest energy costs in the home.

Says our expert: ‘Tumble dryers and washing machines are among the biggest energy guzzling appliances in your home.

‘It is recommended that you only run them when they are full, to cut down the number of washes you are doing a week.

‘You can also save up to a third of your washing machine energy costs by washing clothes at 30 degrees.’

If the tumble dryer is an energy sinner, and the washing line is an energy saint, then the heated clothing rack is somewhere in between.

They cost around £50 to buy on Amazon and use around 300W, working by pushing hot air through the rack to dry garments laid across them.

‘Heated airers are drying racks with a heating element that helps speed up the process.

They typically use 300W, which will cost 20 pence if used for two hours per load of washing, and adds up to a £84 saving compared to relying on a tumble dryer.’ 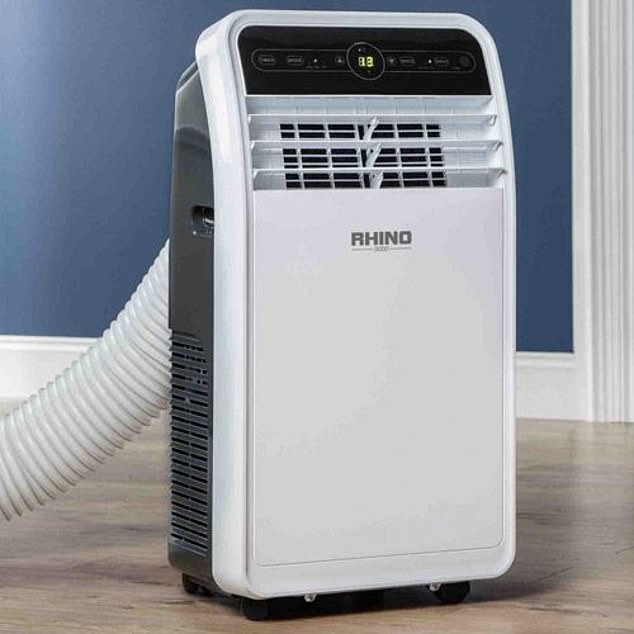 While no-one is reaching for their home cooling systems right now, a word of warning ahead of next year, they can put a huge dent in your wallet, particularly if you rely on them all night long.

While no-one is reaching for their home cooling systems right now, a word of warning ahead of next year, they can put a huge dent in your wallet, particularly if you rely on them all night long.

Typical air conditioning units use 2.7kW, making them around £1 an hour to run – that’s £8 a night, which soon adds up when you have a long, hot summer.