“All you could hear was each other crying.”

Kris Jenner has opened up about watching the hologram video of her late ex-husband Robert Kardashian.

While appearing on Andy Cohen’s Sirus XM radio show “Radio Andy” on Monday, the “Keeping Up with the Kardashians” star shared her thoughts on Kim Kardashian’s 40th birthday present from Kanye West, calling the gift “one of the most incredible things” she’s ever seen. 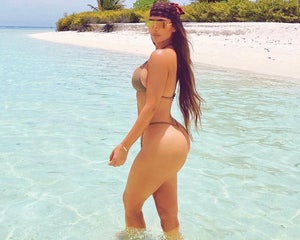 “You know, we didn’t really know what was happening because it was such a small group of Kim’s inner circle, just our family and a few friends,” Kris began. “And when we were summoned to this room and said you know, ‘Kanye has a gift’ and it’s Kim and me and her sisters and her brother, I didn’t know what was happening.”

“It was a very dark room and we sat down,” she continued. “It started and we just all started to cry. It was, you know intense, but I must have watched it 20 times. It was just, it was really good. It was, he is the king of gifts and, and he worked on that for a really long time. So it was definitely one of the most incredible things I’ve ever seen. It was really wild.”

After watching the hologram video for the first time, the momager said it was “very quiet” in the room and the family was “in tears.”

The reality star said the “first thing” the group wanted to do was immediately watch it again. While friends and family were invited to come watch the hologram, Kris admitted she needed a moment to herself.

“I literally had to go back to my room and just sit there because I needed to digest that,” she told Andy. “It was intense, and it was a beautiful, beautiful moment, so I just wanted to kind of enjoy that.”

When Andy asked Kris about her thoughts on the “assholes” who criticized Kanye’s extravagant gift after Kim shared it on social meida, Kris said, “Listen Andy, we learned a long time ago to have thick skin and you can’t really worry about people that are hating all the time and so miserable and feel the need to reach out and say ugly things.”

“Just either enjoy it and appreciate the moment or, you know, don’t. We just can’t get into, you know, who’s thinking what.”

Robert Kardashian passed away in 2003 after battling cancer.