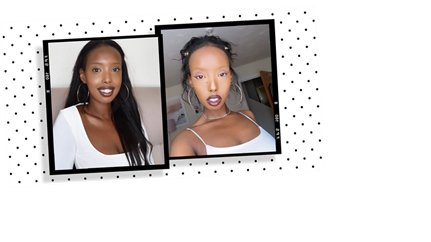 When she started dating, one writer couldn’t help but notice that men seemed to take an unusual interest in her hair. Here’s how she dealt with the constant comments and came to a realisation about her relationship with her hair.

People are always telling me that I looked like Toni (Jill Marie Jones) on the popular Netflix comedy Girlfriends.

“She’s beautiful,” they would coo, “just like you!” Excited to meet my doppelganger, I watched the show.

And while Toni and I did look a little alike, it was the similarities in our love lives that I noticed more.

In one particular scene, she was dating a white congressman and, during their first night together, he remained fixated on her hair. He woke her up as she slept when trying look more closely under her weave. “Wow,” he said, “it’s done so well!”

At the time I watched with a grimace on my face. “It’s none of his concern,” I remember muttering under my breath. It bothered me because it hit a bit too close to home.

Throughout my whole life I have been made distinctly aware of the relationship Black women have with their hair, but also how the rest of the world reacts to how I look.

The first time I noticed other people’s obsession was when I started dating. I have naturally curly 2b/3c hair and I realised from my late teens that the type of man I attracted was very dependent on the way I wore my hair.

Curly hair meant that I was more likely to attract the alternative, indie boys – someone a little more ‘edgy’. If I picked up the straighteners that morning, I’d receive attention from Essex Boys and bankers. You know the type, chinos, shiny loafers and glistening white teeth.

However, one thing these men all had in common was their obsession with my hair. They would comment on how “soft” my hair is and how I should wear it like this or like that. Have I ever considered growing it out? Why don’t I wear it naturally? Is that my real hair colour? The questions were endless.

At university, I dated an aspiring archeologist who seemed very surprised at how soft my hair is. At the time, I was a bit baffled as to why this was even a thing. “It’s like a cloud!” he exclaimed once.

He even asked after my haircare routine and the shampoo I used. It felt too invasive, too personal and I would shake off his questions every time. I was young so I didn’t really understand just how problematic this was but I quickly learned as my experiences stacked up.

Fast forward a year and an older French man that I had met at a party was convinced that I must be “mixed with Indian” because my hair was not “Black hair”.

On this occasion, I didn’t say anything at all but walked away feeling hurt that it was the only thing he could say to me.

This aggressive line of inquiry worsened when I wore a weave. “Is that your real hair?” they would bellow. At least it felt like bellowing to me. “Yes,” I would reply coolly. “I bought it and so therefore it is mine.”

Why is it that, as a Black woman wearing extensions, I am somehow making a statement? Lots of women wear extensions – yet when I do it I’m battling some internal conflict about how I don’t really like my hair.

I would like to add that these are men from varying demographics. Not just white, not just young but absolutely presumptuous.

During a brief stint on a dating app, a perilous place for any woman of colour, I matched with a man with an impressive set of hair on his head. It was like an Afro halo. I waited patiently for him to message me first and, lo and behold, my phone pinged. “Free the afro!” was his first message. I wiped at my eyes in disbelief. Not quite the romantic first words I had envisioned. “Excuse me?” I replied incredulously. “You should embrace your natural hair,” he advised me, “Everyone wants it now.”

I swiftly unmatched, deleted the dating app, launched my phone across the room and contemplated going off the grid. I was seething. How dare this man assume anything about me let alone how I feel about my hair and what it means? I don’t even have an Afro!

People taking such a deep interest in my hair makes me feel as though I’m not entitled to an opinion about my own hair and that I don’t have any agency when it comes to how I should wear it. Because when it comes to Black women and our hair, the conversation is about us but it rarely involves us. I often wonder what this boils down to. Is it collective consciousness and guilt over the fact that we have so long been excluded from the ‘norm’? Is everyone now trying to ease their own guilt by reassuring us that we are in fact beautiful – especially when it comes to men gushing over our hair?

Perhaps it’s another form of ostracisation through stereotyping and people trying to pigeon-hole Black women by assuming we ALL have a difficult relationship with our hair. Or maybe it’s just plain ignorance. In any case, I feel exhausted by it all and it makes me even more cautious when pursuing new relationships with men.

You see, I have a totally ‘normal’ relationship with my hair. Sometimes I wear it curly; more often I don’t, but that’s because I am simply too lazy to maintain curly hair and I most certainly do not need a third party attempting to validate a part of my own body to me.

Like every young woman, I have a few recognisable warning signs when it comes to dating and if the person I’m courting comments on my hair type too early on then I keep my distance.

As a young woman of colour there are steps you must take to protect your peace. For me, I choose not to engage with any problematic one-sided debates about Black women’s hair anymore, and if that means not dating men who mention my hair, so be it.