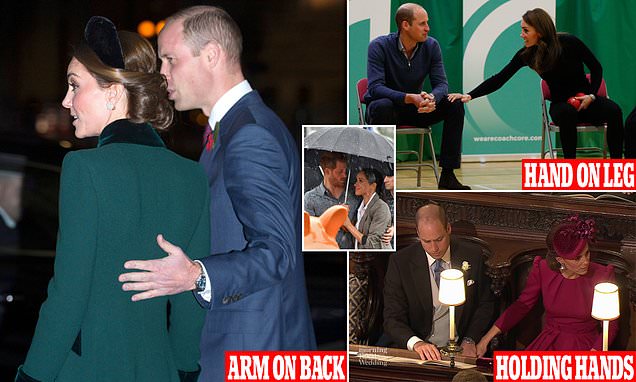 Anything Harry can do! How William has been inspired by his brother’s VERY public displays of affection with new wife Meghan (and it’s helped him and Kate ‘rekindle’ their romance)

When the Duke of Cambridge wrapped a protective arm around his wife during this weekend’s Armistice commemorations, it marked a dramatic departure for the couple.

Once known for his reserved approach to marital life, it seems William has been taking cues from his little brother by indulging in increasingly frequent public displays of affection.

In the months since Harry and Meghan’s nuptials, the newlyweds have raised eyebrows by holding hands, cuddling and gazing longingly into each other’s eyes during public engagements.

And it seems their relaxed approach to displaying their feelings has rubbed off on Kate and William too. 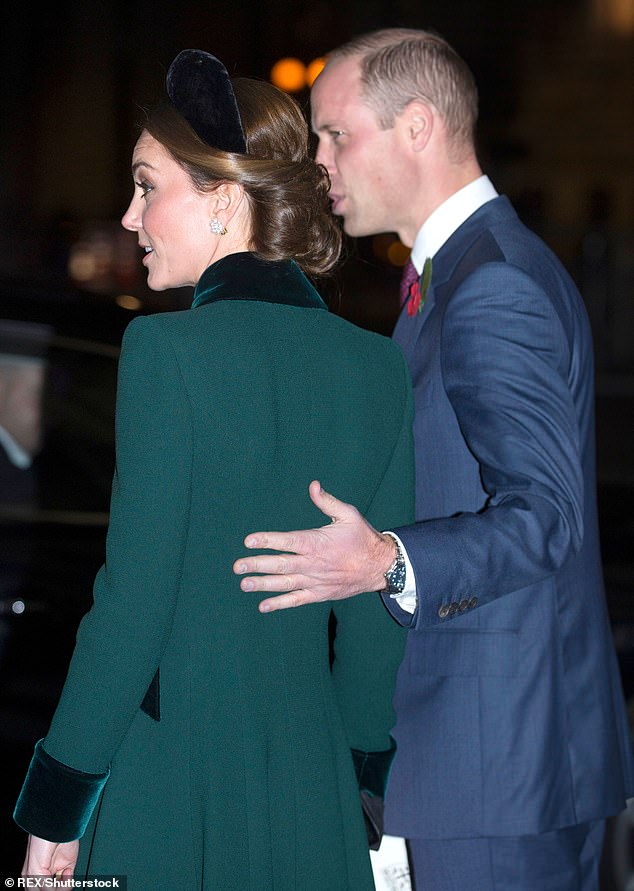 William and Kate in London this weekend. Body language expert Judi James says: ‘It’s unusual to see William taking the lead in terms of public touch rituals with Kate but on Remembrance Sunday he performed this back-touch ritual, even splaying his thumb out to signal a rather protective form of affection. These small touches appear to have had an effect on the couple’s other body language signals, too. Now that they are less obsessed with keeping to their more formal, non-tactile “rules” they tend to look happier and more relaxed together, too’ 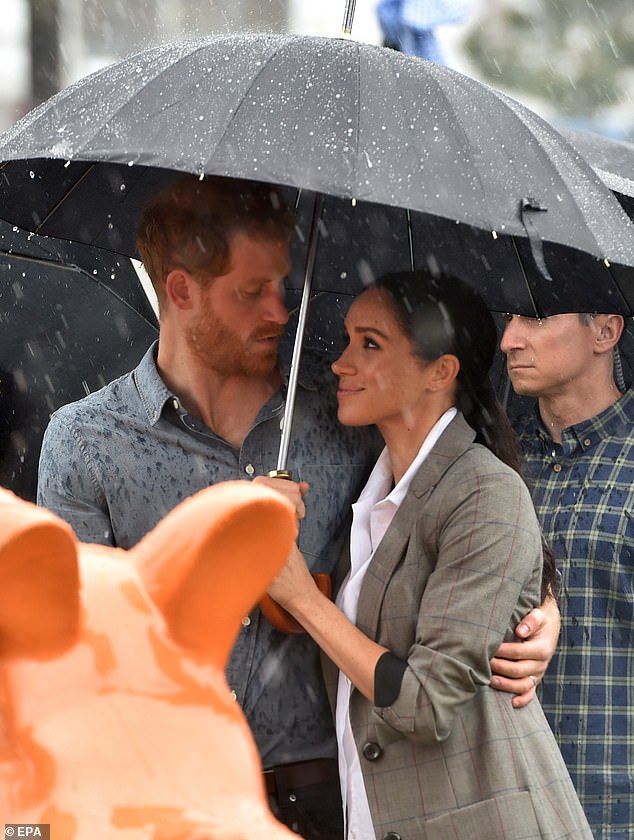 The Duke and Duchess of Sussex have made no secret of being in the honeymoon period, with frequent public displays of affection seemingly rubbing off on William and Kate too (Harry and Meghan are pictured here in New South Wales, Australia on 17 October)

Just a few days before the Westminster Abbey service Kate, who welcomed her third child in April, was pictured placing an affectionate hand on her husband’s knee during a visit to Coach Core in Essex.

And last month, in a major break from tradition, the couple were seen holding hands at the wedding of Princess Eugenie inside St. Georges’s Chapel, Windsor.

The Cambridges normally reserve such intimate gestures for major family photo calls, such as their engagement or welcoming to their children to the world on the steps of the Lindo Wing.

Onlookers noted that William had also placed a hand on the small of Kate’s back as they entered the chapel together on October 12. 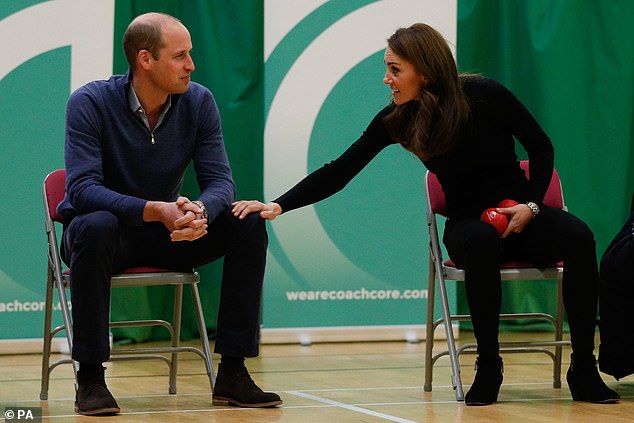 The Duke and Duchess of Cambridge at Coach Core, Basildon last month. Body language expert Judi James says: ‘Kate not only pats or clasps her husband’s thigh here, she leans across the wide spatial gap to do it too. This is a hefty tie-sign (a gesture of silent communication) between the pair but it is also a very strong signal of attraction, too’ 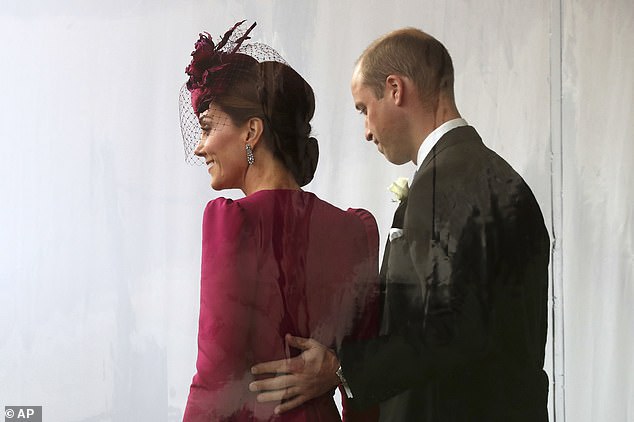 The couple at Princess Eugenie’s wedding. Body language expert Judi James says: ‘The back-pat steering/affectionate signaling gesture is a signature feature from Harry and Meghan’s body language rituals, with both using it to guide or protect or reassure one another on public outings. Meghan also uses it to define ownership via a quasi-maternal gesture. Suddenly though it has become popular with William and Kate. Kate’s pregnancy with Louis also seems to have prompted some of these openly affectionate signals from William, but it was the Meghan effect that clearly prompted most of the changes’

Yet this time last year, the couple’s body language could not have been more different; whether at a charity gala, a graduation ceremony or a meet-and-greet, they have consistently opted to keep a respectable distance in public.

Speaking to MailOnline FEMAIL, body language expert Judi James said: ‘Now that Meghan has joined The Firm, her own determinedly tactile behaviour with Harry does seem to have had a profound “echo” effect on William and Kate’s rituals.

‘Normally its a younger sibling that will mimic or mirror the older, but in Harry and William’s case it seems to be William taking his lead from his younger brother and his wife.’

Judi says this could also be down to the couple not wanting to offer any hints as to the state of their marriage in the manner of William’s parents, adding: ‘Diana and Charles created a body language soap opera with some expressive displays of non-verbal behaviour. 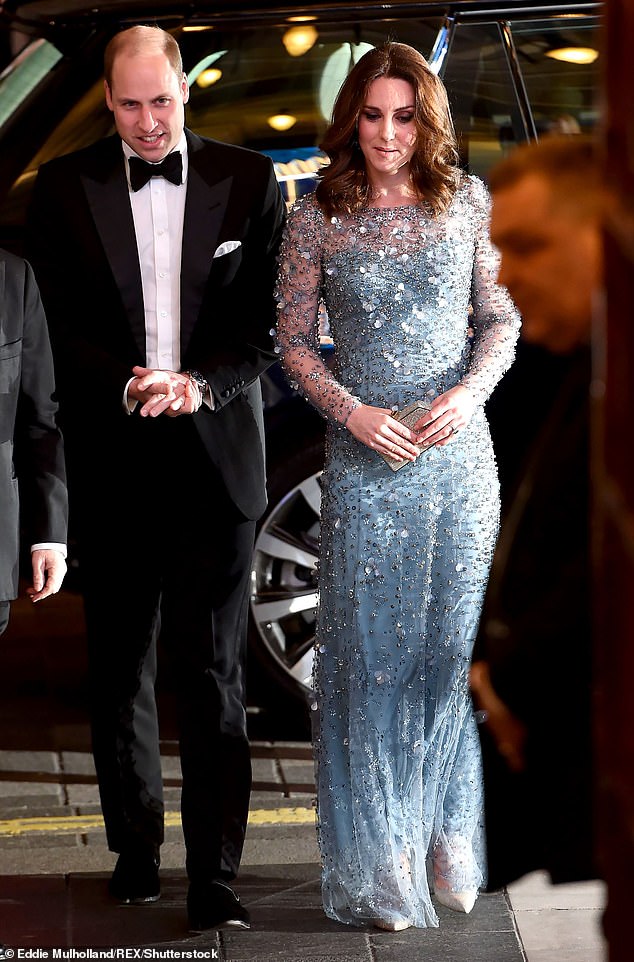 This time last year: The Cambridges at the Royal Variety Performance in November 2017, before Harry and Meghan went public with their romance. Body language expert Judi James says: ‘The couple’s avoidance of touch makes them look quite uncomfortable here. William is using a rather self-conscious and uncomfortable-looking hand rub/clasp while Kate uses her small clutch bag to keep both her hands employed’ 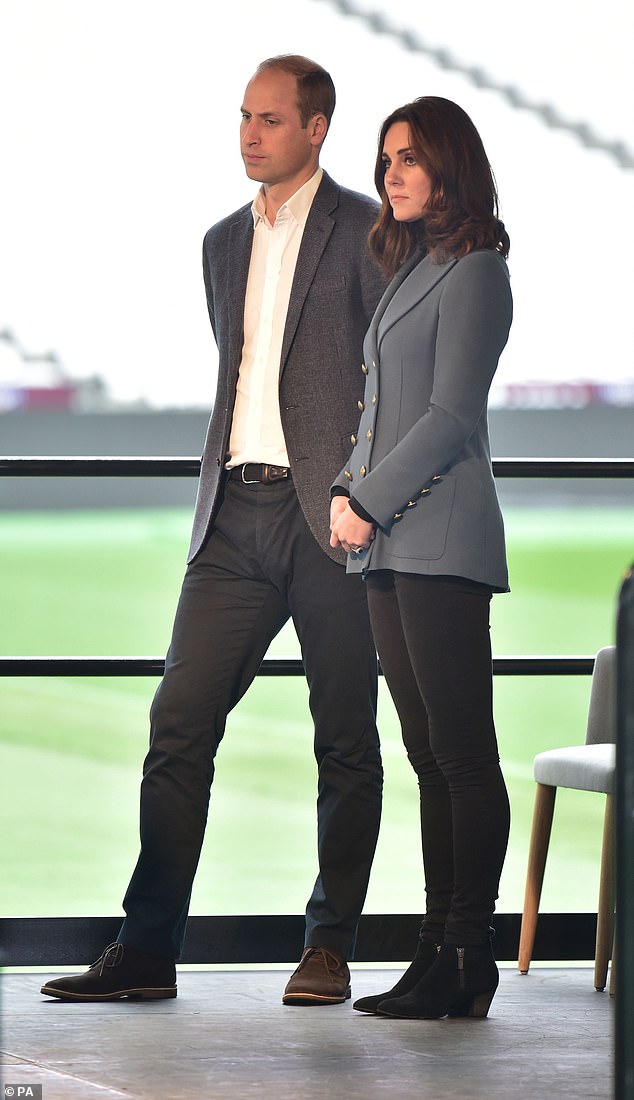 The Duke and Duchess of Cambridge in London, October 2017. Body language expert Judi James says: ‘Until recently this would have been a classic William and Kate pose. Although some of their overall mirroring suggests the strongest of emotional and intellectual ties their hands seem to have been placed in deliberately non-tactile mode. ‘William adopts his grandfather’s signature pose here with his hands clasped behind his back to ‘keep them out of trouble’, while Kate clasps hers in front of her torso to avoid any need for touch. These active avoidance tactics suggest the pair are normally tactile but were making a big effort to be hands-free in public’

‘William seems to have cautiously erred on the side of bland, with their total lack of PDAs meaning there have also never been signs of rifts, fallings-out or disagreements either.’

Judi adds: When a couple have been married several years it can often take family newlyweds like Harry and Meghan to rekindle some more public displays of romance like this.

‘It worked at an even higher level, too. The recent photo-shoot for Charles’s 70th birthday showed Camilla placing one hand on her husband’s thigh as they sat together too’