Dolly Parton wants you to know one thing about her phenomenal rise from growing up in a shack, in the foothills of the Smoky Mountains in Tennessee – one of 12 children of a father who could neither read nor write – to becoming a hit-maker of almost unparalleled staying power.

"People say 'How come all of this success happened to you?'" she writes in her memoir, Songteller, My Life in Lyrics, which came out this week. "Well, the answer is I gave up time with family and friends. I gave up vacations for work … One of my favourite lines I ever wrote is, 'I was gonna be rich, no matter how much it cost / And I was going to win, no matter how much I lost.'

"It's only in the wee hours, when you're fading off to sleep, that you ask, 'Is it worth the sacrifice?'" 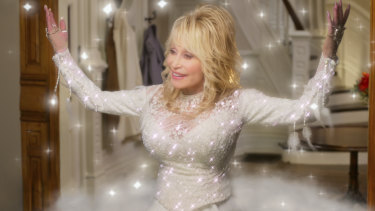 Dolly Parton in a scene from Dolly Parton’s Christmas on the Square, on Netflix. Credit:Netflix

This goes some way to explaining how Parton, 74, has gone from being a toddler who once tried to suckle milk from a pig to a writer of more than 3000 songs, winner of 10 Grammy Awards, and continuing star of movies, from 9 to 5, to Steel Magnolias, and her new musical, Dolly Parton's Christmas on the Square, out November 22 on Netflix.

But it doesn't answer one of popular culture's most confounding puzzles: why she is so beloved, globally, to people on diametrically opposed sides of politics and life experience.

Parton is held up as an unsung feminist hero to white working-class women (see the book She Come By It Natural: Dolly Parton and the Women Who Lived Her Songs, released in October) and embraced by the LGBTQI+ community (her Netflix series Dolly Parton's Heartstrings won an award at this year's GLAAD Media Awards). She is equally a hit in the conservative Christian music community, and an inspiration to Indigenous Australian artist Kaylene Whiskey, whose self-portrait, Dolly Visits Indulkana was a finalist in this year's Archibald Prize. Whiskey has said her paintings had come to life while listening to Parton's hits, such as Islands in the Stream and 9 to 5. 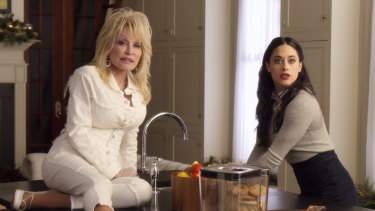 Parton with her Christmas on the Square co-star Jeanine Mason.Credit:Netflix

She was summed up by this New York Times headline last year: Is There Anything We Can All Agree On? Yes: Dolly Parton. So what is it about Parton that she is the great unifier?

"What's clever about her songs that appeal to a broad audience, is the audience needs to be able to attach their own story, or own meaning to it," says Donna Hewitt, a music lecturer at the University of New England, listing I Will Always Love You and Jolene as prime examples.The latter song has been recorded more than 400 times, by such diverse artists as Olivia Newton-John and The White Stripes.

It's a testament to the power of Parton's songs that they've been making people weep for decades.

In 1974, it was Porter Wagoner: the country music star gave Parton her big break in 1967 when he hired her to be the "girl singer" on his hit show, The Porter Wagoner Show, and he wept in his office when she sang I Will Always Love You, which she had written for him the night before. 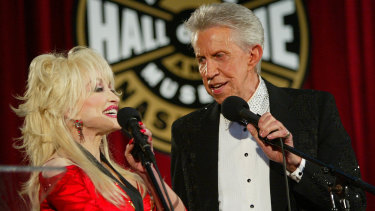 Parton with Porter Wagoner during his induction to the Country Music Hall of Fame in Nashville in 2003.Credit:AP

Last month, it was late-night talk show host Stephen Colbert: he took off his glasses and wiped his eyes with a tissue when she came on his show and sang Bury Me Beneath the Willow, a song Parton's late mother used to sing to her.

"Like a lot of Americans, I'm under a lot of stress right now, Dolly," Colbert said, laughing, while he wiped his eyes. "And you got under my trip wire right there … that was pretty beautiful." He added, "Now isn't it funny that sometimes there's nothing happier than a cry?"

Parton has had hardship after hardship to draw upon while singing and writing such songs, including the death of a newborn brother, her mother's depression, and her own, which spiked in the early 1980s when her career had hit a lowand she had a partial hysterectomy after being diagnosed with endometriosis. 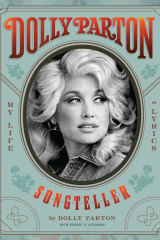 But she has also used this ability to her advantage over the years, which points to another quality that many attribute to her success: she's uncommonly savvy. She wrote I Will Always Love You for Wagoner in order to compel him to release her from the show and move on to greater heights after her success had eclipsed his – something he'd fought hard to prohibit her from doing. (It worked.)

And she has traditionally abstained from making overtly political statements – which could easily alienate her fan base – while still asserting progressive beliefs.

"She's very strategic … You can read between the lines, it's a progressive political stance, but she doesn't come out and say it," says Dr Toby Martin, contemporary music lecturer at the University of Sydney, referring to her 1968 song Just Because I'm a Woman, in which Parton sings to a man, asking why her reputation should be ruined because she's had sexual experiences before marriage, when he'd done the same thing. "She's not like Helen Reddy, she's not saying, 'I am woman, hear me roar.'"

As Parton writes in her memoir, of being asked if she's a feminist: "I don't like labels."

What Parton is, she admits, is steely.

"It does chop a lot of people up into little pieces, a lot of them are not strong enough to stand it," she told Nine's Karl Stefanovic about the music industry, in a three-part interview. (Nine is the owner of this masthead.)

"You got to keep your own counsel, you got to stay inside of and know who you are and you don't just follow everything – you don't just do everything somebody else is doing, or try to make yourself look smart," Parton says. "You need to know what you know. You need to know first what you know, and then learn all you can know, but you've got to kind of stay steady with that, or you will just follow a wagon off [the trail]."

This self-acceptance is something countless artists have said is what draws them to Parton, including Kristin Hahn, screenwriter of Netflix's 2018 hit Dumplin' about an overweight would-be pageant contestant who is obsessed with Dolly Parton.

Parton – who ended up writing the film's theme song with Sia – understands.

"They relate to me because I know who they are, they know who I am and, I think, I've often said, people don't come to see me be me, they come to see me be them," she told Stefanovic about her fans. "And I think we're all in it together."

Songteller, My Life in Lyrics by Dolly Parton, published by Hachette Australia, is out now.

Part two of Karl Stefanovic's exclusive interview with Dolly airs on Thursday on Today Extra, and will continue Saturday on Weekend Today.