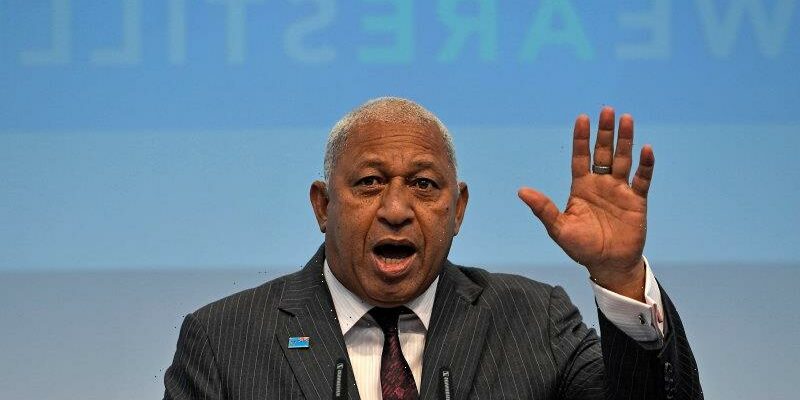 A little greyer and a touch softer than when he led a coup to take power for his first term in 2006, there was still a whiff of the hard man about him. 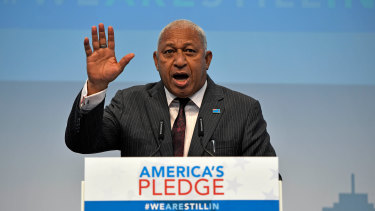 Pacific leaders, he said, were tired of commending the resilience of their people in confronting a warming world and the rising seas.

And then as current chair of the Pacific Islands Forum he listed priorities.

“Fiji and the Pacific’s demands are clear,” he said. “The developed world must deliver on the $100 billion dollars promised in climate finance.” He mentioned Australia and New Zealand specifically.

This language might have surprised international onlookers used to the climate debate focussing on emission reductions. And who is Fiji and its 13 Pacific partners to be issuing demands to the world?

Those with an eye on the history of high-stakes climate negotiations knew better.

You need to know a little climate politics to understand the flex.

The Paris Agreement today commits each nation to do their utmost to reduce greenhouse gas emissions in keeping with holding global warming beneath 2 degrees and as close to 1.5 degrees as possible.

Today that lower target, 1.5 degrees, has become the focus of the world’s discussion.

But leading up to the Paris climate talks in 2015, 1.5 degrees was barely even a consideration, even though climate scientists agreed it was the point at which we stood a better chance of avoiding potentially cataclysmic climate tipping points.

The target only exists in the Paris Agreement because of a diplomatic ambush set by one of the world’s smallest nations – the Marshall Islands, population about 60,000.

Then Marshallese foreign minister Tony deBrum recognised that while 2 degrees warming might be tolerable to other parts of the world, it would obliterate many Pacific communities and nations. 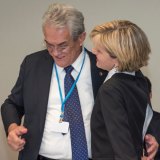 Under the slogan “1.5 to stay alive” deBrum began gathering support for an international coalition that would later become known as the High Ambition Coalition (HAC).

When the Paris talks began no one outside the group knew of its existence, but deBrum had already managed to secure the support firstly of Pacific island nations and then other small island countries in the Caribbean and Indian Ocean. Some African nations came on board later. The EU also backed the grouping, and when the negotiations started to bite, the group managed to pull the United States on board.

Finally, more than a week into Paris negotiations, the HAC “broke cover” as Dr Wesley Morgan, researcher at the Climate Council and research fellow at Griffith Asia Institute, put it in a recent essay in the Australian journal Foreign Affairs.

The moment was dramatic. DeBrum walked towards the final session of the Paris talks flanked by the Spanish politician serving as European energy commissioner, Miguel Arias Cañete, and the US chief climate negotiator Todd Stern. The three had palm fronds woven into their lapels to symbolise their common purpose. The Marshallese statesman also had the votes of 90 nations in his pocket.

Australia, the Pacific big brother that used to boast of punching above its diplomatic weight did not even know the bloc existed before this moment.

“We could not have gotten a Paris Agreement without the incredible efforts and hard work of the island nations,” said then US President Barack Obama the following year of the efforts of deBrum and the group he corralled.

Australia’s then foreign minister Julie Bishop announced that we too would join the HAC.

The problem was Australia was short on entry requirements.

“We are delighted to learn of Australia’s interest and look forward to hearing what more they may be able to do to join our coalition,” said deBrum.

So when laying out the demands of the Pacific Island Forum this week Bainimarama was not speaking, entirely, as a minnow in an ocean of whales.

And the $100 billion in climate finance he demanded was not a figure plucked from the sky.

He was referring to a commitment made by wealthy nations in previous climate talks that began to take shape in 2009, and that has never been met.

The agreement is based on a fairly obvious inequity.

Industrialised nations have been dumping greenhouse gases into the atmosphere since the industrial revolution, and have made themselves rich doing so. Poorer nations are only now going through that process.

The urgency of the climate crisis dictates that all nations must rapidly reduce their emissions, including – especially – emerging economies now reliant on heavy, dirty industry.

Recognising that greening the planet meant that poorer countries could not burn carbon as the richer world had, a payoff was agreed to during UN talks in Copenhagen in 2009.

A so-called Green Climate Fund would manage the effort.

The problem was, says one of Australia’s former chief climate diplomats, Professor Howard Bamsey, the language built into the agreement to ensure it won support, was loose enough to be almost meaningless.

Mobilise, he says, “is one of those UN verbs, so you have to parse it very carefully”.

It was never made clear, he explains, if “mobilising finance” meant giving grants or facilitating cheap loans or creating policies to help funnel private money.

Whatever it means, no matter how hard you “parse it”, you never get anywhere near $100 billion a year on a ledger.

It is hard today to work out how much money was ever secured. By some counts the most funding achieved in a year was $20 billion. By a recent OECD analysis it is closer to $80 billion, if you count finance channelled directly between nations rather than through the Green Climate Fund.

But Bamsey says the purpose of the fund was more than a practical climate response. It served to bind nations in common effort, and its failure to date is a blow to the global climate accord.

Australia once placed itself at the heart of the project, recognising it as an effective way to channel global support for the Pacific. Bamsey himself was appointed executive director of the GFC in 2016.

In an early round of funding Australia committed $200 million to the effort but in 2018 Prime Minister Scott Morrison said during a radio interview with Alan Jones that kicked off with a discussion of their mutual support for a horse racing advertisement to be projected onto the sails of the Opera House that Australia would no longer be contributing to “that big climate fund”. 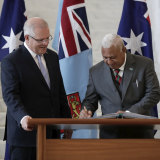 Prime Minister Scott Morrison and Fiji’s Frank Bainimarama during his official visit to Parliament House in Canberra in 2019. Credit:Alex Ellinghausen

Later in Senate estimates hearings foreign affairs staff confirmed that this comment constituted the announcement that Australia would no longer be part of the Green Climate Fund, though the nation’s foreign aid to the Pacific continued.

DeBrum died in 2017. He’d perhaps be surprised to see how much the world has changed since then.

Carbon emissions are still trending up rather than down, but there is now a consensus that clean energy is cheaper than dirty alternatives. Around 70 per cent of the global economy exists in jurisdictions that are committed to reducing emissions to net-zero by 2050.

Both the United States, the world’s largest historical emitter of greenhouse gases, and China, the current one, back rapid decarbonisation.

We don’t know if another bloc like the High Ambition Coalition is being quietly built as Glasgow approaches, or what the HAC itself has planned.

We know that Italy has become a crossroads for international officials this month as it prepares to hold G20 talks and act as co-host to the COP26 conference in Glasgow in November.

And, due to a Twitter post by Grenada’s environment minister Simon Stiell, we know that in Milan this week US President Joe Biden’s infamously indefatigable climate envoy John Kerry made time to meet with another negotiator, the Marshall Islands climate envoy Tina Stege.