If the Australian property market were a party, it’s at that point where the drinks should be put away, the guests kicked out and the bed turned down for a good night’s sleep.

Unless the Reserve Bank, the Australian Prudential Regulation Authority and federal and state governments step in soon, the country is going to wake up with a hangover that will last for years. 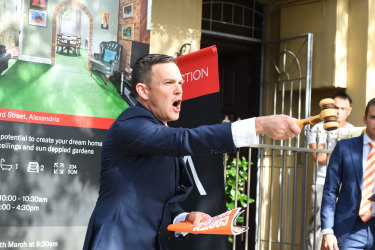 Capital city house prices have climbed at their fastest rate since 1988, on the back of record low interest rates and government programs.Credit:Peter Rae

CoreLogic data showing the biggest monthly increase in capital city property values since Kylie Minogue’s insufferable I Should Be So Lucky spent six weeks at the top of the Australian charts in 1988 is a sign of something very much amiss in the property market.

In Melbourne, the increase has not been quite as sharp but at $60,000 since New Year’s Day, the median house value could top $1 million by Christmas Eve.

But this is not just a story about our capitals.

The RBA, and others, have maintained for years that one of the factors behind high house prices is planning and public transport access in our most populous cities.

That 61 sub-regions, from Ballarat and Bendigo to the far west of NSW, hit their highest median prices on record during March shows this is a nation-wide house party.

It is being fuelled by three key factors – record low interest rates, all the cash saved by households during the coronavirus recession, and government programs aimed at the property market.

Figures from the National Housing Finance and Investment Corp show the combined value of all the government programs thrown at first-home buyers amounted to $86,000 in Victoria, $85,000 in NSW and a nation-high $88,000 in the Northern Territory.

Those programs are starting to ease (the federal government’s HomeBuilder grant of $15,000 ended this week) but they will weigh on the market for some time.

All this increase in prices has taken place at a time of record low wages growth.

Ordinarily, good wages growth would reduce the proportion of weekly income thrown at the mortgage. But without that growth, those mortgage repayments are going to weigh on households for longer.

And that’s not taking into account any possible future interest rate increase.

The RBA and APRA both say they do not target house prices (while governments of all persuasions love ever-increasing prices).

A confluence of events, all linked to the coronavirus recession, has got us to a point where house prices are going up and creating an affordability crisis for future generations.

Someone, however, will have to turn the lights out on this party or the guests will never leave.